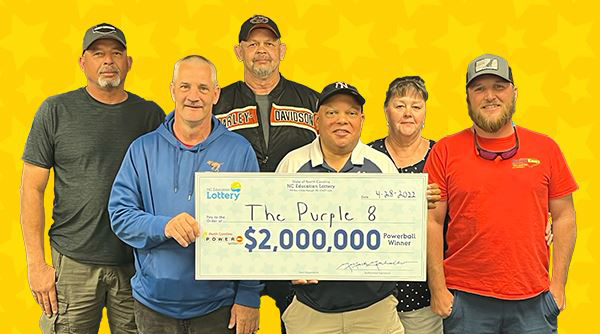 But he didn’t just dream about winning it — he also dreamed that he knew exactly where to buy the ticket.

In his dreams, the winning Powerball ticket would be sold in Fayetteville.

“So I bought at least one ticket in Fayetteville for each drawing,” Walker, a Raeford resident, said he told lottery officials in an April 28 news release.

Those dreams led him to a $2 million win, and it’s not a prize he’s keeping all for himself.

Walker has been playing the lottery for years — but not alone. He’s part of “The Purple 8,” a group of FedEx workers who live in North Carolina and all play together, lottery officials said.

The Purple 8 has been playing as a group for about three years, according to lottery officials. They all work at FedEx Freight in Hope Mills but live in Cumberland, Robeson, Hoke, Bladen and Richmond counties.

Walker bought the lucky ticket at a Harris Teeter in Fayetteville, according to lottery officials. When he realized how much he won, he said he was in shock.

“My girlfriend ran into the backyard screaming and yelling,” Walker told lottery officials.

The seven other coworkers in The Purple 8 are Robert Peterson III of Fayetteville, Phillip Freeman of Rowland, Derick Hunt of Lumberton, John Oxendine of Lumberton, Catherine Simpson of Raeford, Tharp Bordeaux of Elizabethtown and Mickey Sessoms of Marston.

The group went to the lottery headquarters in Raleigh and split their prize eight ways, lottery officials said. Each member took home $177,525 after taxes.