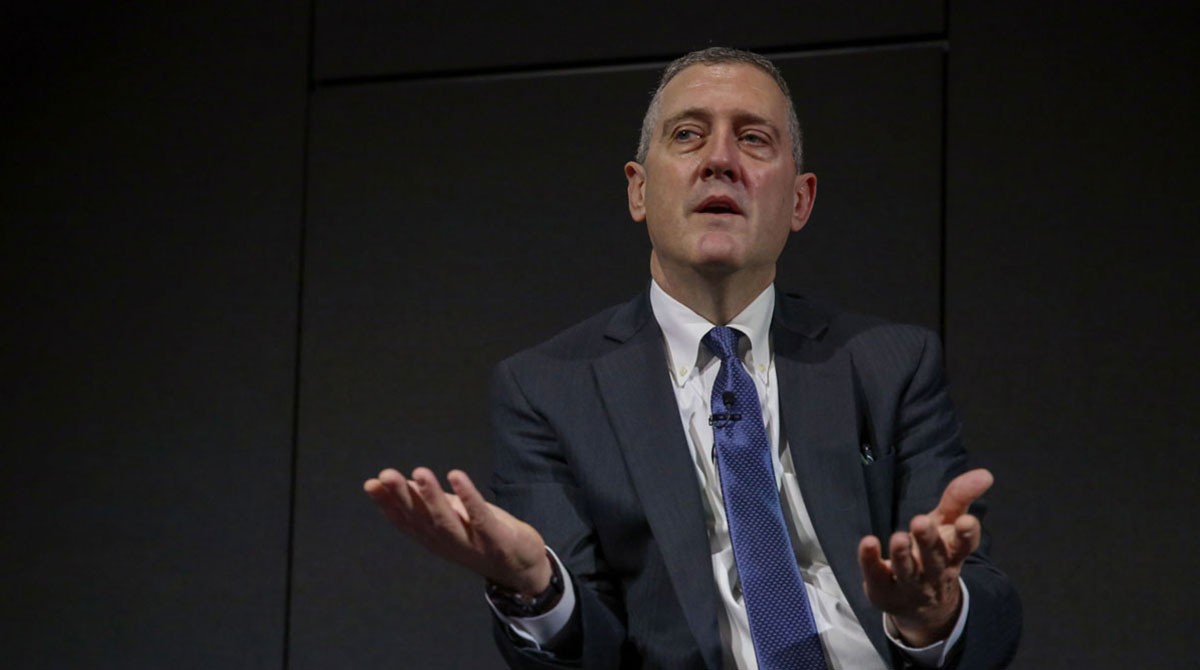 James Bullard, president and CEO of the Federal Reserve of St. Louis, gestures during a conference in October 2019. (Luke MacGregor/Bloomberg News)

Financial markets are flashing signs that an economic downturn could arrive sometime next year, as Americans grapple with the highest inflation in four decades and the Federal Reserve pushes borrowing costs higher. But Bullard said in an interview with the Associated Press that the central bank wouldn’t have to drive the economy into a recession or significantly raise unemployment to bring inflation down to its 2% target.

“Now we have lots of inflation, but the question is, can we get (inflation) back to 2% without disrupting the economy? I think we can,” he said.

Bullard’s optimism coincides with a rapid pace of interest rate increases by the Fed, intended to combat the highest U.S. inflation in 40 years.

Higher rates limit the ability of consumers and businesses to borrow and spend, which can cool growth and inflation. But they also carry the risk of tipping the economy into a downturn.

Consumer prices rose 8.6% in May compared with a year ago, and a government inflation report July 13 could show that they’ve ticked higher.

The Fed typically moves rates in quarter-point increments, but Chair Jerome Powell has said the Fed wants to move “expeditiously” to a level of about 2.5%, which would neither stimulate nor restrain growth.

On July 8, the government’s jobs report showed employers added 372,000 jobs, a healthy increase, while the unemployment rate remained at 3.6% for the fourth consecutive month, slightly above the five-decade low reached just before the pandemic.

The robust figures contrast with signs of a softening economy, from falling home sales to declining factory production to slower consumer spending. The economy contracted in the January-March quarter and real-time data trackers, such as one maintained by the Atlanta Federal Reserve Bank, suggest it did so again in the April-June quarter.

Two quarters of shrinking output would meet one rule of thumb for a recession. But the official definition of a recession, set by the National Bureau of Economic Research, looks at a much broader range of data to determine whether a downturn has occurred.

Bullard said that other measures of the economy, such as a broad measure of workers’ and business’ incomes, suggest the economy likely expanded in the first six months of this year. Businesses and other employers also added 2.7 million jobs during that time, a robust total that reflects an optimistic outlook among businesses.

“It just doesn’t seem like the U.S. economy has been in recession for the last two quarters,” Bullard said.

Other Fed officials have said that they support a three-quarters of a point increase in the Fed’s rate in July, including Federal Reserve Bank of Atlanta President Raphael Bostic.

“I’m fully supportive of moving 75 basis points,” Bostic said on financial network CNBC Friday, using financial terminology for a three-quarter point hike. “The tremendous momentum in the economy to me suggests” that the Fed could implement such an increase “and not see a lot of protracted damage to the broader economy.”