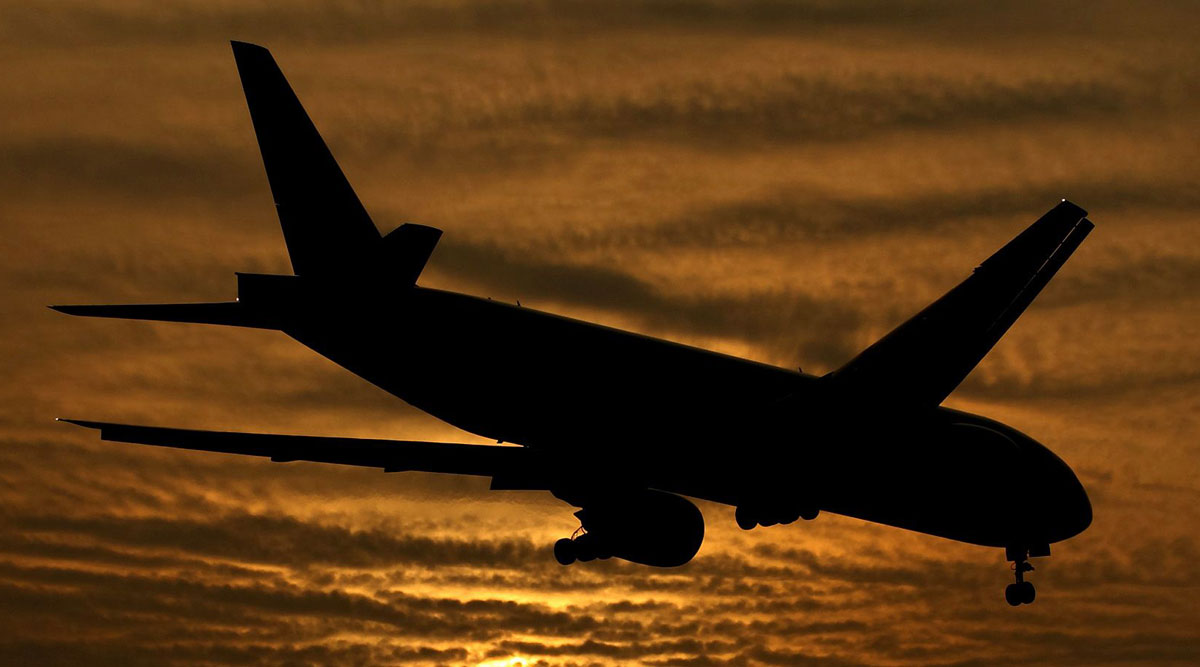 A plane silhouetted in the sky. (SeongJoon Cho/Bloomberg News)

The fatal crash of a cargo plane last year was caused in part by the failure of the U.S. federal government to establish a reliable system of weeding out unqualified airline pilots, investigators concluded.

The Federal Aviation Administration came under heavy criticism July 14 as the National Transportation Safety Board issued its findings in the fatal crash of a cargo jet carrying Amazon.com Inc. packages near Houston.

The lack of an improved system for tracking pilot records — despite a decadelong congressional mandate — has created “holes in the safety net,” NTSB Chairman Robert Sumwalt said at a video hearing. “The FAA has dragged their feet on implementing a sufficiently robust pilot-records database.”

The copilot of an Atlas Air cargo plane who inadvertently added full power during a routine approach to land in Houston became disoriented and pushed the Boeing Co. 767-300 into a steep dive, NTSB found.

He had repeatedly panicked during training exercises and shown other deficiencies, and those systemic issued hadn’t been addressed, NTSB found.

His failures while training with at least two prior airlines weren’t known to Atlas, a division of Atlas Air Worldwide Holdings Inc., because he hadn’t disclosed that, and there was no FAA system for checking. He died in the crash.

While the Feb. 23, 2019, flight that crashed was only carrying packages, the issue is an industrywide problem because passenger carriers rely on the same flawed system, according to the NTSB.

All five board members criticized the FAA for its slow pace adopting a better system for checking pilot records and voted unanimously to toughen the findings to specifically include the regulator’s inaction as a contributing factor in the accident.

There have been 10 airline accidents over the past 30 years in which pilots with prior performance issues were identified as part of the reasons for the crash, Sumwalt said.

The FAA expects to finalize its new system by January, it said in an emailed statement. “The rule includes the requirement that industry provide pilot records” to the new database so they can be shared among carriers, the agency said.

Carriers can now voluntarily access the database for some agency records, FAA said.

Congress ordered the agency to create a new system in 2010 following a 2009 crash near Buffalo, N.Y., that killed 50 people. The Colgan Air captain on the flight with a lengthy history of training failures caused the plane to go down, NTSB found. Lawmakers later imposed a 2017 deadline after the agency didn’t respond fast enough.

The Atlas Air plane reached speeds of about 500 miles per hour during its abrupt dive, according to NTSB data. It had been approaching Houston’s George Bush Intercontinental Airport on a flight from Miami.

All three aboard the plane died: Captain Ricky Blakely, copilot Conrad Jules Aska — who was at the controls — and a third pilot for another airline, Sean Archuleta, who was sitting at the rear of the cockpit. The impact littered a bay near Houston with packages and debris.

While the captain attempted to pull the plane out of its dive, the safety board faulted him as well for acting too late.