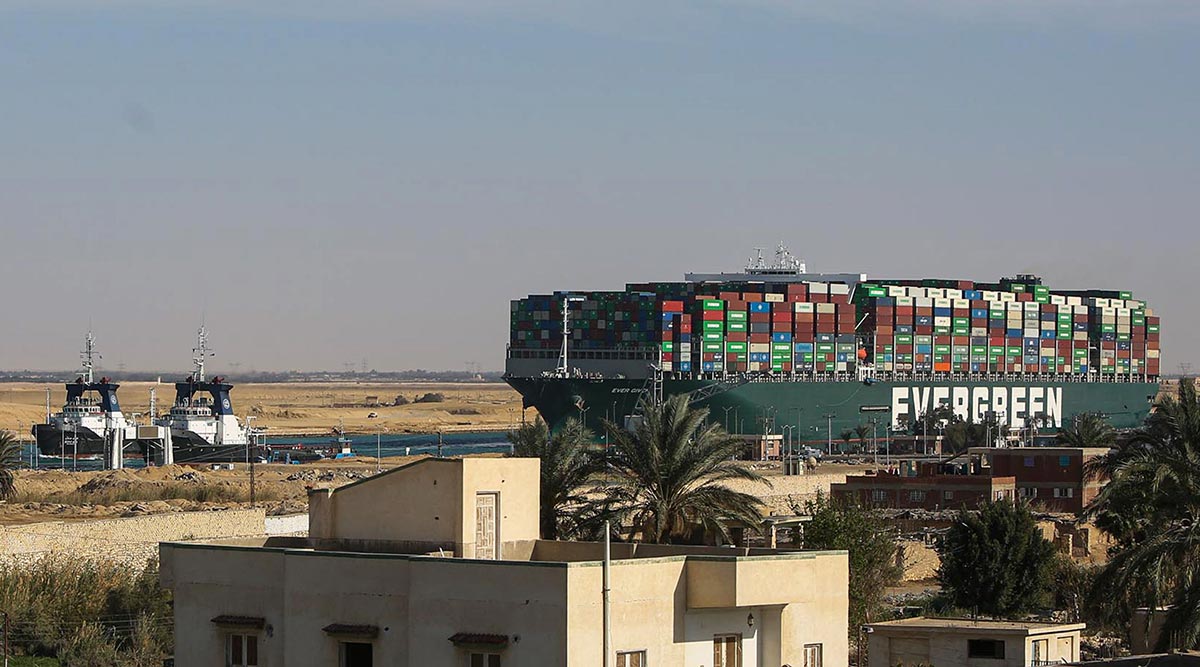 Tug boats pull the Ever Given containership along the Suez Canal after being freed from the canal bank in Suez, Egypt, on March 29. (Islam Safwat/Bloomberg News)

Egypt seized the giant container vessel that blocked the Suez Canal last month as part of an effort to get more than $900 million in compensation.

A court in the city of Ismailia granted a seizure request regarding the Ever Given vessel at the behest of the Suez Canal Authority.

Egypt’s move underscores the legal complications following the container vessel’s grounding on March 23, which closed the canal for six days and roiled shipping markets. Logjams are expected to continue in the coming weeks at major ports such as Singapore and Rotterdam because of disruptions to schedules, according to supply-chain data provider project44.

The 25 Indian crew members remain on board the ship, which is in the Great Bitter Lake, about halfway along the canal.

The ship’s insurer for third-party losses, the U.K. P&I Club, said in a statement that the owner received a claim for $916 million.

“Despite the magnitude of the claim, which was largely unsupported, the owners and their insurers have been negotiating in good faith with the SCA,” the statement on April 13 said. “On 12 April, a carefully considered and generous offer was made to the SCA to settle their claim. We are disappointed by the SCA’s subsequent decision to arrest the vessel today.”

The U.K. P&I Club also said it was “disappointed at comments by the SCA that the ship will be held in Egypt until compensation is paid, and that her crew will be unable to leave the vessel during this time.”

The manager of the ship, Bernhard Schulte Shipmanagement, said it was “extremely disappointed” with the arrest of the ship.

“BSM’s primary goal is a swift resolution to this matter that will allow the vessel and crew to depart the Suez Canal,” CEO Ian Beveridge said in a statement.

The SCA has said compensation is needed to cover losses of transit fees, damage to the waterway during the dredging and salvage efforts, and the cost of equipment and labor. It has calculated that it missed out on about $15 million of transit fees each day.

The U.K. P&I Club said the claim included a $300 million salvage bonus and another $300 million for loss of reputation.

The SCA didn’t include the salvager’s claim for its services, “which owners and their hull underwriters expect to receive separately,” the U.K. P&I Club said. “The grounding resulted in no pollution and no reported injuries.”

US Seeks to Lower Spiking Shipping Costs With Competition