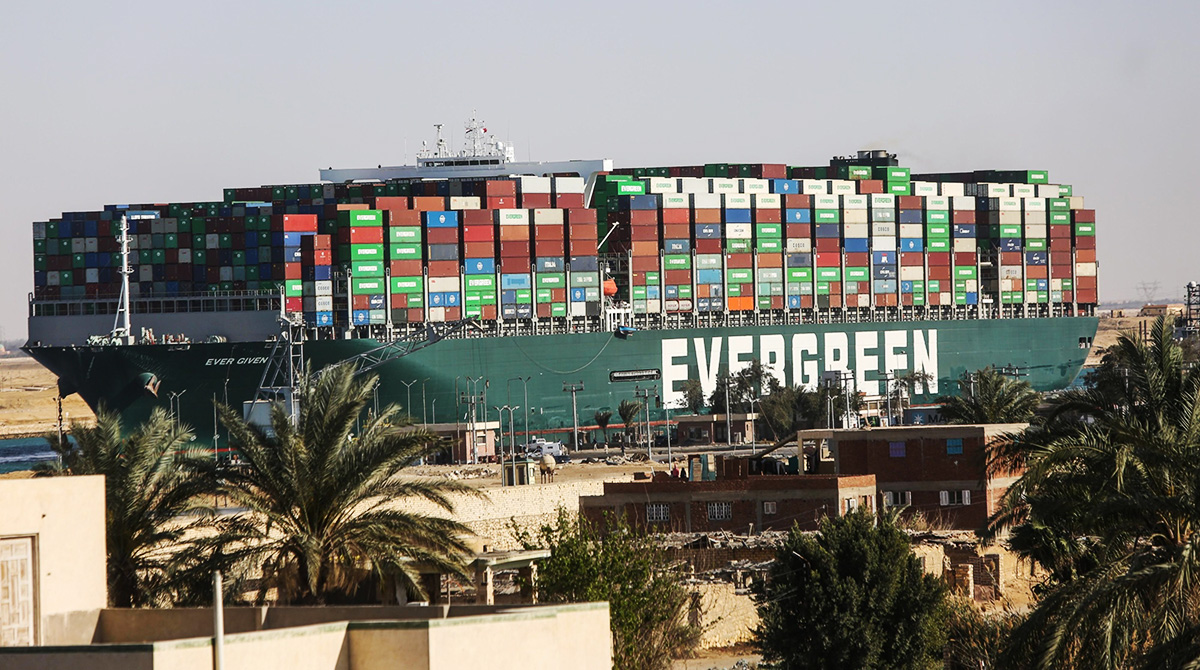 The Ever Given containership moves along the Suez Canal toward Ismailia after being freed from the canal bank in March. (Islam Safwat/Bloomberg News)

For a nation that provides safe passage for so many ships through its waters, Egypt offered up rather special treatment for the Ever Given.

The 400-meter-long containership began its voyage out of the canal July 7 after a ceremony attended by dignitaries, diplomats and company officials from around the world. The last time the Suez Canal Authority, which hosted the event, produced this much fanfare was in 2015, when an $8 billion expansion project was completed within a year. The ship is slated to sail into the Mediterranean and then to Rotterdam, Netherlands.

This time though, the event was as much about closure as celebration. Because it was the Ever Given, the giant Japanese-owned vessel carrying some $1 billion worth of cargo, that last March lost control as it traveled north through the canal, crashing into the banks and blocking the waterway like a giant cork for nearly a week. The incident roiled global markets and transfixed the world.

The containership was held by the Suez Canal Authority since it was dislodged in late March due to a dispute over compensation.

In a recorded comment, Yukito Higaki, president of the ship’s owner, Shoei Kisen Kaisha Ltd., voiced gratitude to the canal and to Suez Canal Authority chief Osama Rabie personally. Separately, Khaled Abu Bakr, the authority’s chief attorney in the case, said their negotiations wouldn’t have been possible had it not been for the “unprecedented skills” shown by canal engineers in their efforts to free the ship.

The Ever Given has finally left the Suez Canal.

The container ship was held by the Suez Canal Authority since it was dislodged in late March due to a dispute over compensationhttps://t.co/gKmSqkMcmN pic.twitter.com/rPmbnRyr39

“The Suez Canal Authority and all its employees were in a difficult test in front of the world and a race against time to open the navigation artery, the lifeblood of the world,” he said.

The ceremony and signing of the deal capped an episode that had turned into a public relations crisis for the overseers of the waterway and, by extension, Egypt itself.

Financial details of the agreement weren’t disclosed, but Rabie said the owner had paid most of the money before the Ever Given’s departure, and the rest was expected this month. He also said the company would give Egypt a new tug boat.

Freeing the ship just six days after the incident last March may have won the authority some kudos at the time, as well as providing relief for the estimated $10 billion worth of marine traffic that built up each day. What happened next, in terms of determining blame and compensation, carried an equally high premium for Egypt, both domestically and abroad.

With the eyes of the world upon them, canal employees, along with outside help, worked around the clock to free the Ever Given. Often risking their lives, workers ensured that there was minimal damage to the ship, its 17,600 containers and the canal itself. In the end, the heavens offered a helping hand when unusually high tides allowed teams to refloat the vessel.

Just as tricky as freeing the ship, though, was the process of disentangling the arguments about blame and compensation.

Egypt had dodged a bullet by freeing the Ever Given so quickly and clearing the backlog of more than 400 ships delayed by the incident. It then had to walk the line between recouping losses, both physical and perceived, and ensuring that it didn’t appear to give up its rights before a global audience or, at the same time, alienate its clients.

Meanwhile, for the ship’s owners and insurers, it boiled down to a more basic calculus: What could or should they pay?

As the issue moved to the Egyptian courts, which ordered the Ever Given seized pending a resolution, the stakes grew on both sides. Egypt wanted more than $900 million. The counteroffer was around $150 million. A revised figure of $550 million was put forward.

While Rabie said in an earlier television interview the settlement figure was near that amount, he and others declined to confirm it during the signing event.

But there was always more to the issue than money for Egypt.

While earnings from the Suez Canal are a key source of foreign revenue for the country, credibility is priceless. It is something President Abdel-Fattah El-Sisi has been working to shore up.

Under his leadership, the canal-expansion project has been one of several major infrastructure efforts launched to the tune of hundreds of billions of Egyptian pounds. After the Ever Given incident, plans for another expansion were proposed.

The desire to project a new, modern Egypt, required the same of its officials and their ability to handle a crisis. That was made clear by El-Sisi in one of his conversations with Rabie during the effort to free the Ever Given.

The president says he asked the canal chief what the most challenging aspect of refloating the vessel might be. Rabie said it would be the offloading of the containers, a process some said may take up to three months.

“Let’s be ready,” the president says he told Rabie. “Whatever it costs, we have to be ready in a crisis like this.”