COLORADO SPRINGS, Colo. — The growing importance of fleets being able to regulate the speed of individual trucks through remote, over-the-air engine updates should be taken into account as the federal government considers a mandate requiring heavy-duty vehicles to utilize speed limiters, the president of Daimler Trucks North America said.

Martin Daum said DTNA maintains a neutral stance on the issue of a mandate and could easily comply with a final rule if and when one is issued. 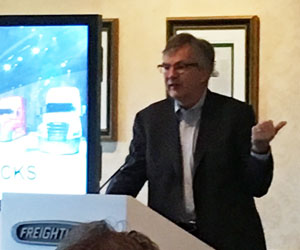 However, during a Sept. 1 interview with Transport Topics after the launch of the new Freightliner Cascadia, he outlined several potential pitfalls with a mandate that left him “hesitant.”

An Aug. 26 proposal from the U.S. Department of Transportation called for a speed limiter on trucks, and sought feedback on maximum speeds of 60, 65, and 68 miles per hour.

“A market-driven, smart solution is always better than a rule,” Daum said, because with a rule comes requests for exceptions and a need for enforcement.

Daum said many fleet customers have their own set speed limits, and they gain from the “good economic behavior” of higher fuel efficiency at lower speeds.

He is concerned the effect a mandate could have on a just-in-time delivery model, which is “huge in the entire economy” and can be aided by remote engine updates.

Daum used the example of a company that has chosen 63 mph as its top speed for the entire fleet. However, he said, if a truck with time-sensitive freight gets caught in traffic, fleet managers could temporarily adjust engine parameters to boost that speed closer to a highway’s limit through a telematics system to improve the likelihood it arrives on time.

He also said a European mandate limiting large trucks to about 54 mph has created a speed differential between passenger cars and trucks that “is the biggest reason for congestion” on that continent’s highways.

In the United States, DOT’s proposal is not expected to include language requiring the device to be tamper-proof. Daum said a desire for tamper-proof limiters is well intentioned but would raise complex legal questions.

“Why should I be responsible if someone violates a law?” he asked. “I put [a limiter on a truck] which really respects the law and someone breaks the law by reprogramming it, so is it now my responsibility to assume that you are a criminal and then I make sure that you can’t do illegally what you want to do?”

He said he cannot see any situation where a true driverless truck is operating on U.S. highways. He also was skeptical of a scenario in which a trucker was “absolutely not paying attention” to the road.

However, looking out six to 10 years, Daum forecasted a scenario in which drivers’ feet are spending much less time on pedals.

“A truck can brake safer and it can accelerate more economically than any human foot can do — even the most experienced one,” he said.

Daum said he “could see platooning, where the first truck is driven by a driver and in the second truck, the driver is sleeping. That is for me not autonomous because the human brain makes all the crucial decisions.”

He labeled a two-truck platoon an electronically-controlled, 160,000-pound combination that could split anytime, which is “better than a truck with four trailers and it is easier to maneuver, but the first one is making all of the decisions for the second one.”

Still, before that could become reality, the system must become foolproof so there is never a headline about a highway accident that reads: “Robot Kills Man,” he said.

During the interview, Daum also said DTNA is continuing to undertake a page-by-page review of the final rule on greenhouse gas emissions through 2027 issued in August but remains pleased it will provide a “stability for the next 14 years"

The more than 1,500-page rule from the Environmental Protection Agency and National Highway Safety Administration shows that the agencies were extremely thorough, Daum said. He also reiterated DTNA’s previously announced endorsement of the rule.

“We can reach the [emission reductions] with current technology that has to evolve certainly, but we won’t have a disruptive change,” he said.

When fully implemented in 2027, the rule seeks reductions in carbon dioxide output and fuel use of 25% by highway tractors, including engine improvements, and 24% by vocational vehicles — compared with 2017 vehicles.