Driverless Trucks: A Seismic Shift for the Labor Force 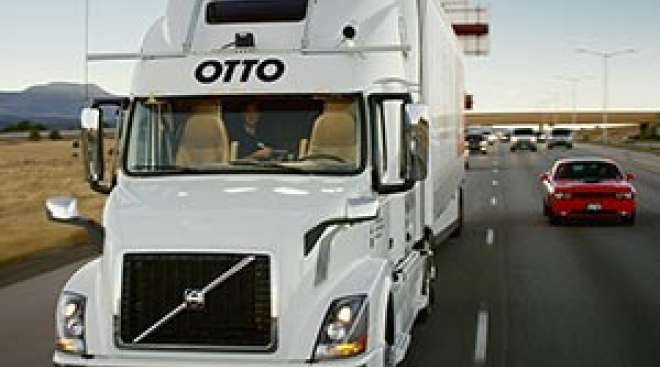 For decades, trucking has provided big-rig driver Frank Mora and his family a decent living. He doesn’t expect that will last forever.

Test models of cars that will whisk passengers around town without a human at the wheel have attracted much media attention. But it’s apparent that when driverless vehicles hit the road for real, they’ll be driven by commerce, and that means trucks will likely lead the pack.

Mora, whose family has been in the trucking business for three decades, said he can easily understand the appeal of a machine that can be run 24 hours a day without forced breaks for rest and with less labor. The technology is already out there.

From completely driverless big rigs to platooned trucks that could be manned by a single driver and eventually automated, the testing is under way.

“Sure, as an owner I could save a lot of money on wages,” he said. “As to whether I think it’s safer, it’s too soon to tell. I am sure that there are ... maneuvers that only humans can do.”

Success for the technology could summon a seismic shift for California’s 218,000 truck and delivery drivers — 2.5 million across the nation — according to the latest count from the Bureau of Labor Statistics.

“This is not the far future,” said Xiao Yun Lu, a research engineer at Partners for Advanced Transportation Technology at University of California, Berkeley. “This is the near future.”

The economy churns on the goods truckers carry to markets, retail stores and, increasingly, directly to consumers. Many believe automation can make the business safer, cut operator costs and address intermittent shortages of truck drivers.

“There is a very strong commercial motivation,” said Steven Shladover, a research engineer and manager at PATH. “[Trucks] are out there on the road all day and every day, unlike passenger vehicles, which are parked 95% of the time. When people buy trucks, they are looking for a return on the investment.”

“There is nothing we can do to stop it or change it,” said 28-year-old driver Mora, who spent much of his childhood inside the cab of an 18-wheeler, “but with change there is always opportunity.”

• Otto, a subsidiary of Uber, tested an automated truck with a 120-mile beer run across Colorado last year.

• Freightliner, a truck produced by Daimler Trucks North America, glided across the Hoover Dam in 2015.

• Startup Starsky Robotics last week announced it is testing a kit for trucks that will allow big rigs to drive alone on highways, remotely controlled.

While self-driving cars offer the prospect of making roads safer and reducing traffic, these hulking trucks promise commercial benefits that could hasten their development.

“Platoons” could lead the pack. Volvo Trucks was one of six truck manufacturers that in 2016 rolled out partially automated big rigs across Europe so regulators could test their ability to safely caravan. The testing went smoothly, but in Europe, as in the United States, regulators are still grappling with how to handle vehicles that soon won’t need humans.

The technology, known as platooning, allows two or more cargo trucks to ride in tandem, talking to one another. It’s considered one of the lowest levels of automation, including some simple features already known to drivers of luxury vehicles, such as automated braking. Analysts believe platoons have the potential to come to market more quickly because of fewer regulatory hurdles. Several states already have adopted legislation allowing variations.

RELATED: Robots could replace 1.7 million American truckers in the next decade

What’s the hurry? Savings. Platooned trucks drive tightly together, cutting as much as 20% in fuel costs, by some estimates. And one of trucking companies’ biggest expenses is what goes in the tank, according to the American Transportation Research Institute.

Can these packs of trucks maneuver successfully without help from human hands? That’s one question Caltrans officials will be looking at when they oversee a federally backed test of a three-truck Volvo platoon, starting March 15.

It will be the first time platoon driving will be tried in Southern California. The trial will focus on how safe these vehicles can be with other cars weaving in and out around them.

“These trucks are not going to be taking away jobs,” said Aravind Kailas, a U.S.-based technology planner at Volvo. “It’s targeting safety to get on the road.”

In the trials, drivers will sit behind the wheels of three 53-foot Volvo big-rig trucks. All will steer the vehicles, but the second and third driver won’t touch the gas or break pedal.

The test will be similar to the drill staged in Rotterdam but with a much shorter route, along the 110 Freeway to the Port of Los Angeles, where hundreds of cargo-loading trucks stream in and out of daily.

They will communicate through a complex system of radar, cameras and Wi-Fi.

This won’t be a test for speed. None of the trucks will travel faster than 55 mph.

“The No. 1 thing we want to show,” Kailas said, “is that this is a technology that is targeting safety,” 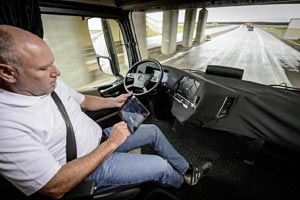 “Everything is pretty much possible,” said Wokil Hayder, director of autonomous and automated driving for Volvo Trucks in Sweden, “but whether you want to do it is another thing.”

As the technology barrels forward, some anxiety is evident among regulators and consumers alike.

While a Consumer Technology Association poll found 70% of 2,001 people surveyed ready to test out an autonomous vehicle, a University of Michigan poll revealed less than 16% were willing to let the machines completely take over.

California, where many of the startups pursuing the technology call home, has been slow to adopt autonomous vehicle regulations, while Michigan, home to the auto industry, has shot ahead.

Headlines from last summer could stoke anxiety, too. The death of a man driving a Tesla Model S car in autopilot mode renewed concerns about the technology. After an investigation, U.S. regulators, however, found no evidence of defects. CEO Elon Musk, who operates a Tesla design center in Hawthorne as well as the SpaceX rocket-building facility, applauded the decision.

What needs to happen before these vehicles are fully deployed is a “mind-set change,” Volvo’s Hayder said. Motorists may fear sharing the road with “heavy, long big trucks” without drivers. But the long-range goal is to make robot-powered trucks safer than their human-steered counterparts.

“We have a huge opportunity,” said Marques McCammon, general manager for connected vehicle solutions at Wind River, a subsidiary of Intel that has been developing software for self-driving vehicles.

Smart vehicles, with more electronic eyes than humans, will have a greater ability to sense obstacles or other danger. New, “smarter” road systems that communicate with vehicles could “change the paradigm,” he said.

In 2015, 35,092 people died in car accidents, according to the National Highway Safety Transportation Administration. The agency estimates 94% of all accidents were caused by human error.

“Think about what this could mean for safety alone,” McCammon said.

Experts disagree about just how long it will take to get driverless big rigs on the road and just how human-free they will ever be.

Platooning, for example, is a long way from robots at the wheel.

Shladover estimates it could be decades.

“All the truck drivers are not going to lose their jobs,” he said, “and there are a lot of other crazy predictions floating around out there. A transportation system doesn’t change that quickly. It takes a long time for vehicle fleets to turn over.

RELATED: Economists may be underestimating how fast the robots are coming for your job

“Even when we got a government mandate that all new vehicles have to be equipped with seat belts, it took 11 years to get up to 90% of the vehicles [in compliance)]” he added.

But plenty of folks are more bullish.

The head of Connecticut-based transportation and logistics company XPO told maritime professionals at a conference in Long Beach in the week ended March 10 that he expects to see driver-free trucks “everywhere” in the next decade.

And Noel Perry, an economist specializing in freight, said he expects to see driverless trucks come online in 10 years and for platooning to be operational by 2020.

That could eliminate hundreds of thousands of jobs, with median pay about $40,000 for each, according to the Department of Labor.

That notion doesn’t sit well with Sam Loesche, a lobbyist for the Teamsters union, which represents about 40,000 truck and delivery drivers nationwide.

“You can never be in a situation where you automate jobs overnight and expect that to be the best interest of the country,” Loesche said. “I don’t think we have even seen technology that is proven and reliable.

“These drivers are the face of business,” he said. “They interact on a day-to-day basis with customers, and their relationship strengthens brands. I would say anyone who writes off the role of the working class in this country ... does so at their own risk.”

For Perry, the arrival of automated trucking is not a drama pitting jobs and families against a robotically enhanced bottom line. It’s simply where the business needs to be, he said.

“It will mean trucking is cheaper and safer,” he said.