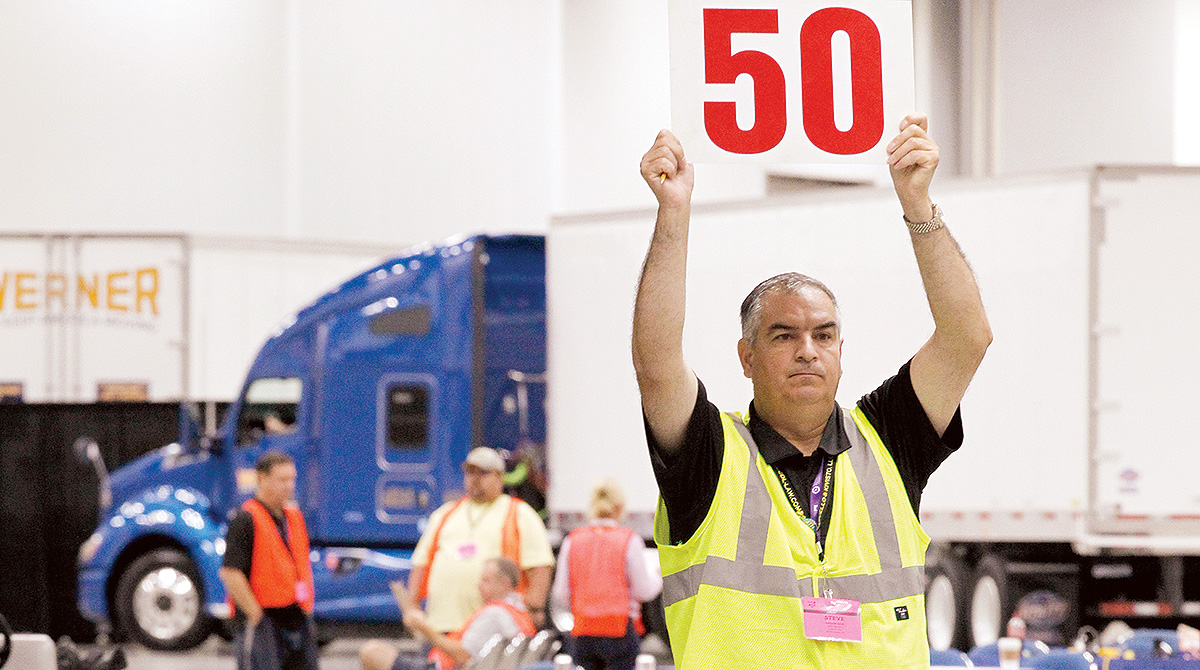 A judge gives his score at the competition during 2016 NTDC. (John Sommers II for Transport Topics)

The National Truck Driving Championships involves a considerable amount of fanfare, including a rousing breakfast, a parade of equipment and a celebratory awards ceremony..

However, there’s a less flashy (but no less important) aspect of NTDC that receives little attention: the scoring process. Transport Topics caught up with Patti Gillette, the NTDC Committee member in charge of scoring, to learn more about the different components of the competition and how they are evaluated. Gillette, who is also vice president of the Colorado Motor Carriers Association, has served as NTDC Committee chair in the past.

Drivers compete in three categories: a written test, a pre-trip inspection and a skills test. A perfect score — the highest a driver can earn for all three events — is 480 points. 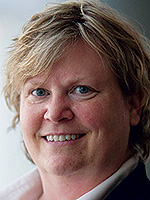 The written test has 40 questions, worth two points apiece. The highest score possible is 80 points.

The skills test challenges drivers with six obstacles, or “problems,” each of which are worth up to 50 points. Drivers can earn different point values based on how precisely they execute a problem. For example, a driver who stops his or her truck directly over a mark would score higher than a driver who stops an inch away from the mark. The highest possible score on the skills test is 300 points.

Finalists are selected based on total raw scores of written exams, pre-trip inspections and skills tests. There are eight classes represented in the finals: Straight Truck, 3-Axle, 4-Axle, 5-Axle, Sleeper Berth, Flatbed, Tank Truck and Twins. The top five drivers in each of these classes heads to the finals. The Step Van drivers compete in their own championships and are not considered in the Grand Champion formula.

The formula to determine the Grand Champion is a little more complicated than the selection process for finalists. 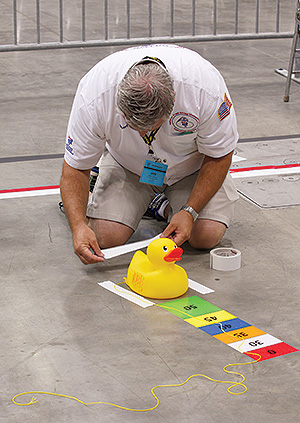 In order to determine Grand Champion, scorers rank, from high to low, the top drivers in each class based on five criteria:

The finalist’s rank in each of these five criteria is added together. The scorers repeat this process for all eight competing classes. The driver with the highest total score is named Grand Champion.

“We try to look at each event and make sure that each event within the TDC is taken seriously and given serious weight,” Gillette said. “That’s kind of the theory behind the math.”

Gillette said it’s hard to identify which portion of the competition is hardest for drivers. She said the written test probably feels the least natural because sitting behind a desk with a pen and paper is not something they do every day, unlike conducting pre-trip inspections or driving.

“It’s very individualized. I think they get very nervous,” Gillette said. “It’s kind of critical that drivers relax and enjoy themselves and just do what they do the other 364 days a year. They’re all very good at what they do.”