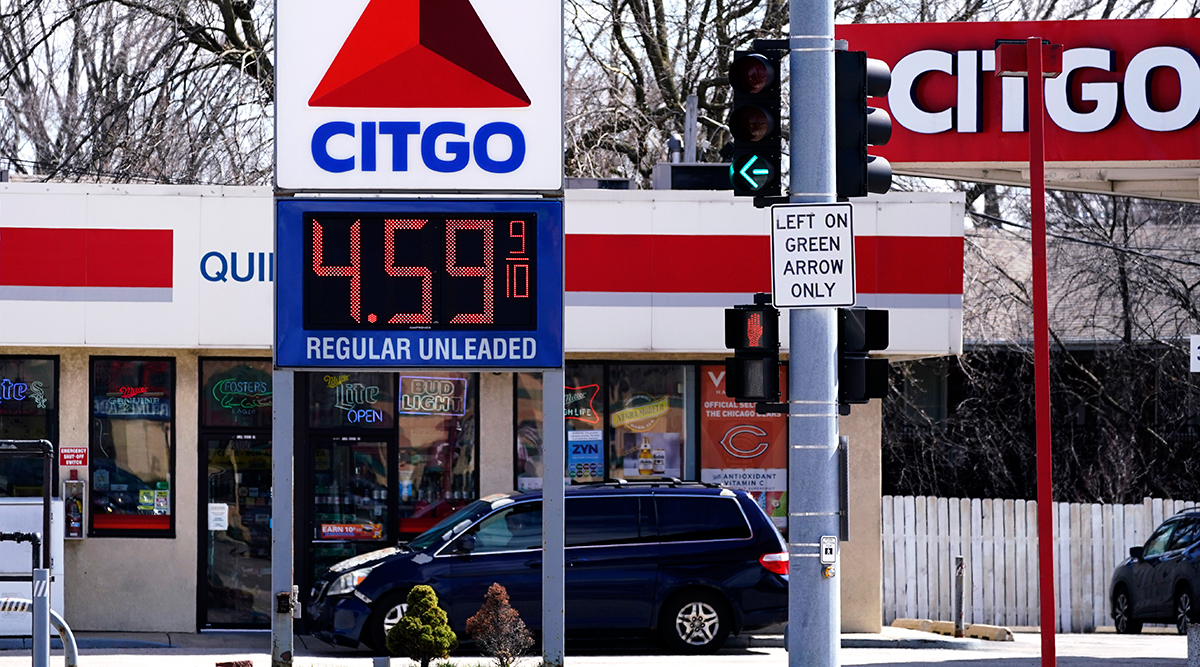 Congressional Democrats excoriated executives from some of the world’s biggest oil companies on April 6, accusing them of exploiting the war in Ukraine and a surge in crude prices to secure windfall profits at the expense of American motorists.

Oil companies are “ripping off the American people at a time of record profits” and “profiteering from our continued reliance on this volatile global commodity,” said Rep. Frank Pallone (D-N.J.), who heads the House Energy and Commerce Committee. The American people are suffering “as these companies choose to keep production low so that their own profits stay high,” he added.

The chief executives of six oil companies, including Exxon Mobil Corp., BP America Inc., Chevron Corp. and the U.S. division of Shell Plc, were grilled by a House energy investigations subcommittee amid intensifying scrutiny of profits that have climbed along with the price of crude and gasoline. Polls show high pump prices and inflation are wearing on voters ahead of the November midterm elections, potentially jeopardizing Democrats’ control of one or both chambers of Congress.

Oil bosses defended efforts to steer profits to shareholders now, after weathering the COVID pandemic that decimated fuel demand and drove huge losses. They blamed uncertain regulations and federal policy for chilling investment, saying more pipelines, permits and leases are needed to encourage production. And they took pains to emphasize plans for boosting U.S. output, by sinking more money into domestic projects and bringing on more rigs, though some of the increases are designed to offset declines elsewhere. 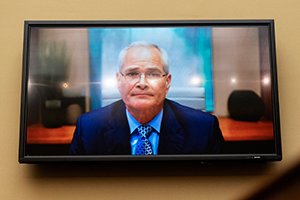 The average cost of a gallon of unleaded gasoline is $4.16, according to the latest data from auto club AAA. That’s up 18% since the day before Vladimir Putin’s tanks rolled into Ukraine and 45% higher than a year ago — but down almost 4% from the record $4.33 reached last month.

Rep. Diana DeGette (D-Colo.) highlighted the disconnect between the price of retail gasoline and oil, despite recent declines. The price of oil has come down, she said, “but the price at the pump is still near record highs.”

There is generally a lag between movements in crude oil and pump prices as it takes time for costs to filter through the supply chain to gas stations. And pump prices typically respond much faster to climbing crude costs. 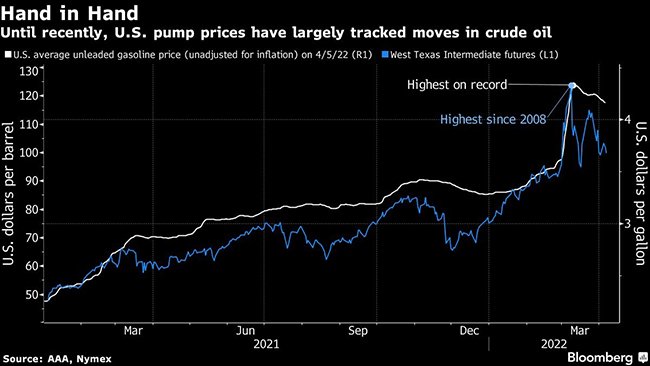 “Oil and product prices are correlated over time,” with retail prices potentially reflecting costs paid a week or two earlier, said Mike Wirth, chief executive of Chevron. “These things do correlate over the long term, but in the short term, they don’t always move in tandem.”

Democrats and Republicans jockeyed over who was most responsible for high fuel prices. “Some of our witnesses today have stated publicly that their focus is not on helping American families or on fueling America’s economy — it’s enriching their shareholders,” said DeGette, who heads the subcommittee holding the hearing.

But Rep. Morgan Griffith (R-Va.) said Democrats were deflecting blame that should be heaped on President Joe Biden for “his relentless pursuit of policies that discourage domestic energy production.” Early administration policies, including a pause on the sale of new federal drilling rights, signaled a desire to restrict domestic oil production that has sapped enthusiasm for new investment, he said.

Exxon on April 4 signaled its highest profit in 13 years, with first-quarter results expected to reach almost $11 billion, helping fuel Democrats’ accusations. Exxon, Chevron Corp., BP Plc and Shell spent $44 billion on stock buybacks and dividends last year and have promised $32 billion to investors this year, House Democrats said in a letter asking oil companies to suspend stock buybacks and dividends for the duration of the war in Ukraine.

Rep. Lori Trahan (D-Mass.) accused executives of “profiting personally” from stock sales after Russia’s invasion of Ukraine, which stoked uncertainty about crude supplies and helped drive the price spike. “At least five top oil executives have cashed out some $99 million worth of stock personally since the invasion began,” she said, before singling out Scott Sheffield, chief executive of Pioneer Natural Resources Co., for selling shares.

Sheffield responded that the transaction represented his first sale of Pioneer stock in several years and came when share prices were “only up about 8 to 9% since the invasion.”

Exxon’s Woods stressed that the industry weathered a steep drop in crude prices — which briefly went negative — after the pandemic caused demand to plummet. “Our industry sustained huge losses to the point many went out of business and cut back on their investments,” he said. “This reduction in investment laid the foundation for our current market and supply challenges.”

And Sheffield told lawmakers that past overspending in shale production, which drove down prices, was unsustainable, leading to hundreds of bankruptcies. “The industry’s returns were dismal,” he said. “It became abundantly clear that for the industry to survive, the model of production growth at any cost needed to change.”

Those explanations did not sit well with Rep. Ann Kuster (D-N.H.), who admonished the executives not to “use 2020 as an excuse for gouging the American people today.”

“We understand you did lose money during the pandemic,” she said. “Most Americans did.”

— By Jennifer A. Dlouhy, Ari Natter and Kevin Crowley. With assistance from David Wethe.