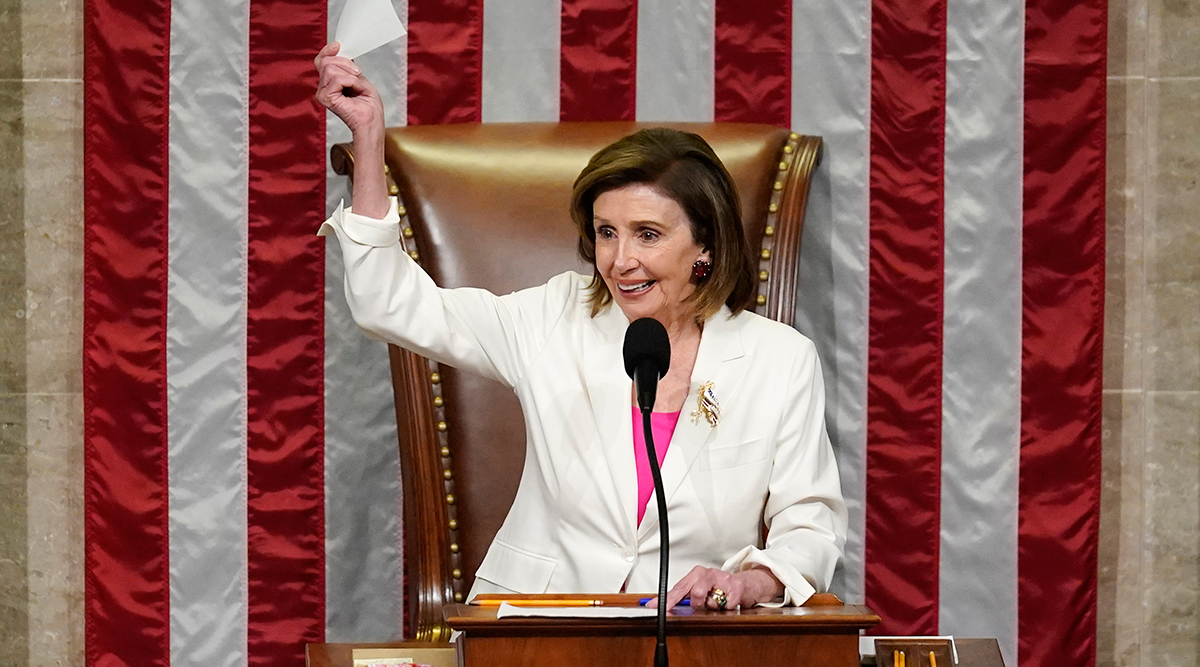 Speaker of the House Nancy Pelosi presides over passage of the Democrats’ Sweeping Social, Climate bill.

WASHINGTON — A fractious House handed President Joe Biden a marquee victory Nov. 19 by approving a roughly $2 trillion social and environment bill, as Democrats cast aside disputes that for months had stalled the measure and hampered efforts to sell their priorities to voters.

Lawmakers approved the legislation 220-213 as every Democrat but one backed it, overcoming unanimous Republican opposition. The measure now heads to the Senate, where changes are certain and disputes between cost-conscious Democratic moderates and progressives who seek bold policy changes will flare anew.

The bill paves the way for the adoption of alternative fuel technology and severe weather resilience for mobility corridors and structures, such as bridges and tunnels.

For the moment, Democrats were happy to shake off a dispiriting period of off-year election setbacks, tumbling Biden poll numbers and public disgruntlement over inflation, stalled supply chains and the pandemic. All that and the party’s nasty internal bickering have left voters with little idea of how the legislation might help them, polls have shown.

“Above all, it puts us on the path to build our economy back better than before by rebuilding the backbone of America: working people and the middle class,” Biden said in a statement.

He told reporters at the White House he expected the legislation to “take awhile” to move through the Senate but declared, “I will sign it. Period.”

The legislation, among the most expensive in years, is remarkable for its reach. It rewrites tax, health care, environment, education, housing and other policies, shoring up low- and middle-income families, helping the elderly and combating climate change.

Most of it would be paid for with tax boosts on the country’s highest earners, biggest corporations and companies doing business abroad. That includes new surtaxes on people earning over $10 million annually and a corporate minimum tax.

Because of its size, scope and status as a symbol of what Democrats stand for, each party thinks the package will help in next year’s midterm elections, when Republicans have a solid chance at capturing House and Senate control.

Democrats see the 2,100-page legislation as overdue and long-lasting help for a vast swath of the nation. 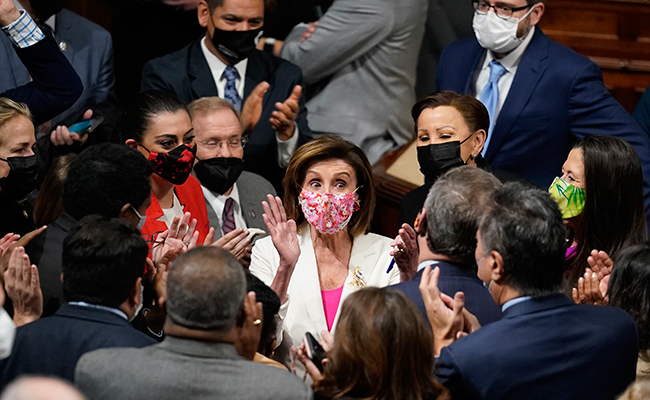 “[The bill] will be the pillar of health and financial security in America,” said House Speaker Nancy Pelosi (D-Calif.). “If you are a parent, a senior, a child, a worker, if you are an American, this bill is for you.”

“Build Back Better,” chanted Democrats, embracing and jumping with glee at the front of the chamber as the roll call wound down. That’s the name Biden has given the bill — a companion piece to his other domestic priority, the bipartisan $1 trillion package of broadband, road and other infrastructure projects he signed into law this week.

In Congress’ latest dose of partisan bitterness, House Minority Leader Kevin McCarthy (R-Calif.), had delayed the latest bill’s expected approval on Nov. 17 when he unleashed an eight-hour, 32-minute diatribe against the legislation, the president and Democrats.

McCarthy glared as Democrats booed and groaned during what became the longest speech in House history, remarks that included personal insults aimed at Pelosi. As minority leader in 2018, she held the previous record, speaking for eight hours and seven minutes about immigration. 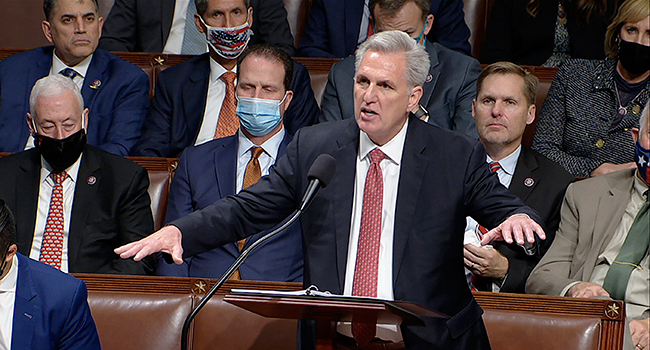 Most of the bill’s costs come from mountains of new spending, though there also are hundreds of billions in tax credits for encouraging certain goals.

People, and the government, too, would save money from new curbs on prescription drug prices, though the provisions are modest compared with tougher requirements most Democrats preferred. There would be extended tax credits for families with children, for some low-earning workers and for people purchasing private health coverage.

In language that helped win support from lawmakers from high-cost coastal states, the bill would increase federal deductions people can take for state and local taxes. The provision, which would largely benefit affluent earners, would cost above $220 billion over the next five years, making it one of the legislation’s costliest programs.

The measure also would finance a new requirement for four weeks of paid family leave and create temporary work permits so millions of immigrants could remain in the U.S. up to a decade. Both face an uncertain fate in the Senate.

That chamber’s 50-50 split plus solid GOP opposition gives every Democrat veto power. Sen. Joe Manchin (D-W.Va.), who helped slash the bill’s 10-year cost from its earlier $3.5 trillion, has opposed the family leave provision. And the Senate parliamentarian enforces rules that make it hard to include policy-heavy provisions such as major immigration law changes.

The bill would worsen projected budget deficits, already huge, by $160 billion over the coming decade, the nonpartisan Congressional Budget Office estimated. That would be higher except for $207 billion in projected extra tax collections by bolstering IRS spending for audits, largely of the rich.

Both parties worry about deficits selectively. Republicans passed tax cuts in 2017 that worsened red ink by $1.9 trillion, while Democrats enacted a COVID-19 relief bill this year with that same price tag.

Rep. Jared Golden of Maine, one of Congress’ more conservative Democrats, was the only no vote from his party.

The Committee for a Responsible Federal Budget, a nonpartisan organization favoring fiscal constraint, estimated the bill would cost nearly $5 trillion if Democrats hadn’t made some provisions temporary to be more affordable. For instance, tax credits for children are extended for just one year, even though Democrats would make them permanent if they could.