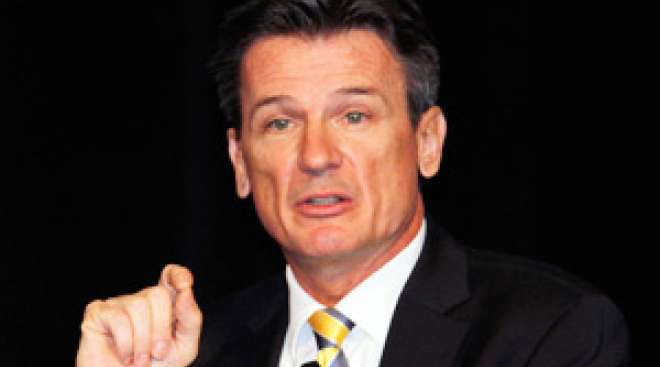 John Sommers II for Transport Topics
Daimler AG’s trucks division, seeking to recover from a profit warning last month, aims to boost future earnings with a plan to cut costs by sharing more engines, axles and other components across units in North America, Europe and Asia.

Once truck markets return to “a more normal level,” the unit will reach its target of an average 8% return on sales, Wolfgang Bernhard, head of Daimler’s commercial-vehicle business, said at a press conference June 8 in Stuttgart, Germany. A key to boosting profit will be using more vehicle parts worldwide and improve efficiency, he said.

“We’ve initiated the right measures to balance short-term swings and reach our long-term goals,” Bernhard said. “We’re not talking about 10 or 15 years; we want to get these things done by the end of this decade, and this will put us in a unique position.”

The world’s largest maker of commercial vehicles is seeking to stabilize earnings in the face of fierce price pressure in Europe and intensifying competition, including from Chinese rivals in emerging markets. Declining demand in the U.S. and contracting markets in Brazil, Russia and Indonesia prompted Daimler last month to forecast “significantly lower” 2016 profit at the unit. To better offset such swings, the German manufacturer, which also makes Mercedes-Benz luxury cars, has embarked on an unprecedented push to share truck parts across more vehicles and markets.

The division’s Mercedes-Benz trucks brand plans 2,000 job cuts in Brazil, and its North American operations, which include the Freightliner and Western Star nameplates, are laying off a similar number of workers. Daimler is sticking to a target of selling 700,000 trucks a year by 2020 even as global markets are set to remain difficult this year and weigh on profitability, Bernhard said.

“With truck earnings down and the product story at Mercedes arguably past peak, we remain on the sidelines,” Arndt Ellinghorst, a London-based analyst at Evercore ISI, said in a report to clients. He estimates full-year profit at Daimler Trucks to drop about 18% to 2.26 billion euros ($2.57 billion).

Unlike passenger cars, heavy-duty vehicles vary significantly from region to region. The geographical differences and lower volumes in the truck market have limited manufacturers’ investments in common engines, transmissions and other components. Daimler is seeking to buck that trend. Bernhard outlined plans for a single electronics system in Daimler’s trucks worldwide and a single dashboard that can be installed with different exterior designs for each brand.

The goal is to rein in costs and win over customers by accelerating the introduction of new technology, including logistics-data services and operating-efficiency gains. Fuel consumption ranks as one of the top criteria when truck buyers choose a model, along with vehicle reliability and maintenance terms.

Daimler Trucks “hasn’t proved yet that it can match the level” of profitability of Paccar Inc. or Volkswagen AG’s Scania, Oliver Maslowski, a Zurich-based fund manager at GAM, said in an interview this week. “The profit warning raises the question if they misread the truck cycle in North America and were too late to scale down production.” The Daimler unit’s operating-profit margin was 7.3% of revenue from ongoing business in 2015.

Bernhard said that, while Scania’s ahead of Daimler Trucks in profitability, “we’re making progress.” The Swedish competitor “is only present in the heavy-duty segment, which is more lucrative in terms of margins than the mid-duty segment.”

The Mercedes-Benz trucks unit is revamping its production network to become leaner and improve margins, said Stefan Buchner, the head of the brand. The business will scale back vehicle variants 35% by 2018 and cut production hours 25%, while it will “tackle material costs aggressively, performing better than target.”