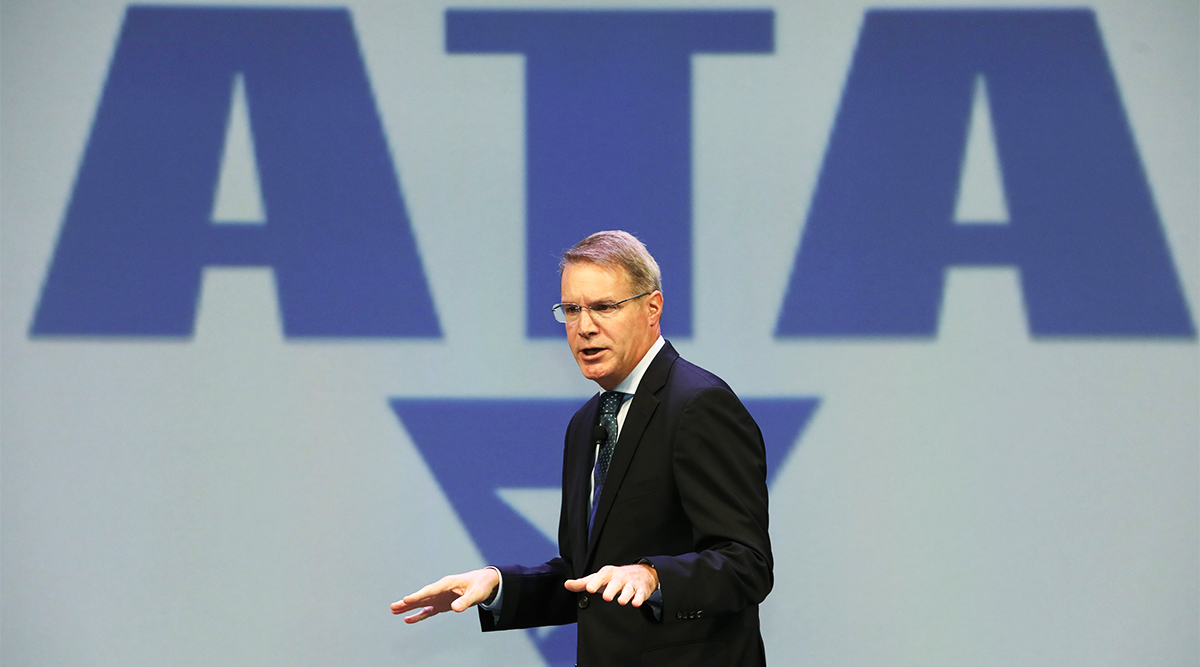 The subcommittee, which will consist of ATA members, will serve as a policy group to help lawmakers, regulators and courts make decisions related to legalized recreational marijuana’s impact on safety and interstate commerce. He said such decisions involve hair follicle testing and technology to detect roadside impairment from marijuana.

The group, co-chaired by Harold Sumerford, CEO of J&M Tank Lines; and Paul Enos, CEO of the Nevada Trucking Association, met for the first time on Oct. 5 at MCE.

While delivering his annual state of the industry address, Spear said variation between state and federal laws regarding recreational marijuana use presents a gray area in which trial lawyers can thrive.

“You can just see the trial lawyers, sitting on the edge of their high, wing-back leather chairs, drooling over the thought of more legal ambiguity,” Spear said. “We can’t just sit back and hand them yet another opportunity to litigate our industry.”

He also expressed frustration with “nuclear” verdicts against the industry, and identified tort reform as a leading priority for the next year.

Spear referred to one incident in which a pickup truck crossed a median on a Texas interstate and hit a tractor-trailer traveling in the opposite direction. Although the truck driver, a student traveling with an instructor, was not cited by police, the family argued the driver should have pulled over because weather conditions were poor. A jury awarded the pickup truck driver’s family $90 million.

ATA leaders have visited the White House, met with federal government officials and testified before Congressional representatives. In June, Spear appeared before the House Transportation and Infrastructure Committee to push for a funding plan for the nation’s infrastructure system.

Although Spear acknowledged that some people have suggested ATA has gotten “cozy” with the administration, he told listeners that ATA’s cooperation has extended across the political aisle. For example, Speaker of the House Nancy Pelosi (D-Calif.) invited ATA to present at the House majority retreat earlier this year. Spear said this was the first time ATA had received an invite to this event.

“The right wing and left wing belong to the same bird,” Spear said. “As an association that puts its members, industry and country first, we must always adhere to the value of working with anyone willing to work with us. We do that, and we soar.”

While the trucking industry has been strong for the past couple of years, Spear noted that several major issues still need to be addressed. He mentioned the country’s snarled infrastructure, which costs fleets time and money and harms the environment. American Transportation Research Institute says the industry loses $74.5 billion a year sitting in traffic.

ATA supports the Build America Fund to improve infrastructure. The Build America Fund would be backed by a 20-cent-per-gallon fee incorporated into the price of transportation fuels gathered at the terminal rack at an incremental 5 cents per year over four years. This fee would be indexed to inflation as well as improvements in fuel efficiency with a 5% annual cap. During its first decade, Spear said, the program would be capable of generating about $340 billion.

“It’s the most conservative, efficient and equitable solution and the most difficult to evade,” Spear said. “It’s immediate. And it’s time for Congress to do the job we hired them to do: vote. I am absolutely convinced the votes are there to fund America’s infrastructure. And for those in Congress unwilling to get the job done, we need to help facilitate their immediate retirement.”

Other goals include getting Congress to approve the United States-Mexico-Canada Agreement and developing the workforce to redress the industrywide driver shortage, which once again topped ATRI’s list of industry issues. ATA published a report indicating the industry was short 60,000 drivers last year. Spear identified young people, veterans, women and minorities as groups of people who can offset the driver shortage.

“Poaching talent from other carriers is not a sustainable growth strategy,” Spear said. “Ignoring the facts is also not an option. This problem is real, the solution is not one thing, but many things. We need to elevate the next generation of workers.”