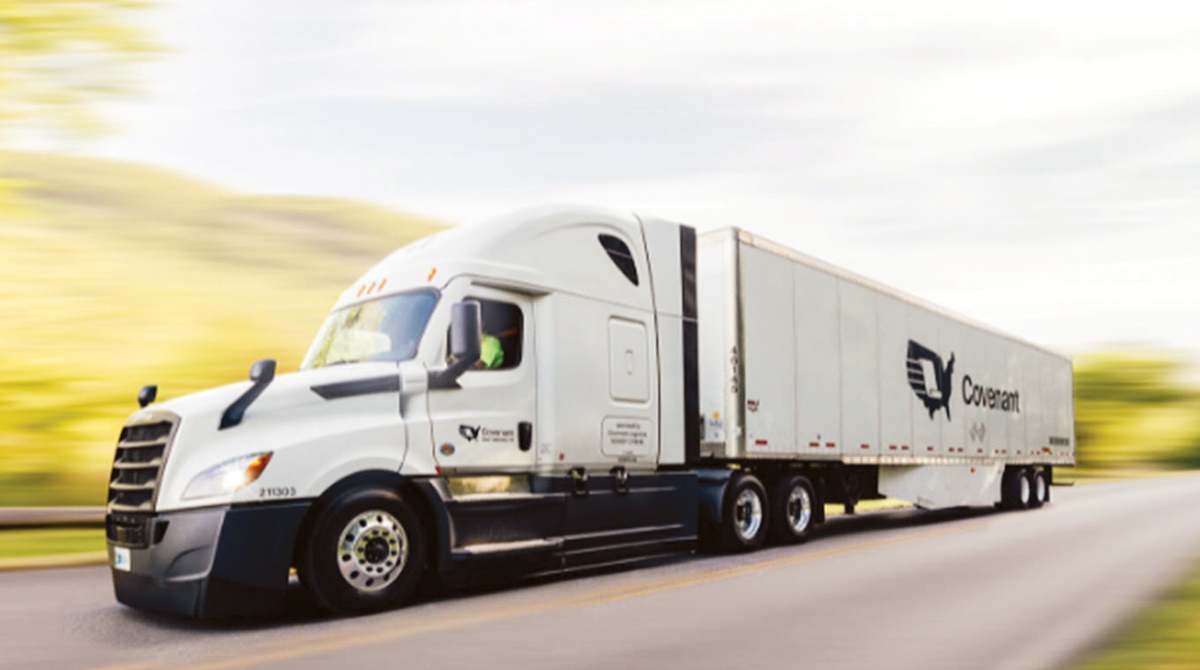 The Chattanooga, Tenn.-based truckload carrier posted net income of $22.2 million, or $1.32 a diluted share, for the three months ending March 31. That compared with $11.1 million, or 65 cents a share, during the same time the previous year.

“The first quarter yielded strong results from each of our four operating segments, including sequential improvement in our dedicated truckload segment,” Covenant CEO David Parker said in a statement. “Despite economic indicators pointing to a slowing freight economy, the first quarter’s freight environment remained robust as a result of strong economic activity, low inventories and supply chain disruptions, accompanied by constrained capacity due to a national driver and equipment shortage.”

The results were above expectations by investment analysts on Wall Street, who had been looking for 86 cents per share and quarterly revenue of $276.6 million, according to Zacks Consensus Estimate.

“Our asset-based segments, expedited and dedicated, contributed approximately 64% of total revenue in the quarter and performed well in an environment characterized by strong freight demand, an extremely competitive driver market, workforce volatility due to the resurgence of the COVID-19 pandemic through the omicron variants early in the quarter and rising costs,” Parker said. “Our expedited segment grew revenue and improved adjusted margins compared to the first quarter last year.”

Covenant repurchased approximately 655,000 shares of outstanding common stock and initiated the payment of its dividend payment during the quarter. The company then purchased an additional 429,000 shares of outstanding common stock through April 26. AAT Carriers Inc. was acquired by the company Feb. 9. “The addition of AAT and improved pricing were able to overcome a smaller fleet, and significant cost increases from driver pay, fuel, parts and maintenance,” Parker said. “Our dedicated segment improved year-over-year and sequentially by producing higher revenue and better adjusted margins, continued progress towards our targeted returns.”

The expedited segment reported that revenue in the first quarter increased 16.4% to $98.8 million from $78.5 million during the same time last year. Operating income increased 49.6% to $9.33 million from $6.24 million last year. The average total tractors decreased by 1.9% to 869 from 886 in the prior year quarter. But the average freight revenue per tractor increased 18.7% due to an increase of 36 cents per total mile in average freight revenue. This was offset by a slight decrease in utilization.

Dedicated saw revenue increase 13.6% to $88.9 million from $75.4 million the prior year. The operating income in the segment increased to $2.64 million from an operating loss of $1.77 million. The average dedicated tractors decreased by 12.3% to 1,433 from 1,634 last year. But the average freight revenue per tractor grew by 29.5% due to an increase in average freight revenue per total mile of 29.1% and a slight increase in utilization.

The managed freight segment saw revenue increase 67.6% to $86.2 million from $51.4 million last year. Operating income increased 121% to $10.8 million from $4.89 million. The results for the quarter were primarily attributable to the robust freight market, executing various spot rate opportunities and handling overflow freight from both expedited and dedicated truckload operations.

The warehousing segment reported that revenue increased 13% to $17.4 million from $15.4 million the prior year. Operating income decreased 9.6% to $1.04 million from $1.16 million. The increase in revenue was primarily driven by the year-over-year impact of new customer business and rate increases with existing customers. The decline in profitability was largely attributable to higher contract labor costs associated with the resurgences and variant developments in the coronavirus pandemic and the tight labor market.

Covenant Transport Services ranks No. 46 on the Transport Topics Top 100 list of the largest for-hire carriers in North America.