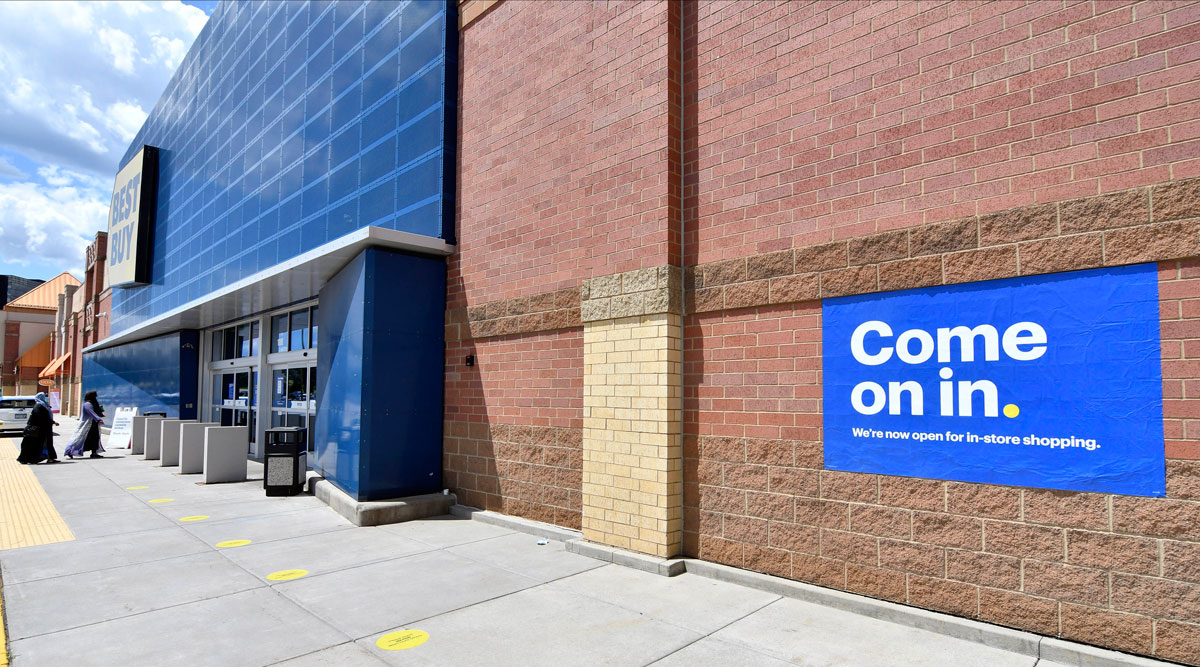 Shoppers, left, head to the entrance of a Best Buy store in Minnesota on June 24. (Jim Mone/Associated Press)

WASHINGTON — American consumers increased their spending by a record 8.2% in May, partly erasing record plunges the previous two months, against the backdrop of an economy that’s likely shrinking by its steepest pace on record this quarter.

Last month’s rebound in consumer spending followed spending drops of 6.6% in March and 12.6% in April, when the viral pandemic shuttered businesses, forced millions of layoffs and sent the economy into a recession. Since then, many businesses have reopened, drawing consumers back into shops and restaurants and restoring some lost jobs.

The June 26 Commerce Department report showed that Americans stepped up their spending in May despite a 4.2% decline in personal income, which had soared by 10.8% the previous month. Income had jumped in April on the strength of billions of dollars in support through government payments in the form of unemployment aid as well as one-time $1,200 stimulus checks. In May, those stimulus checks were no longer counted as income for most people.

Besides whatever unemployment aid states are providing to the 30 million jobless Americans, the federal government is providing $600 a week in additional benefits. The federal money has pumped nearly $20 billion a week into the economy and enabled many of the unemployed to stay afloat. But the $600-a-week in aid will expire after July, and Trump administration officials have said they oppose an extension.

Without the stimulus checks or an extension of unemployment aid, it’s unclear whether consumers will keep spending freely. In testimony to Congress last week, Federal Reserve Chairman Jerome Powell said he thought lawmakers should consider providing some form of extended unemployment benefits beyond their typical six-month period, on the assumption that joblessness will likely still be quite high by year’s end. 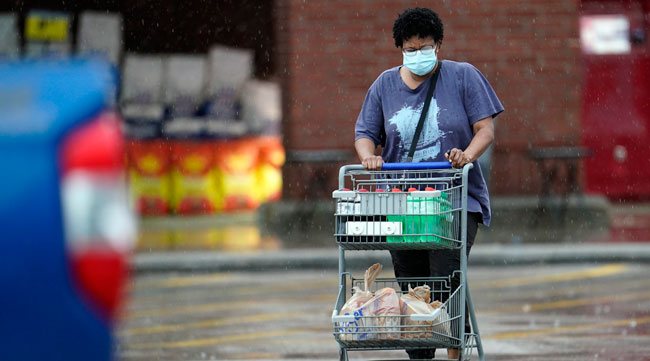 A shopper wears a mask while pushing a grocery cart in Houston on June 25. (David J. Phillip/Associated Press)

Last month’s rise in consumer spending also coincides with a sudden surge in coronavirus cases that’s forcing states and businesses to consider scaling back or even reversing the reopenings. If an escalation of the pandemic does force another round of widespread business shutdowns, fewer people would shop, travel, eat out or attend large events. That would reverse any rebound in spending and would further weaken the economy.

Consumer spending is closely watched because it accounts for about 70% of economic activity. Despite the increased spending in May, economists have estimated that the economy, as measured by the gross domestic product, is contracting at a roughly 30% annual rate in the April-June quarter after shrinking at a 5% rate in the January-March period. That would be, by far, the worst U.S. quarterly contraction since record-keeping began in 1948.

Economists cautioned against reading much into last month’s surge in consumer spending. They noted that the increase followed two record declines and that it still left spending 11% below its pace before the pandemic hit.

“Amid rapidly rising infections across many states, risks to the outlook are dangerously tilted to the downside,” Gregory Daco, chief U.S. economist at Oxford Economics, said in a research note.

The June 26 report showed that among the categories for which consumers ramped up spending in May, the sharpest increase — a 29% jump — was for durable goods such as autos. Spending on a category called nondurable goods, which includes food and clothing, rose nearly 8%. And spending on services — everything from cellphone contracts to hospital visits — rose more than 5%.

Inflation, as measured by a gauge tied to consumer spending, edged up a scant 0.1% in May, the report showed. Inflation over the past year is just 0.5%, far below the Fed’s annual 2% target.

In February, the economy fell into a deep recession, according to the National Bureau of Economic Research, the association of economists that is the official arbiter of recessions in the United States. Most analysts expect the economy to rebound in the second half of this year before potentially regaining its pre-pandemic level in late 2021 at the earliest.

The Trump administration is predicting a relatively fast and robust economic rebound starting this summer. Most private economists are far less optimistic. And they warn that if the pandemic intensifies and forces a second round of business closures, it would set the job market and the economy even further back. The damage could be dire.

One hopeful sign, in the meantime, comes from data compiled from Chase Bank credit and debit cards. It shows that consumers have gradually but consistently increased their spending since the government distributed the stimulus checks in mid-April.