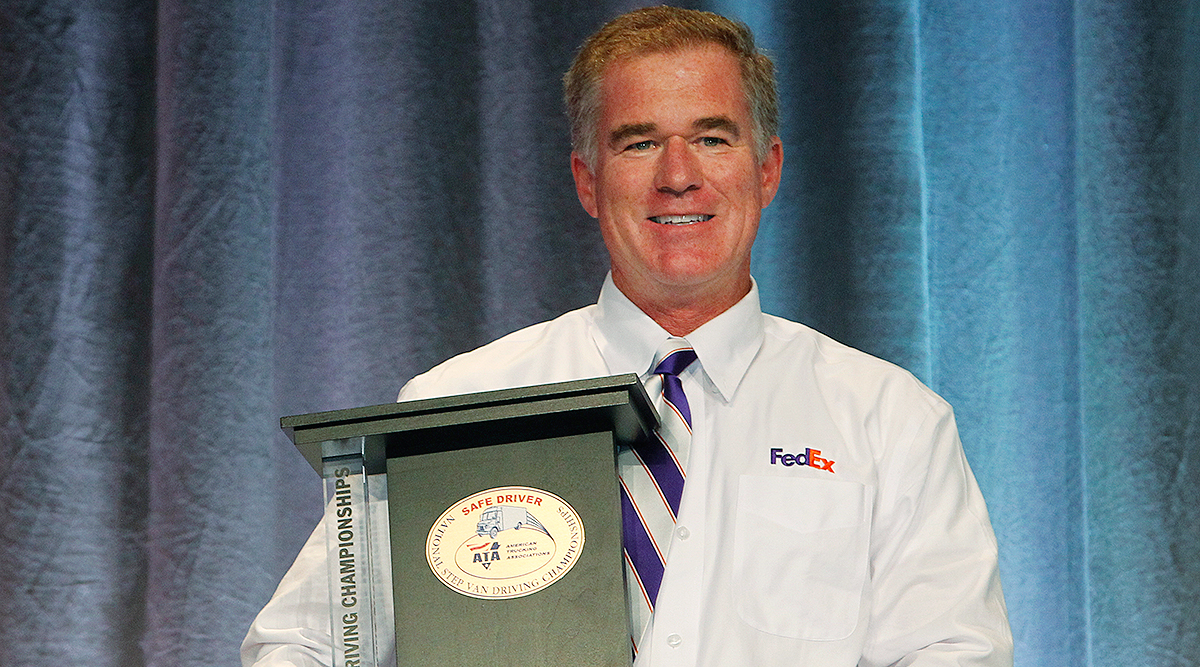 The competition, held in tandem with the National Truck Driving Championships, culminated with an awards banquet that included all 424 drivers who participated in the championships, plus 52 commercial vehicle inspectors, family members and volunteers.

PARADE OF TITLEISTS: The Champions of NTDC 2018

Damon, based in Colorado, said he felt “numb” upon receiving the award. He’s been driving with FedEx for 22 years, and this marks his third appearance at NTDC.

Who: Winners from nine categories at the state level have advanced to the national competition, where a grand champion will be crowned

Earlier that day, finalists in the truck driving competition maneuvered through a course that included six challenges, or “problems.” The challenges laid out on the finals course include weaving through a series of plastic pillars, completing a rear stop with the bumper square over a scored zone, executing a turn without touching a plastic pillar and maneuvering through a channel of tennis balls and tape.

The most difficult part of the competition for Damon was not the course, however. He said the hardest part was maintaining a safe duty record, which drivers need to qualify for the competition. Drivers who qualified for NTDC also placed first in their class at their state championships.

“Safety is the hardest part. Driving safe for a year is what it’s all about,” said Damon. “It’s our focus every day. That’s what gets you here first.”

Damon was joined at the competition by his sister, who traveled to the event from New Hampshire. He credited her as one of his greatest supporters. When he’s not driving, Damon said he enjoys being outdoors and spending time with his children, Bryan and Shannon, whom he also named as his “two greatest supporters.”

In addition to the final challenge course, Damon also completed a written exam and a preliminary problem course Aug. 17.

Massachusetts’s Robert Ledoux of FedEx Express won placed second in the step van category, and Virginia’s Gregory Long, also of FedEx Express, placed third. This was Ledoux’s sixth time competing at NTDC, and the fourth time he’s made it to the finals. The best he has performed, before Aug. 18, was earning third place in 2011. He was joined by his wife at the ceremony.

And we're off! Step van is first on the finals course. #NTDC2018 pic.twitter.com/xc0i6sqkRj

“I’m in awe. I never expected to be called out,” Ledoux said. “I thought I was on the bubble. I’m in shock.”

Other finalists in the category were FedEx Ground’s Grant Garwood of Missouri and J.B. Hunt’s Samuel Brooks of Arkansas.