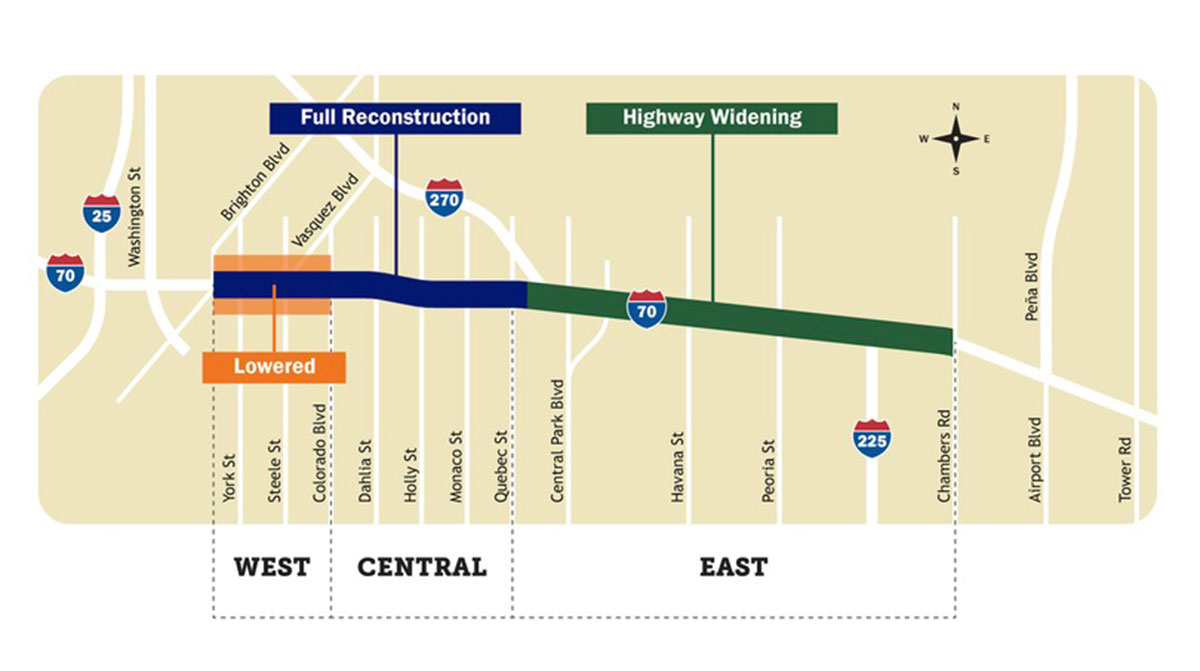 A highway project vital to the flow of freight and commuters in Colorado will receive additional federal backing, the U.S. Department of Transportation announced recently.

Kiewit Meridiam Partners was provided a direct TIFIA loan of up to $464.9 million to finalize the construction project. The firm is tasked with helping to realize myriad benefits associated with the corridor, such as reductions in travel time and enhanced safety conditions.

The Central 70 Project aims to expand access along the corridor with the addition of three general-purpose lanes and a managed lane in each direction, USDOT explained. Additionally, a 4-acre park set to be built above an area of the highway is meant to reconnect minority neighborhoods that had been divided by construction of a viaduct in 1960. The project is scheduled to be completed in 2023.

According to the state’s Department of Transportation, Central 70, between Interstate 25 and Chambers Road, is home to about 1,200 businesses and provides the region with connection to Denver International Airport. It also accommodates approximately 200,000 vehicles daily.

According to the state agency, “Central 70 Project will add one express lane in each direction, restripe between I-25 and Brighton Boulevard, reconstruct I-70 between Brighton Boulevard and I-270, widen between I-270 and Chambers Road, remove the 57-year-old viaduct and lower the interstate, [and] construct a new 4-acre park over the interstate to reconnect the communities.”

Besides TIFIA (Transportation Infrastructure Finance and Innovation Act), federal officials noted the project is backed via proceeds of tax-exempt private activity bond and taxable bond issuances, as well as contributions from the state DOT, the Colorado Bridge and Tunnel Enterprise, the High Performance Transportation Enterprise, and local and state entities.

The new TIFIA loan updates a $416 million TIFIA loan via USDOT’s Build America Bureau that was provided to project managers in 2017. Over the years, the state’s overall infrastructure has been marked by massive upgrades around the airport in Denver, and improvements to key commercial corridors. Projects resulting in upgrades to mobility access and truck connectivity have led to improvements with the flow of freight.

Separately, USDOT’s Build America Bureau recently marked its fifth year operating to facilitate access to financial programs and technical assistance to state agencies. Since it was established, the department noted the bureau has closed more than 50 loans worth about $20 billion.

“The bureau was created under the Obama administration with a simple goal: creating a simplified, one-stop shop for cities and states and transportation agencies trying to find innovative financing for infrastructure projects,” Deputy Transportation Secretary Polly Trottenberg said Sept. 23. “As we stand on the precipice of passing a major transportation bill, the mission of the Build America Bureau has never been more important.”

USDOT maintains it has closed $35 billion in TIFIA financings, which have assisted with about $122 billion in investments nationwide.