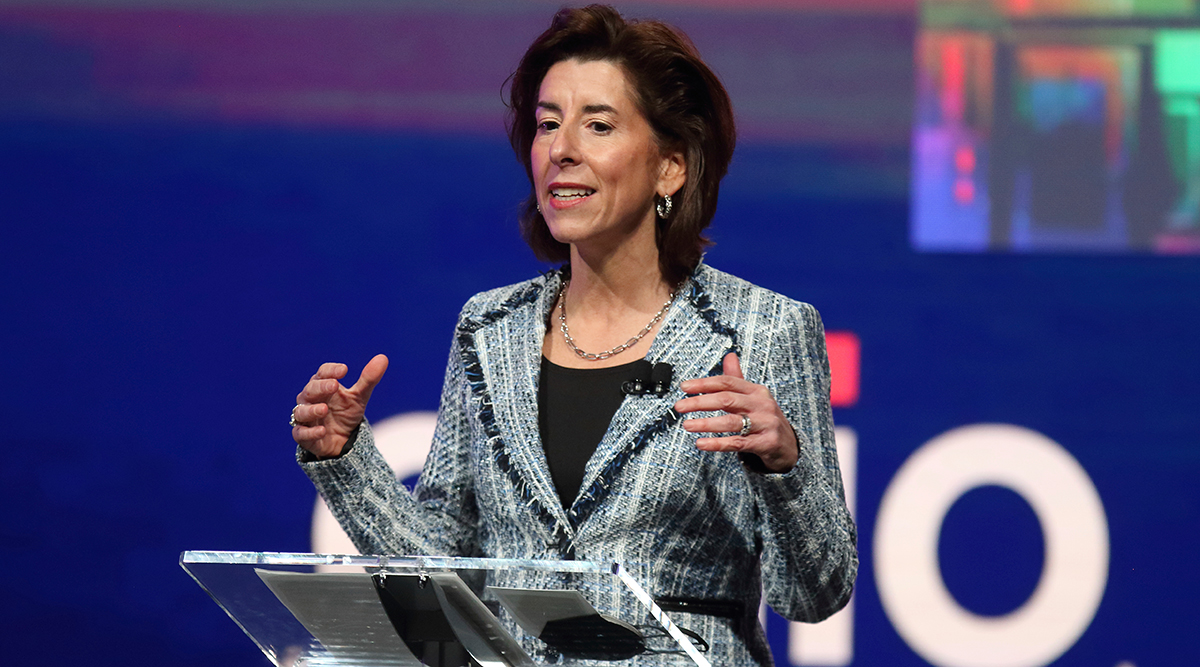 Secretary of Commerce Gina Raimondo speaks during the Jan. 21 announcement that Intel will invest $20 billion to build two computer chip factories on a 1,000-acre site in Ohio. (Paul Vernon/Associated Press)

The Biden administration has concluded that a global semiconductor shortage will persist until at least the second half of this year, promising long-term strain on a range of U.S. businesses, including automakers and the consumer electronics industry.

“We aren’t even close to being out of the woods as it relates to the supply problems with semiconductors,” Raimondo said in a briefing with reporters discussing the findings of an industry report her agency conducted that was released Jan. 25.

The report, based on information from more than 150 companies in the chip supply chain, shows “there is a significant, persistent mismatch in supply and demand for chips.” The companies “did not see the problem going away in the next six months,” according to the report.

“The semiconductor supply chain remains fragile,” the report said, despite months of work by the Biden administration to try to relieve shortages. “Demand continues to far outstrip supply.”

Median inventory has fallen from 40 days to fewer than 5 days, Raimondo said, adding, “That, to me, is the data point that tells you how fragile this supply chain is: five days of inventory, no room for error.”

The Commerce report highlights the limited options available to the Biden administration as it tries to respond to the crisis, which has caused production delays for electronic devices and furloughs in the auto industry. The chip shortage is also a key driver of higher inflation, which has bedeviled President Joe Biden’s White House and threatens to help swing Congress to Republican control in November’s midterm elections.

Most industry executives have cautioned that the shortage won’t ease until the second half of this year, with some products continuing to be delayed by the scarcity of parts into 2023. While the industry may never be able to escape its roller-coaster nature, the current demand boom may last until 2025.

The shortage is particularly impacting the medical device, broadband and auto industries, according to the report. U.S. officials plan to immediately focus on resolving bottlenecks in those supply chains, the report said.

The administration also will investigate potential price gouging for certain types of semiconductors that have seen “unusually high prices” during the supply crunch, according to the Commerce report. But the report didn’t specify which kinds of chips or which manufacturers are suspected of gouging.

The Biden administration demanded last year that companies in the semiconductor supply chain provide information about supplies and demand for chips to help identify bottlenecks. Suppliers and consumers of chips have at times accused each other of impropriety and obfuscation in their transactions.

The report found that median demand for chips was as much as 17% higher in 2021 than 2019, without commensurate increases in supply.

It also found the median inventory of semiconductor products that has fallen from 40 days in 2019 to less than 5 days in 2021 is even less in key industries. Any disruption for overseas manufacturers, such as a COVID outbreak or weather-related incident, could lead to production shutdowns and furloughs in the U.S.

The Commerce Department report all but concedes that the government is powerless to resolve the bottlenecks.

“The private sector is best positioned to address the near-term challenge posed by the current shortage, via increased production, supply chain management to minimize disruption, and product design to optimize the use of semiconductors,” it says.

But Raimondo said the report underscores the need for more investment in domestic manufacturing. Legislation making its way slowly through Congress would dedicate $52 billion to encourage semiconductor makers to build factories in the U.S.

Still, any new plants wouldn’t come online for years, offering no immediate relief for the shortage.

Intel Corp. last week announced a $20 billion chip-making hub on the outskirts of Columbus, Ohio, which the company expects to grow to be the world’s biggest silicon-manufacturing site. The plant is expected to be operational by 2025.

Samsung Electronics Co. and Taiwan Semiconductor Manufacturing Co. are also expanding their investments in the U.S., though that production won’t come online this year, either.

Raimondo and her team hope that in the meantime, increased information-sharing between chip suppliers and consumers can help minimize mismatches between supply and demand.

— With assistance from Molly Schuetz.