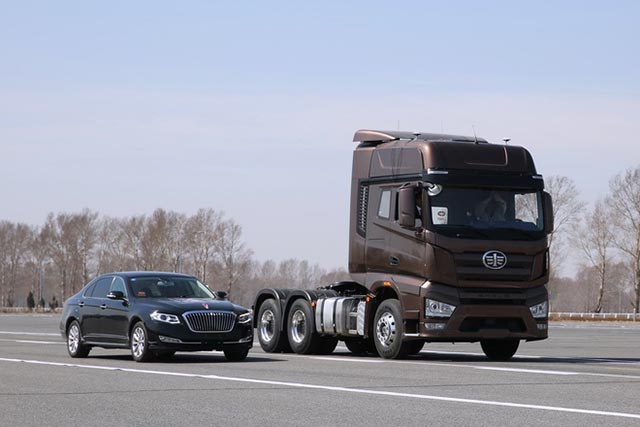 A driverless truck passed a navigation test in China last week and its manufacturer, FAW Jiefang Automotive Co., said it plans to commercialize the vehicle as early as next year, the Asia News Network reported.

The truck is able to react to traffic lights, responds to remote commands and is capable of overtaking other vehicles.

Heavy-duty truck manufacturer FAW Jiefang Automotive Co. has said it plans to commercialize the intelligent driving vehicle as early as 2018.

RELATED: Driverless trucks — A seismic shift for the labor force

“The company has built a whole industry chain to develop, manufacture and sell self-driving trucks,” Hu Hanjie, FAW Jiefang general manager, told the news network. “The participation of more firms will accelerate the technology’s use on heavy-duty vehicles.”

“China’s driverless truck is more of a trial and a means of catching up with overseas technology,” said John Zeng, managing director of LMC Automotive Consulting in Shanghai. “As one of the leading commercial vehicle manufacturers, it’s necessary for FAW Jiefang to have forward-looking technological research and development.”

Zeng told the news network the technology could also enhance the safety of the trucking industry, which has a much higher accident rate.

However, Zeng said the technology is still far from commercialization despite the company’s decision to put it on the market next year.

“Considering China’s complicated traffic and road situation, including a mixed flow of passenger and freight and poor compliance with traffic rules, it will be a long time before the technology hits the road,” Zeng said.