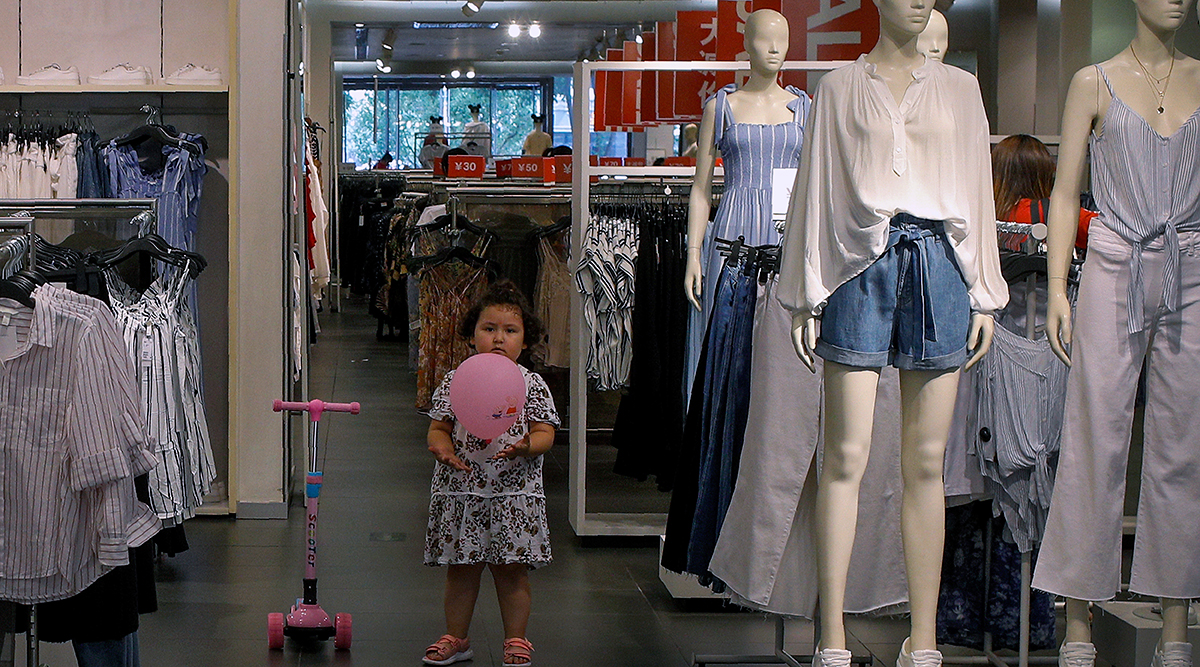 A child plays with a balloon at a clothing store in Beijing, on July 15, 2019. (Associated Press/Andy Wong)

BEIJING — China’s economic growth sank to its lowest level in at least 26 years in the quarter ending in June, adding to pressure on Chinese leaders as they fight a tariff war with Washington.

The world’s second-largest economy grew 6.2% over a year ago, down from the previous quarter’s 6.4%, government data showed July 15.

Forecasters expected China’s economy to rebound in late 2018 but pushed back that target after President Donald Trump hiked tariffs on Chinese imports to pressure Beijing over its technology development tactics. Now, economists say the slowdown might extend into next year. 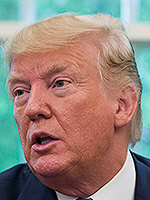 Trump and Chinese President Xi Jinping agreed last month to resume negotiations on the fight that has battered exporters on both sides. But economists warn their truce is fragile because they still face the same array of disputes that caused talks to break down in May.

“The trade war is having a huge impact on the Chinese economy,” Edward Moya of OANDA said in a report. “As trade negotiations struggle for meaningful progress, we are probably not near the bottom for China’s economy.”

Chinese leaders have stepped up spending and bank lending to keep growth within this year’s official target range of 6% to 6.5% and avert politically dangerous job losses. But they face an avalanche of unexpectedly bad news including plunging auto sales. 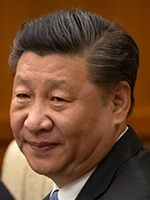 In the second half of the year, “the external environment may still be more complicated,” government spokesman Mao Shengyong said at a news conference.

Quarterly growth was the lowest since China began reporting such data in 1993, according to an employee of the press office of the National Bureau of Statistics, Dong Hui.

Jittery consumers are putting off major purchases, depressing demand for autos, home appliances and other goods.

“China has been surely hurt more in the trade war,” said Peng. “I am not very happy about job prospects because there just aren’t many opportunities out there.” 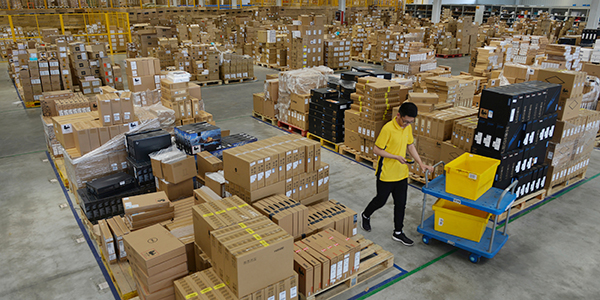 A worker passes by goods piled up at a warehouse in Nanjing, China, on June 15, 2019. (Chinatopix via Associated Press)

Weaker Chinese activity has global repercussions. China is the biggest export customer for its Asian neighbors and a major market for global suppliers of food, mobile phones, industrial technology and consumer goods.

The International Monetary Fund and private sector economists have cut this year’s Chinese growth forecast to as low as 6.2%, a further marked decline after last year’s three-decade low of 6.6%.

Urban families the ruling Communist Party is counting on to help propel consumer-driven growth to offset weak trade are being squeezed by rising living costs and slower wage growth.

Qiu Wanli, who works for an insurance company in the northwestern region of Xinjiang, said her family has little left over each month after paying a mortgage and expenses for her 3- and 6-year-old daughters and two elderly relatives. 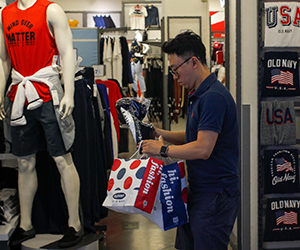 A man buys clothes from an American clothing store in Beijing, on July 15, 2019. (Associated Press/Andy Wong)

“The burden to support the family is fairly heavy,” said Qiu, 30. “We rarely travel and have no plans to because of financial conditions.”

The fight between the two biggest global traders has disrupted sales of goods from soybeans to medical equipment and rattled financial markets.

The biggest factor in the latest Chinese economic weakness is lackluster activity in construction and industry, according to Julian Evans-Pritchard of Capital Economics. He said that was likely to worsen because a boom in real estate development is fading.

“Combined with increasing headwinds from U.S. tariffs and weaker global growth, we expect this to culminate in a further slowdown in economic growth over the coming year,” Evans-Pritchard said in a report.

Beijing is pumping money into the economy through higher spending on building highways and other public works. That has shored up growth but set back efforts to reduce reliance on investment, which has pushed debt to levels that prompted credit rating agencies to cut China’s credit rating for government borrowing.

Spending on factories, real estate and other fixed assets rose 5.8% in the first half of the year, up 0.2 percentage points from the first five months.

Credit growth to support that has accelerated to dangerously high levels, according to Iris Pang of ING. She said in a report July 12 that suggests the economy “would be deteriorating” without stimulus.

“This worries us,” she said.