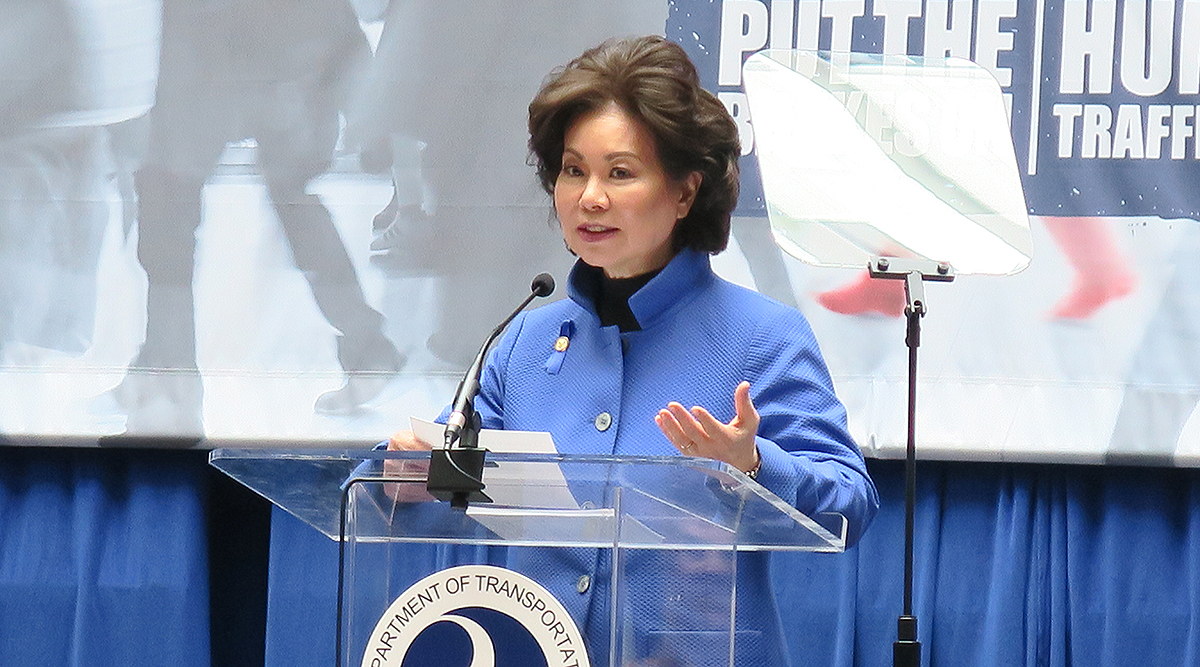 Chao emphasized a Department of Transportation initiative to fight human trafficking before a crowd of industry representatives and state transportation leaders at an event Jan. 28. Human trafficking, which involves the use of force to obtain labor or a commercial sex act, exploits about 25 million people, according to DOT’s Advisory Committee on Human Trafficking.

Specifically, Chao placed a renewed focus on the Transportation Leaders Against Human Trafficking pledge, which calls on participants to educate employees on how to recognize signs of human trafficking, raise awareness about the issue through outreach campaigns and measure the industry’s impact on human trafficking by sharing data. Chao asked the transportation industry to commit to 100 pledges in 100 days.

DOT’s Transportation Leaders Against Human Trafficking initiative, which was formed in 2012, is a group of transportation and travel industry representatives who connect groups to resources on training, policy development and public awareness.

According to Chao, more than 250 pledges have already been signed by various industry representatives, including state and local departments of transportation, transit agencies, trucking companies, ports, rail groups, airlines and nongovernmental organizations.

“I want to thank everyone who has made the training commitment. Please use your networks [and] your influence to enlist even more allies in this worthy cause,” Chao said. “Let’s bring our best efforts together. We want to restore dignity and make sure that we’re the kind of society that all of us can be proud to be a part of.”

DOT estimates over 1 million employees across all modes of transportation will be trained because of this initiative.

In December, DOT launched the annual Combating Human Trafficking in Transportation Impact Award, which was initially recommended by the Advisory Committee on Human Trafficking. Individuals, nongovernmental organizations, transportation associations, research institutions and state government agencies may compete for the award. The winner is awarded $50,000 cash. 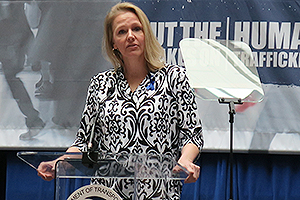 “We know that the transportation industry can play a critical role in combating human trafficking, and we must harness its potential,” Paris said. “It is going to take all of us.”

FMCSA Acting Administrator Jim Mullen agreed with Paris, noting that truckers are uniquely well-situated to identify and stop human trafficking because they spend so much time on the road.

“Whether it’s at rest stops, on the road [or at] retail facilities, they’re absolutely well-suited to recognize trafficking and step up and make calls and combat it,” Mullen told Transport Topics. “We’ll continue to collaborate with the industry and with Truckers Against Trafficking and other organizations that are fighting the scourge, and we’ll continue to do it with resources, manpower [and] money to make sure that we are doing it together.”