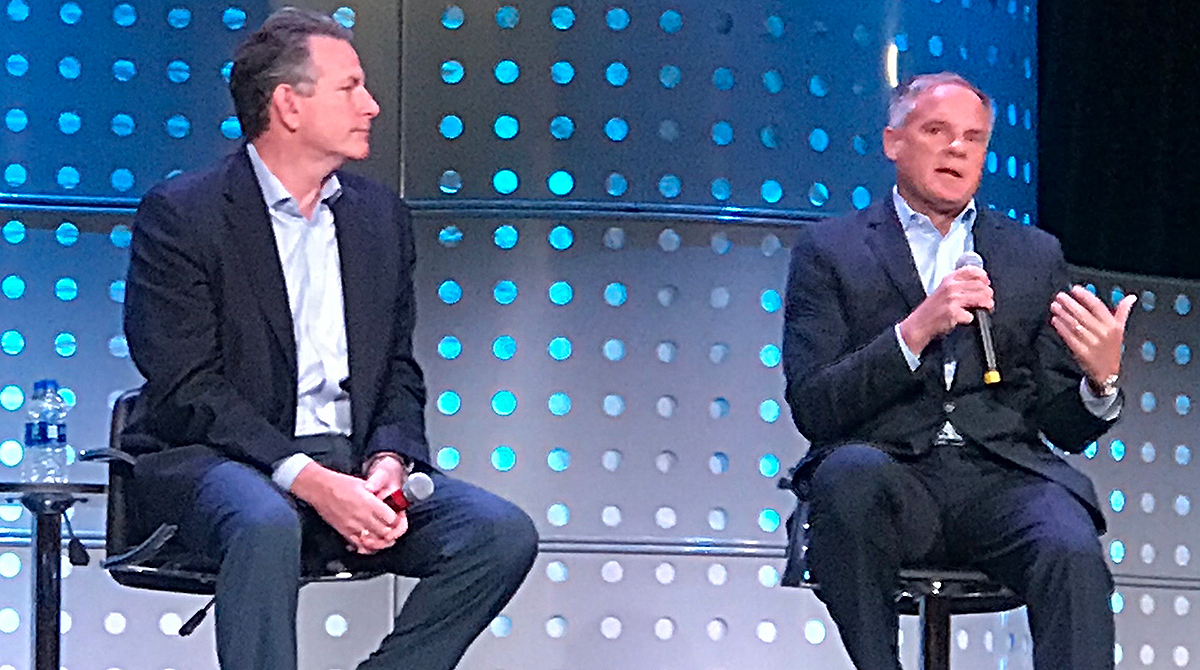 GRAPEVINE, Texas — Rick Dauch, CEO of Delphi Technologies, maker of fuel injectors for the light and commercial vehicle sectors, told an audience of aftermarket experts the powertrain space will consolidate very quickly over the next 12 months to five years.

Then, the day after Dauch’s comments Jan. 27 to the Heavy Duty Aftermarket Dialogue event here, BorgWarner Inc. agreed to acquire Delphi for some $3.3 billion in an all-stock transaction valuing Delphi’s enterprise value (market capitalization plus short- and long-term debt amid any cash on the company’s balance sheet).

In reckoning with cyclical demand in traditional markets and funding ongoing efforts toward electrification, “every turn is another decision; and the decisions seem to be coming much faster these days,” said Dana Inc. CEO Jim Kamsickas, who also spoke at the event.

He advised those in the audience to pivot their business models sooner rather than later, draw closer to supplier partners and end customers.

“If your customer believes in it, you have to set up your business model to support it,” Kamsickas said.

Dana is investing heavily on training, development and systems to help and to learn from wholesale and distribution specialists.

Fully electric trucks are expected to have 33% fewer parts compared with one powered by a diesel engine, he said. “Pick your number. It still requires a gearbox, still is going to have a motor. But customers are going to demand cleaner vehicles.”

Dana has invested about $300 million over the past couple of years on companies involved in electrification, he said, “because, frankly, the harder part is not having to build the product, it’s finding the software engineers.”

But that doesn’t mean Dana isn’t very focused on the internal combustion engine and bringing new technology there, too. “We are not falling asleep at the wheel because there is a long road there, as well.”

Dauch, casual and chatty on stage, said Delphi’s light-duty diesel business dropped almost 70% to $200 million, from more than $1.2 billion in less than five years, because of the downturn in automotive demand for diesel controllers and injectors.

He said that change is forcing Delphi to go through a massive restructuring — closing plants in Spain, France and England, and technical centers. “We are going to layoff about 40% of our [mechanical] engineers.”

On the other hand, he did not have enough electrical engineers. “That is one of the challenges.”

He said Delphi was going to make the systems in between the motors and batteries on electric vehicles — the inverters, chargers and battery management systems. “Software is really critical there.” It opened new plants for that in Mexico, China, Poland and Singapore and modified a North American plant.

For all that, Dauch said he was not exactly sure when electrification was going to step fully forward. “We had a new plant in China with great capacity and a great team, the launch was July of 2019.”

He said the Chinese government has changed the incentive plan for electric vehicles. “So we are not making any parts right now.”

At one point, Dauch asked the room for a show of hands from those who own a fully electric car. “I have one,” he said. “Anyone else?” He looked around, then said, “zero.”

He asked about hybrid-electric cars and got the same lack of response.

Still, Dauch said Delphi was going to double its electrification business over the next five years.

Kamsickas said Dana has gone all in on electrification and designed the business to be agnostic as far as power sources.

He suggested hydrogen electric vehicles ultimately will be the optimal solution. Yet, widespread hydrogen-fueled vehicles are 10 to 15 years away.

Meantime, Dana has a chance now “to exhale and get back to working on a lot of fundamentals instead of just getting the next part out the door,” Kamsickas said, referring to the surge in Class 8 sales in 2019.

He added that there was still plenty of replacement volume out there to go after in the commercial vehicle segment.