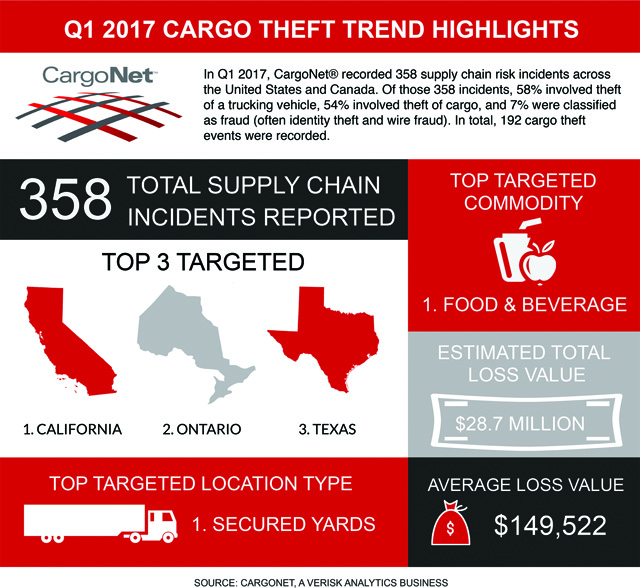 This story appears in the May 1 print edition of Transport Topics.

Cargo thefts rose in the first quarter as criminals stole more than $28.7 million in freight in 192 incidents, up from the same period in 2016 in terms of volume and total loss, according to quarterly data from CargoNet.

In total, 358 supply chain risk incidents were reported in the United States and Canada. Of those, 58% involved stealing a truck, 54% included cargo theft and 7% were related to fraudulent schemes such as identity theft or wire fraud, according to CargoNet.

Last month, three Miami men were convicted in Georgia on cargo theft charges and face up to 20 years in prison under a recent state law that stiffened penalties for the crime. They will be sentenced May 18.

California remained the most frequent location for incidents with 51 in the first quarter. The province of Ontario, not usually near the top, was No. 2 on the list with 29 crimes, a 262% increase year-over-year. The cities of Brampton, Mississauga and Toronto were hit multiple times.

“There are a couple ethnic-bound crime rings going after expensive items such as Coach purses and high-end luggage and get them out through the St. Lawrence Seaway to export them overseas,” Cargo Net Vice President of Operations Keith Lewis said.

However, Scott Cornell, second vice president and crime and theft specialist at insurance company Travelers, cautioned that the rise is likely due to more voluntary reporting of thefts than a significant surge in crime.

“Canada has had cargo theft problems for a while. Our unit has been working cases in and around Toronto for more than a decade,” he said.

Lewis added that since Canadian laws are weaker than those in the United States on cargo theft, police don’t typically create task forces to crack down on the crime.

“The law enforcement in Canada is very forgiving,” Lewis said. “Their search and seizure laws and Miranda are quite different than ours. It’s a totally different system, and this is just not that important of a crime to them.”

Food and beverages remain the most frequently stolen commodity, involved in 31% of the cases, with meat being the top target.

Jimmy DeMatteis, CEO of Des Moines Truck Brokers, said he noticed a shift from electronics thefts to food and beverages about 18 months ago. His company, which ranks No. 100 on the Transport Topics sector list of top freight brokerage firms, was the victim of a sophisticated attack in early 2016.

“They were very organized and knew the industry well enough to provide proper insurance, authority, safety records,” DeMatteis said. “We were one of three loads of meat stolen here in the Midwest. None of the three loads were recovered, but the FBI was able to trace the freight to a warehouse in Florida that distributed it to a sea vessel. They believed the freight probably ended up in Cuba.”

Des Moines Truck Brokers now requires workers to check the drivers’ identification and verify that the name and the Department of Transportation’s and Federal Motor Carrier Safety Administration’s motor carrier numbers on the truck match the company hired to do the job.

Russell Leo, CEO of RLS Logistics, agreed that checking the identification of the driver picking up a load is vital. He also told TT that every year people try unsuccessfully to use bogus credentials to infiltrate his carrier network.

“We check TIA Watchdog before we sign up any carrier to see if they or the owner has been reported for unethical behaviors,” Leo said, referring to the Transportation Intermediaries Association.

Zach Fox, an account executive at JZ Expedited Logistics, said his company deploys sophisticated measures because it is a TSA- and U.S. Customs- bonded warehouse provider.

“We deploy roughly 50 cameras throughout our warehouse interior, exterior and office, and an additional 10 infrareds and sensors inside our 3.7-acre drop yard with an electric gate with key card access required upon entry and exit, along with the tags of the truck and trailer being captured on both ends,” Fox said.

Sensitech Inc., formerly FreightWatch International, another major cargo theft prevention group, is expected to release its first-quarter data in the next few weeks.