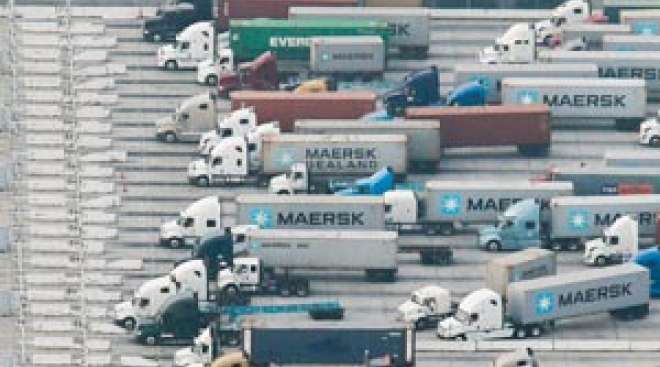 Port of Los Angeles, Feb. 18 by Patrick T. Fallon/Bloomberg News
Ports are coming back to life along the U.S. West Coast after dockworkers resolved a nine-month labor standoff, though the cargo backlog from ships waiting offshore may take eight weeks to clear.

At the International Longshore and Warehouse Union’s dispatch hall in Wilmington, California, about 1,500 jobs were posted for the night shift Saturday, compared with the usual 800 to 1,000, said Mondo Porras, the local’s vice president.

“They’ve turned the firehose on,” Jon Slangerup, chief executive officer of the Port of Long Beach, said in a telephone interview. Both the Pacific Maritime Association and the union are “committed to digging out of this as quickly as possible,” he said.

The five-year contract reached Feb. 20 after U.S. Labor Secretary Tom Perez imposed a deadline for a deal averted a shutdown of 29 ports that would have cost the U.S. economy $2 billion a day. The strife had reduced productivity at West Coast ports by as much as half since November, with California citrus fruit bound for Asia spoiling on the docks, while carmakers flew in components at more than 10 times the cost of sending them by sea.

The West Coast ports, responsible for 43.5% of U.S. trade, have been operating at reduced capacity since late October as dockworkers slowed cargo and employers cut shifts.

The Port of Los Angeles, the nation’s busiest, handled 29% less cargo in January 2015 compared with January 2014, and volumes were down 19% in neighboring Long Beach, the second-busiest, according to statements from both ports.

Labor shortages related to the contract talks haven’t been the only issue slowing down commerce. Long Beach, for example, has been hampered by congestion resulting from the inefficient loading of the latest generation of giant ships and a lack of truck chassis to transport cargo containers, Slangerup said this month.

It will take six to eight weeks for West Coast ports to recover from the cargo backlog, according to the Port of Oakland and the National Retail Federation, which represents stores that resorted to stockpiling seasonal merchandise in warehouses and shifting to East and Gulf coast ports.

Hundreds of dockworkers packed the union dispatch hall in Wilmington Feb. 21 to receive their assignments for the 6 p.m. to 2 a.m. shift.

“There’s all kinds of work to get to all these ships out there,” said Adolph “Junior” Negrete, a Los Angeles dockworker for 29 years. “I will be able to work six or seven days in a row if I want to.”

Negrete said that during the slowdowns and weekend and holiday closings, he was down to working as few as three days a week.

At the Port of Oakland, 11 vessels were at berth on Feb. 21, with three more at anchor and 13 in the Pacific Ocean outside San Francisco Bay awaiting berths, said Michael Zampa, a spokesman.

In Seattle, three terminals were full, with five vessels waiting to be unloaded, said Peter McGraw, a spokesman. Another five were at anchor near the port, with seven more waiting near the Port of Tacoma.

Perez arrived in San Francisco on Feb. 17, dispatched by President Barack Obama after a federal mediator failed to bridge the gap between the two sides. Under the compromise he brokered, a panel will hear workplace grievances, instead of a single arbitrator. The two sides had been stuck on the issue after hammering out terms for salaries, benefits and retraining workers displaced by automation.

Perez gave the union and shipping lines and terminal operators at the ports until the end of Feb. 20 to respond to a contract settlement he proposed. He said that had they not reached an agreement, he would have moved the talks to Washington.

The tentative settlement still needs approval from dockworkers from San Diego to Bellingham, Washington. The union and management have declined to release details of the contract agreement until they are presented to members.