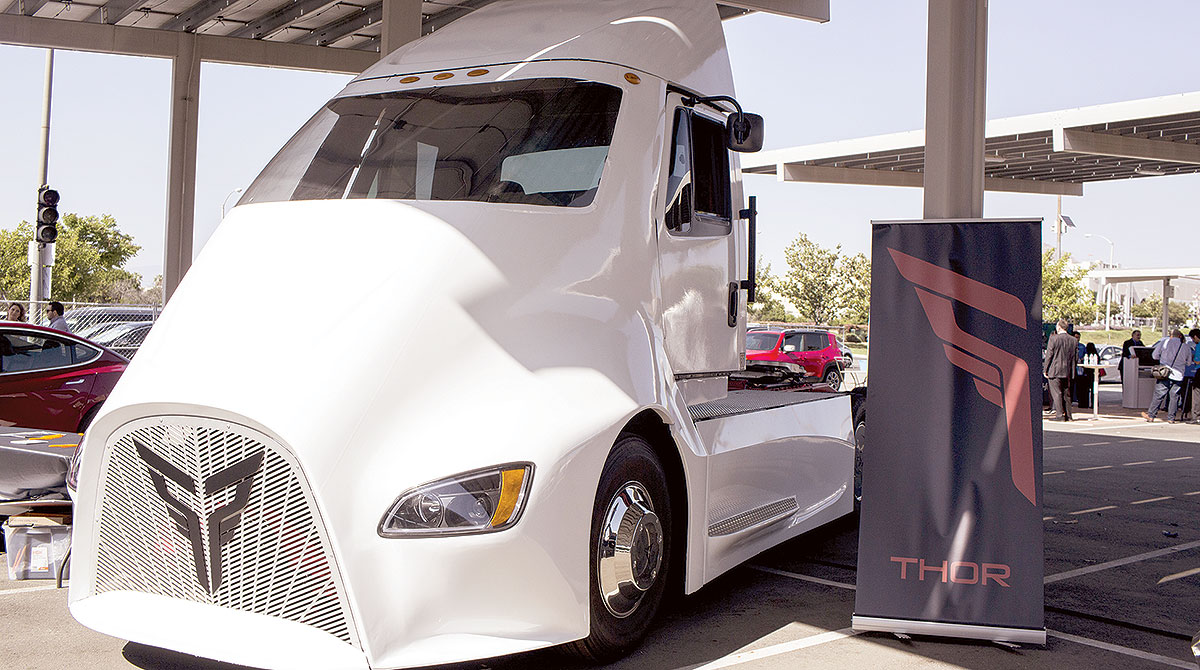 A Thor ET-One all-electric semi-truck on display at the CARB Technology Symposium in Riverside, Calif., in 2018. (Dania Maxwell/ Bloomberg News)

California environmental regulators are working on a plan to speed up the deployment of electric medium- and heavy-duty trucks operating on the state’s streets and highways.

At a public workshop Feb. 25, California Air Resources Board officials said they are aiming to offer for approval by the end of this year the agency’s proposed regulation that would require a certain percentage of all trucks sold in the state to be electric or hydrogen fuel-cell trucks.

“The zero-emission truck market is beginning to grow rapidly with dozens of models commercially available today and many major manufacturers announcing plans for future commercialization of battery-electric and hydrogen fuel cell electric trucks and buses,” said a CARB document presented for discussion at the hours-long public workshop.

The document also said that a wide range of battery-electric trucks are already becoming competitive with diesel-fueled vehicles in the right application and are expected to have a favorable comparison to diesel vehicles by 2024.

“The general idea is that the states have policies to get zero-emissions trucks into the marketplace,” Paul Arneja, a CARB air resources engineer, told Transport Topics. “The end goal that we’re pretty sure of is to reach 40,000 electric trucks by 2030.”

Arneja said CARB staff has been considering a mandate that manufacturers ensure that 2.5% of their overall sales are of electric trucks beginning in 2024, possibly increasing the mandate to 15% by 2030.

“Basically, CARB is committed to imposing a sales mandate on the manufacturers,” said Mike Tunnell, American Trucking Associations’ California-based director of energy and environmental affairs. “Anybody that does $2 billion or higher with sales in California would be required to sell a portion of certain vehicles as electric.”

Tunnell said ATA is closely watching the development of the proposal, particularly a possible requirement that fleets that do purchase the electric vehicles report to CARB on their performance.

CARB originally was considering a 2024 proposal requirement to apply to only Class 2 through Class 7 vehicles, but more recently has been looking at adding Class 8s into the mix.

“CARB is cognizant that there’s a danger if they get this wrong. They could impact the electric truck market going forward,” Tunnell said. “So they want to make sure this rule accelerates the deployment of the most promising applications for this technology.”

Arneja said CARB is looking mostly at those vehicle segments that are most suited for electrification.

“We’re mostly concentrating at first on classes 2-7,” Arneja said. “Class 8 we still have not figured out what to do there. We’re undecided at this point.”

Arneja added, “We have seen a lot of announcements from the major truck manufacturers like Peterbilt, Volvo and Freightliner, beyond just the newer startups. They’re all looking at this technology seriously.”

To project the present and future total costs of ownership for diesel versus electric trucks, CARB modeled a Class 3 passenger van, a Class 6 walk-in step van and a Class 8 day cab tractor used in regional operations.

The key components of the cost estimates included the purchase of the vehicle, ongoing fueling and maintenance costs, low-carbon fuel standard revenue, infrastructure and other assorted vehicle costs.

The analysis indicated that a wide range of battery-electric trucks are already becoming competitive with diesel-fueled vehicles in the right application and are expected to have a favorable comparison to diesel vehicles by 2024.

For example, the modeling showed that total cost of ownership for Class 8 regional diesel day cab tractors, based on 54,000 miles driven a year for 12 years total, was less than electric trucks for 2018. However, diesel truck ownership costs remained steady in 2024 and 2030, while battery-electric run tractor costs declined significantly below diesel.