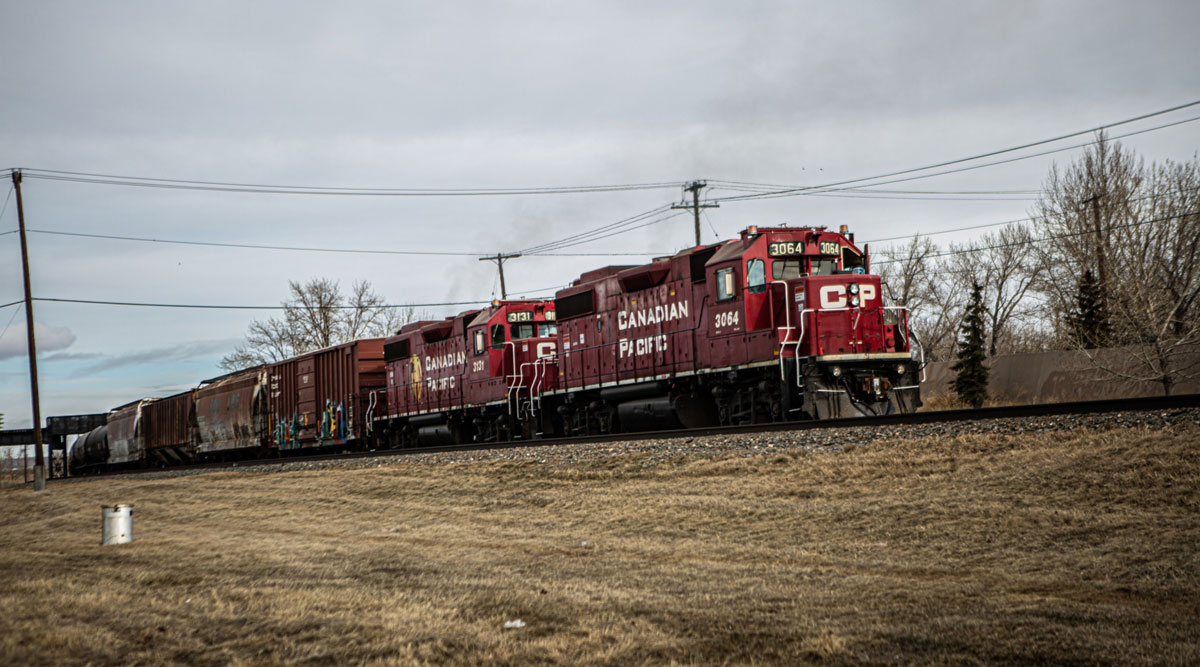 Mergers and acquisitions are off to their fastest start to a year ever in Canada, driven by a combination of cheap financing for buyers, high valuations for sellers and an improving economic outlook that’s encouraging companies to make major moves.

Canadian companies have been involved this year in 1,168 deals with a total value of $115 billion, including assumed debt, according to data compiled by Bloomberg. That’s more than double the $44.3 billion in the year-earlier period and the highest first-quarter total in data stretching back to 1993.

Those long-studied deals got a push from low interest rates that allowed the buyers to take on large amounts of leverage. They also were helped by estimates for Canadian economic growth of 5.4% this year and 4% next year, which give acquirers confidence they’ll earn enough to pay off those debt tabs.

“Those are numbers we haven’t seen in North America in decades,” Dan Barclay, CEO of BMO Capital Markets, said of the economic forecasts in an interview. “The forward-looking economic growth — the ability to grow and make money — is about as good as it has been in my career right now.” 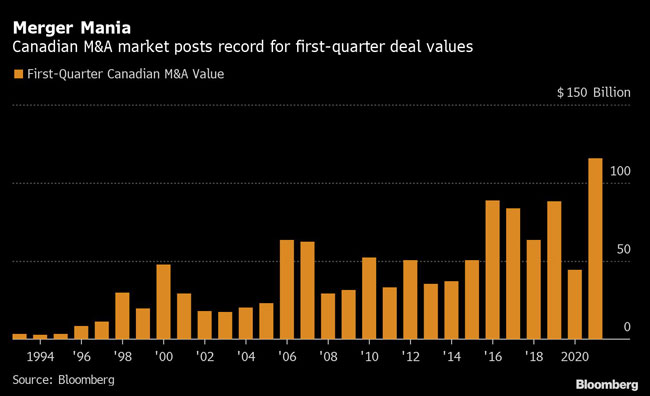 BMO Capital Markets, a unit of Bank of Montreal, has advised on 12 Canadian deals this year with a total value of $44.3 billion, trailing only Bank of America Corp. BMO is advising Canadian Pacific on its acquisition of Kansas City Southern, which ranks as the second-largest takeover by a Canadian company in the past decade. Enbridge Inc.’s $42.2 billion acquisition of Spectra Energy in 2016 was the biggest.

Canadian Pacific had attempted large acquisitions over the years, but came up empty. The company entered merger talks with CSX Corp. in 2014 in a bid to create a company with a combined market value of $62.5 billion, but the negotiations failed. Two years later, the railroad operator made and ultimately abandoned a $28.9 billion hostile bid for Norfolk Southern Corp.

This time, the company found a willing seller in Kansas City Southern, which had seen its share price rise 141% from its pandemic low of $92.86 before striking the deal. Canadian Pacific’s cash-and-stock offer values the railway at $275 a share.

Rogers was also stymied in previous attempts for a transformative deal. The company in August teamed up with Altice USA Inc. to attempt a $7.8 billion hostile bid for Cogeco Inc., but the proposal was rebuffed. But it found a partner in the Shaw family, which decided that selling at a 69% premium was better than staying independent.

But neither of those deals would have been feasible without large amounts of debt. Rogers has lined up a C$19 billion bridge loan with Bank of America to help fund the acquisition, people familiar with the matter told Bloomberg. Canadian Pacific is raising about $8.6 billion of debt to help fund its deal.

“Confidence in the future drives how much leverage you want to take,” BMO’s Barclay said. “So if you’re very confident that when you make an acquisition that it will work out and you will be doing something for your shareholders, you’ll take more leverage.”

Barclay said companies’ confidence looks set to persist, and that there will be “lots and lots” more dealmaking to come this year.

Canada’s resources industries and its burgeoning role as a center of technology should continue to drive major cross-border activity, said Bruce Rothney, chairman and CEO of Barclays Plc’s operations in Canada. Barclays has advised on 11 Canadian deals with a value of $35.9 billion, ranking it third so far this year.

Canada has become revered as a world center for enterprise software as well as internet and financial technology, which will attract capital to the country in coming decades, said Rothney, whose firm is advising Rogers on the Shaw deal. Special purpose acquisition companies — which have raised almost $190 billion globally since 2019, according to data compiled by Bloomberg — have added a whole new pool of capital seeking deals, which dominated activity in 2020 and will continue to drive dealmaking, he said.

Perhaps the dominant theme of the year ahead will be the continued integration of U.S. and Canadian economies, helped by a new U.S. administration that’s more supportive of cross-border trade and capital flows, Rothney said, pointing to the railway deal as an example of the trend.

“The featured story for this year is going to be acceleration of cross-border M&A driven by commodity-price strengthening and increasing confidence related to the latter stages of COVID,” he said. “We have many large Canadian clients that are actively exploring possibilities, including the pension funds and the sponsor community, but also strategics that have got real ambition to continue to build their operations in the U.S.”