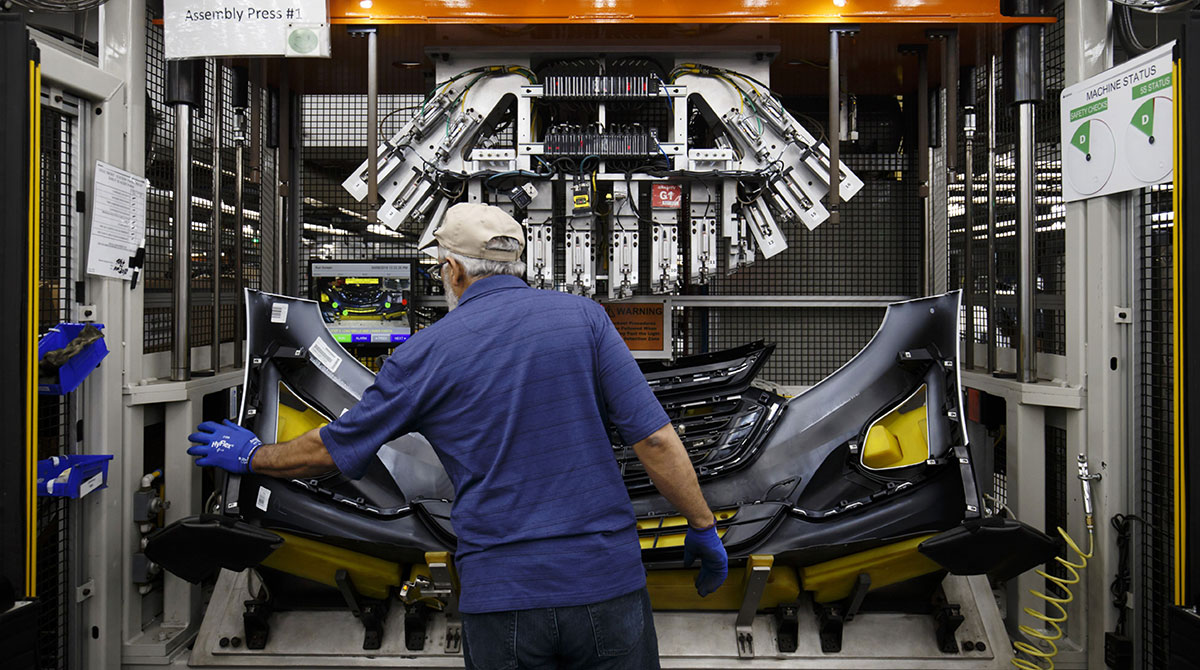 An employee assembles a bumper at an auto parts plant in Guelph, Ontario. (Cole Burston/Bloomberg)

Canada plans to formally join Mexico in calling for an arbitration panel to resolve a dispute with the U.S. over how to interpret rules governing the origin of vehicle parts.

The two countries expect to request in the first days of January the creation of a tribunal of experts to rule on the matter as allowed under the U.S.-Mexico-Canada Agreement, known as USMCA, according to three people familiar with the plans. The individuals spoke on condition they not be identified because they aren’t authorized to speak publicly on the issue.

The panel will be tasked with deciding whether the U.S. application of the content rules, known as rules of origin, is inconsistent with the trade pact. The experts would outline measures to be taken if a violation is found.

Canada and Mexico can seek the formation of a three- or five-member panel chosen from a roster of legal and trade experts previously agreed to under USMCA. The panel process would be finished at earliest the start of July 2022, based on timelines laid out in the trade deal, according to an August report from attorneys from White & Case.

The panel is the next step allowed under the dispute resolution mechanism of the trade agreement, after discussions between Mexico and the U.S. failed to settle the disagreement.

It would also represent an escalation for Canada, which has said it had only been monitoring talks between its two trading partners as an interested third party.

But Prime Minister Justin Trudeau, who was re-elected with a minority government in September, has faced pressure from business leaders, particularly from the nation’s car industry, to become more aggressive against what Canadians sees as growing U.S. trade protectionism.

Over the past few weeks, Canada and the U.S. have clashed over President Joe Biden’s push to grant additional tax rebates for electric vehicles built by unionized American workers. The U.S., meanwhile, has pushed back against a Canadian proposal for levies on U.S.-based tech giants. Increased U.S. duties on softwood lumber and a halt to shipments of potatoes from Atlantic Canada are also causing friction.

The Canadian government announced on Dec. 21 that it is challenging U.S. duties on Canadian softwood lumber through the USMCA’s dispute resolution mechanism. Last week, Trudeau instructed his top economic ministers to take tougher positions on trade issues amid growing disputes with the U.S.

The automotive conflict focuses on differences over how to calculate the percentage of a vehicle that comes collectively from the three countries.

Both Mexico and Canada believe the trade deal stipulates that more regionally produced parts should count toward duty-free shipping than the U.S. wants to allow. Motor vehicles are the top manufactured product traded between the three countries.