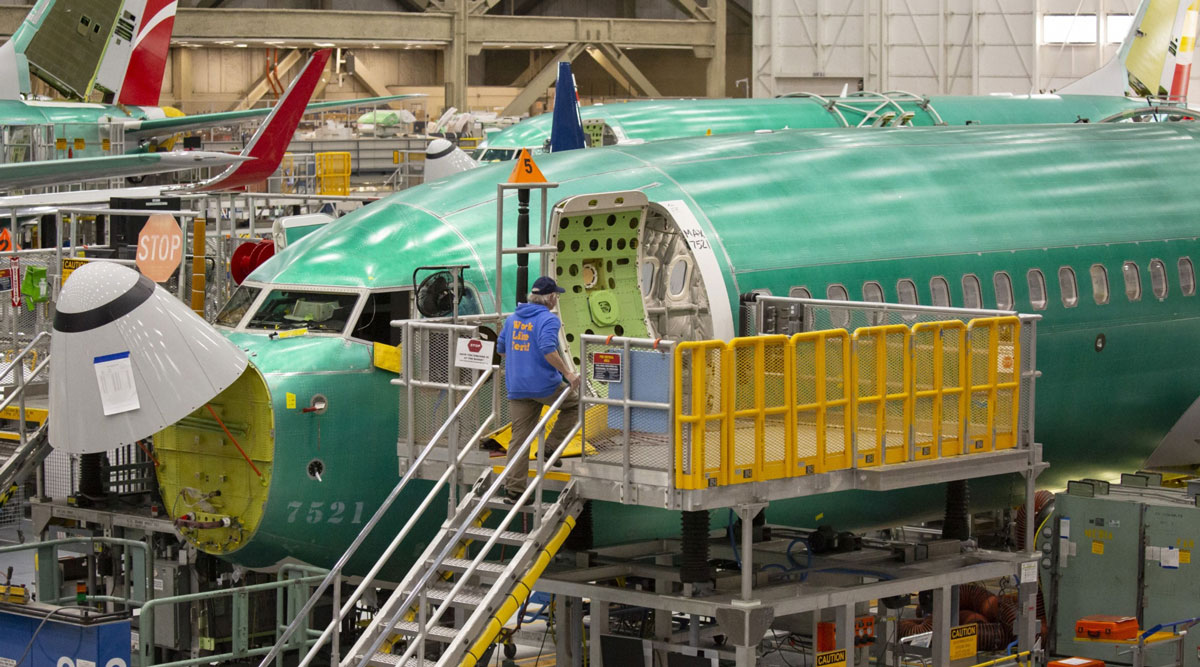 A Boeing 737 Max airplane sits on the production line at the company's manufacturing facility in Renton, Wash., in March 2019. (David Ryder/Bloomberg News)

Boeing Co. and its suppliers climbed as the plane maker resumed production of the 737 Max jetliner while working with regulators to end a yearlong global grounding.

Output of the Max resumed at a low rate as employees focused on improving quality and streamlining the way the plane is built, Boeing said in a statement. The company halted work at its Seattle-area plant in January, uncertain about when regulators would lift a grounding imposed in March 2019 after two crashes killed 346 people.

The flying ban already had hurt sales of Boeing’s best-selling jet and tarnished the company’s reputation. Now the Max will re-enter a market that’s been reshaped by the coronavirus pandemic. Airlines that were clamoring for the planes are postponing deliveries as they ride out a sharp downturn. Boeing’s suppliers have been reeling from shortages and financial uncertainty.

The plane maker’s shares jumped 5.1% to $157.13 before the start of regular trading May 28 in New York. Boeing had plunged 54% this year through May 27, the worst performance on the Dow Jones Industrial Average.

Spirit AeroSystems Holdings Inc., which manufactures about 70% of the Max, advanced 7.6% in premarket trading to $26.20. Spirit started work on the Max earlier this month. Another supplier, Triumph Group Inc. surged 23%.

Teams started to “warm up” the center of three production lines at the Max factory, using new processes intended to eliminate out-of-sequence work along with the rash of tools, rags and other debris that have turned up in completed aircraft, Stan Deal, who heads Boeing’s commercial division, said in a note to employees May 27.

“When we temporarily suspended 737 Max production, we made a decision to invest in our people and our factories to drive improvements in safety, quality and production stability,” he wrote. The manufacturer is rolling out more than a dozen initiatives intended to improve safety and quality on its 737 assembly lines.

Earlier May 27, Boeing said it would cut 6,770 jobs in the U.S. after 5,520 employees agreed to voluntary layoffs. The company will reduce overseas payroll as well.

“These efforts, coupled with process improvement initiatives, should help offset some of the headwinds associated with lower production rates across the commercial business,” RBC Capital Markets analyst Michael Eisen wrote in a note to investors. While he predicted that Boeing’s jetliner unit would operate at a loss this year, he projected a 2.4% operating profit margin in the first quarter of next year.

Although the timing of the regulatory approval remains in question, Boeing has said it is targeting the Max’s return in the third quarter. Eisen said the restart of production increased the likelihood that the recertification target would be met.

Michael O’Leary, head of Ryanair Holdings, told Bloomberg TV on May 26 that the model should return to service in North America by late September or early October. His airline, which is one of Boeing’s largest 737 customers, expects to take its initial Max deliveries in the fourth quarter, he added.

“Right now, the focus is on the software validation and technical documentation required for a certification flight,” Deal said of the regulatory process. “We look forward to resuming deliveries on our backlog of over 3,800 737 Max airplanes while recognizing that the ultimate time frame will be set by regulators.”