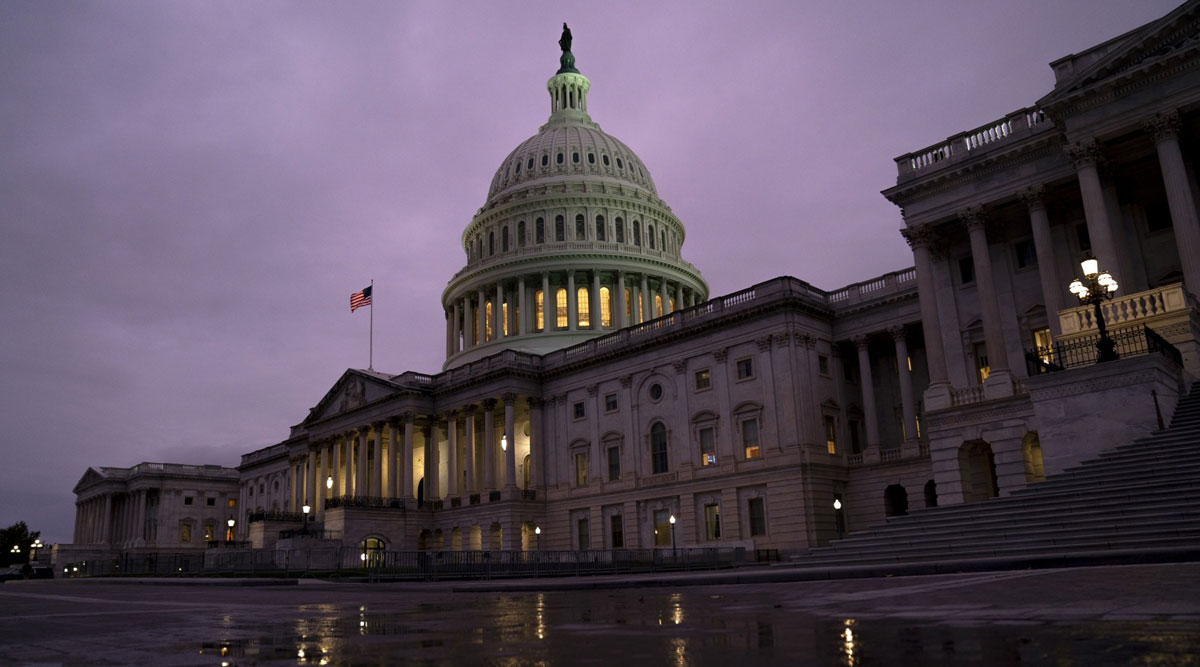 The U.S. Capitol building is seen at dusk in Washington, D.C., on Nov. 12. (Stefani Reynolds/Bloomberg News)

The Democratic and Republican lawmakers working on a compromise pandemic relief plan delivered a more detailed summary of their proposal Dec. 9 but haven’t yet resolved the deadlock over a business liability shield and aid to state and local governments.

The lack of a compromise proposal on these two issue raises questions of whether the bipartisan plan will provide the path forward to an agreement that can be formed into legislation over the next week. Leaders in both parties again accused each other of being uninterested in good-faith bargaining.

Their outline, obtained by Bloomberg News, largely follows the contours of their initial $908 billion proposal, filling in amounts and some specific programs.

The group would extend $300-per-week supplemental unemployment insurance for four months and fund a second round of loans for the Paycheck Protection Program for businesses with 300 or fewer employees. Those loan are forgiven if requirements are met and amounts spent on business expenses wouldn’t be taxable. The plan would provide $10 billion for child care providers, $82 billion for education, $13 billion for farmers and support for airlines.

The proposal is now competing with a $916 billion plan released by Treasury Secretary Steven Mnuchin and backed by GOP congressional leaders and President Donald Trump. House Speaker Nancy Pelosi and Senate Democratic leader Chuck Schumer have objected to parts of that plan and said they want to use the bipartisan group’s proposal as the basis for negotiations.

Despite the optimism for a deal sparked by both the bipartisan proposal and Mnuchin’s plan, the two sides remain stuck short of agreement with little more than a week left to get it done. Stocks wavered as investors assessed the prospects for deal.

Senate Majority Leader Mitch McConnell on Dec. 9 blasted Pelosi and Schumer’s response to Mnuchin’s plan as a sign that they still don’t want to compromise. He reiterated his argument that the most contentious items be set aside and that Congress proceed with critical components that are widely agreed upon, including small-business help.

The Mnuchin plan differs in important ways from the bipartisan alternative. It includes $600 stimulus payments to individuals, which could win support from both Republicans and Democrats, but it pays for that in part through cutting the bipartisan proposal for $300 a week in supplemental unemployment aid.

McConnell said on the Senate floor that Pelosi and Schumer have “delayed, deflected, moved the goal posts” in talks on pandemic relief. He again advocated dropping the provisions on liability limits for employers and state and local aid.

Sen. Joe Manchin, a West Virginia Democrat who is working on the bipartisan plan, said the group will try to resolve these final two sticking points by Dec. 9.

Pelosi and Schumer said in a joint statement on Dec. 8 that Mnuchin’s proposal marked “progress” because it brought McConnell closer to the $908 billion framework from the group of Democratic and Republican lawmakers. But they said Mnuchin’s omission of supplementary jobless benefits was “unacceptable.”

Republican Sen. John Cornyn, who took part in negotiations on the bipartisan proposal, said the group couldn’t resolve “the key hangups” on liability and state and local aid. With time running out, it’s going to be up to the leaders from each party in the House and Senate to hammer out a deal.

“The reality is we don’t have time to handle this through regular order,” Cornyn said. “So it’s going to be negotiated by ‘the four corners.’”

There was no indication of any planned talks between party leaders.

Dick Durbin, the No. 2 Senate Democrat, said McConnell’s remarks suggested he doesn’t take the bipartisan proposal seriously and called on the GOP leader to let it stand for a vote on the Senate floor. “Let’s get this debate under way,” he said.

Lawmakers from both parties have said that any COVID-19 relief deal would be attached to a government-spending bill. Current stopgap funding for federal agencies runs out Dec. 11, and the House plans to vote Dec. 9 on a new seven-day continuing resolution to avert a shutdown. The Senate aims to take that up thereafter to give both chambers more time to finalize and vote on a longer term spending bill.

Erik Wasson, Laura Litvan and Steven T. Dennis were the primary contributors to this report.