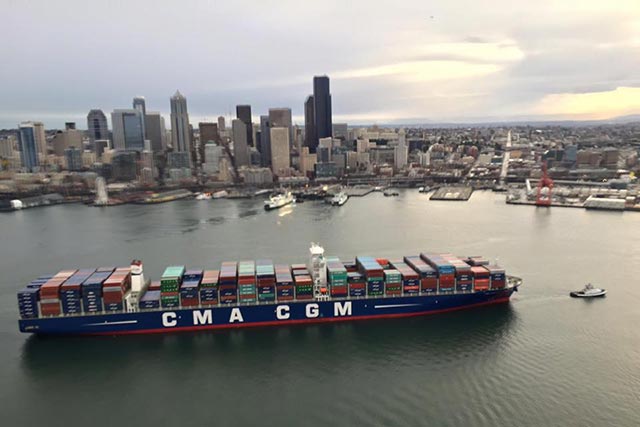 The largest cargo ship to visit the United States, the CMA CGM Benjamin Franklin, arrived in Seattle on Feb. 29 morning to greetings from Mayor Ed Murray and other dignitaries, and a flurry of media coverage.

Longer than the Empire State Building, wider than a football field and as tall as a 20-floor building, the gigantic ship loomed at The Northwest Seaport Alliance’s Terminal 18 as Murray proclaimed Seattle’s past, present and future as a center of the maritime industry.

But beneath the pomp and publicity, the big ship’s arrival underscores the fierce competition the Puget Sound ports are facing as they seek to attract these ever-larger ships. Global container traffic is flat, shipping companies are seeking to make fewer ports of call and competition is strengthening everywhere — from ports in Canada to those on the East Coast awaiting the widening of the Panama Canal.

The visit by the Benjamin Franklin is intended to show that The Northwest Seaport Alliance — the marine cargo operating partnership of the ports of Seattle and Tacoma — can handle such big ships, which are seen as the future of the industry.

Typical-size container vessels run in the range of 8,000 to10,000 TEUs — itself a rapid change from 10 years ago, when 6,000 TEUs was the average, said Peter McGraw, a spokesman for The Northwest Seaport Alliance.

“It’ll probably be several years before we see something that big again,” McGraw said of the Benjamin Franklin. “But we’ll be seeing larger vessels in the 13,000 to 14,000 size before that.”

The Benjamin Franklin, owned by French container shipping company CMA CGM, is visiting Seattle, after California stops in Long Beach and Oakland. It’s part of a test call to see how quickly cranes at the ports can load and unload, how quickly containers can be moved to and from the port and how quickly the items can be delivered to their final destinations.

On this visit, the ship will be unloading cargo from China, including electronics, clothing, furniture and sporting goods intended for the likes of Target, Best Buy and Amazon.

Because the Benjamin Franklin greatly exceeds the size of ships the ports usually see, the test call will show what parts of the infrastructure need to be expanded or upgraded.

Terminal 18 already has the cranes to handle this size vessel, and the alliance is upgrading Terminal 5 to make it big-ship ready as well, McGraw said.

It will take about $400 million to $600 million to update the terminals, estimated John Wolfe, CEO of The Northwest Seaport Alliance.

But it’s not just the terminals themselves that would need upgrading. Over the next 10 years, about $800 million to $1 billion will be needed to upgrade the terminals in the Seaport Alliance and the connecting freight infrastructure, including the network of roads and rails, Wolfe said.

He said a mix of federal, state and local grants, and private-sector support, as well as the ports’ own revenue streams, could fund the upgrades.

The upgrades are seen as important for the port to remain competitive at a time when many West Coast ports are seeing flat or lower container traffic.

Currently, there are “too many ships and too much cargo space on those ships and not enough demand,” said Jean-Paul Rodrigue, a professor of global studies and geography at Hofstra University who specializes in maritime shipping.

“The shipping lines are bleeding,” he said. “Ports are also desperate.”