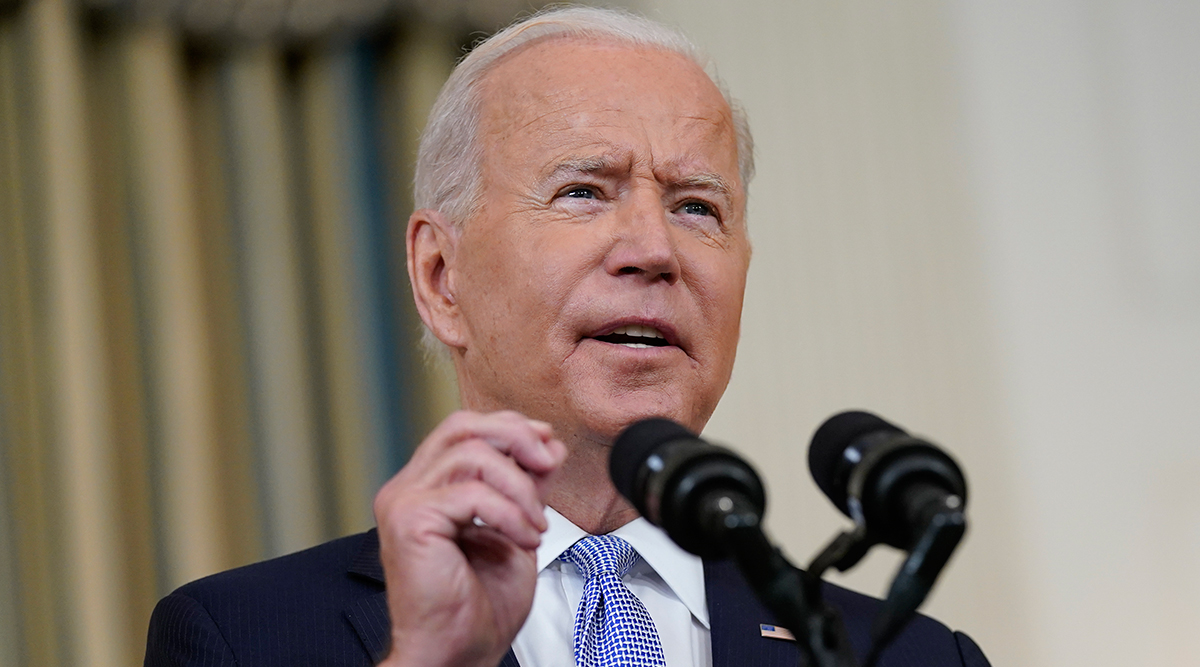 WASHINGTON — President Joe Biden said Sept. 24 that talks over his $3.5 trillion rebuilding plan have hit a “stalemate” in Congress as he made the case for his expansive effort to recast the nation’s tax and spending programs and make what he sees as sweeping, overdue investments.

Biden spoke at the White House as Democrats in the House and Senate are laboring to finish drafts and overcome differences between the party’s centrist and moderate factions. Despite efforts by the president and congressional leaders to show progress, Biden cast the road ahead as long and potentially cumbersome, even with upcoming deadlines.

“We’re getting down to the hard spot here,” Biden told reporters at the White House. “We’re at this stalemate at the moment.”

Biden said the process is “going to be up and down” but “hopefully at the end of the day I’ll be able to deliver on what I said I would do.”

The president’s acknowledgment of Democrats’ disagreements — and they have serious differences over taxes, health, climate change and the ultimate price tag — contrasted with congressional leaders’ more upbeat tone in recent days. Using carefully chosen words, top Democrats have seemed to be trying to create a sense of momentum as House votes approach.

On Sept. 24, House Speaker Nancy Pelosi (D-Calif.) predicted passage of both pillars of Biden’s domestic agenda. One is a still-evolving $3.5 trillion package of social safety net and climate programs, the other a separate $1 trillion measure financing highway, internet and other infrastructure projects that already has passed the Senate with bipartisan support.

“We’re going to pass both bills,” she told reporters.

But she did not spell out how she and her Senate counterpart, Majority Leader Chuck Schumer (D-N.Y.) would resolve disagreements and distrust between their party’s moderate and progressive wings that has stalled both measures. And there remained confusion about the voting schedule, which will be crucial.

But progressives are threatening to vote to derail the infrastructure legislation until a final version of their favorite — the $3.5 trillion social and environment bill — passes the Senate and returns to the House. Progressives think delaying the public works bill would pressure moderates to back the larger measure. 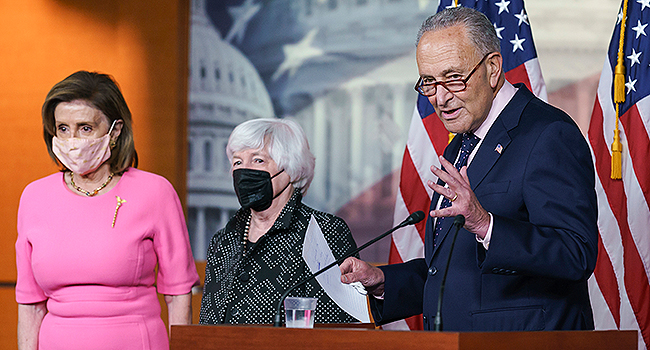 “We’re bringing the bill up, we will have a vote when we have the votes,” Pelosi told a reporter Sept. 24 about the infrastructure bill’s timing. While she said debate would begin Sept. 27, her remarks suggested that final passage of the public works legislation could slip.

Pelosi also told reporters that “the plan” was for her chamber to consider the $3.5 trillion package next week as well. It remained unclear how House-Senate bargainers would solve their differences over that bill that quickly.

The president said his private meetings with some two dozen Democratic lawmakers this week in efforts to hasten progress and close the deal went well — describing the tone as collegial and with “no hollering.”

But as lawmakers raised objections over the sweep and scope of the plan, which is to be funded by higher taxes on corporations and the wealthy, Biden said he tried to get them focused on priorities — what they can and can’t live with.

”It’s about paying your fair share, for lord’s sake,” Biden said. “There clearly is enough, from a panoply of options, to pay for whatever it is.”

In a stark reality check, Biden suggested talks could drag to the end of the year. “It’s just going to take some time,” he said.

Lawmakers are working nonstop and Biden is facing pressure to close the deal. Pelosi met Sept. 24 at the Capitol with her leadership team, and the House Budget Committee planned a rare Saturday session to take the strictly procedural step of sending the $3.5 trillion bill, as drafted by 13 other House panels, to the full chamber without any changes.

Before the House votes on that measure, it is certain to change, perhaps more than once, to reflect compromises reached with Senate Democrats.

Biden’s big vision over his “Build Back Better” campaign promise proposes expanding health, education and federal programs, with more services for Americans of all ages, while investing heavily in efforts to tackle climate change. All this would be paid for largely by hiking tax rates on corporations and wealthy individuals, those earning beyond $400,000 a year, or $450,000 for married couples.

But centrist Democrats see the overall price tag as too much, while progressive lawmakers are hesitant to compromise any further after already having dropped even more ambitious ideas.