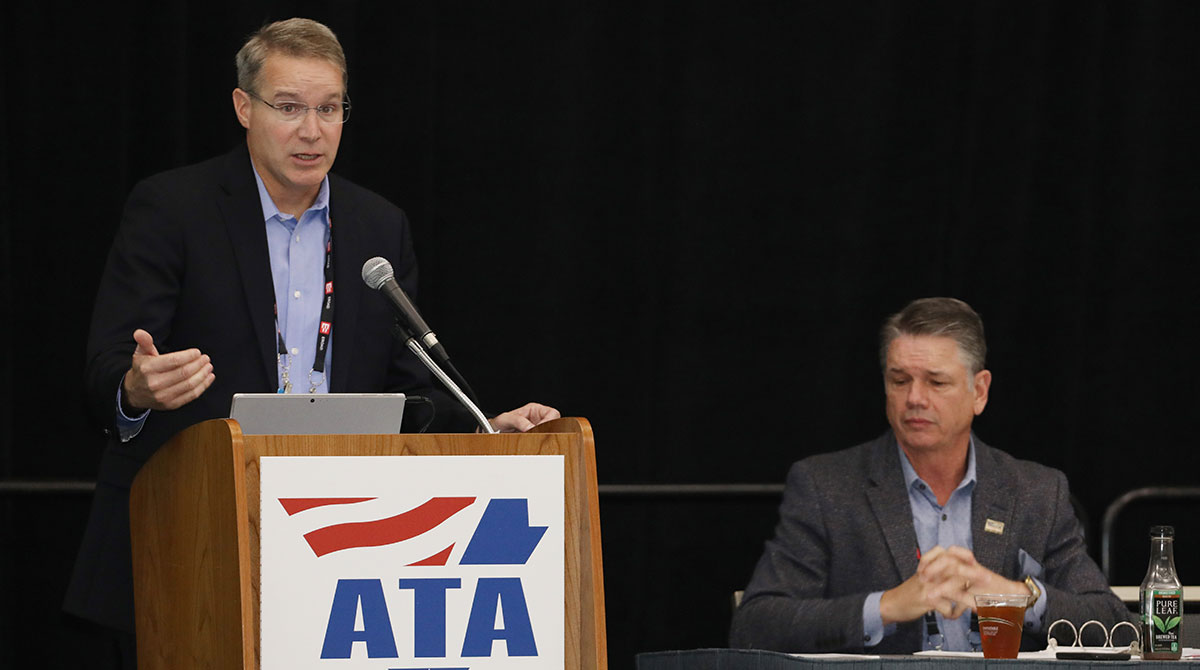 ATA President Chris Spear, shown with incoming Chairman Randy Guillot (right) says, "We really need to turn up the volume on this [law] and let it be known that it is eroding choice." (John Sommers II for Transport Topics)

An issue that is vital to carriers in the state hosting this year’s American Trucking Associations Management Conference & Exhibition also is top-of-mind for the group’s president and CEO, Chris Spear.

In a recent interview with Transport Topics, Spear said that during this year’s industry gathering he will urge members — especially those in California — to ramp up efforts to fight legislation that was signed into law by Gov. Gavin Newsom on Sept. 18. The measure codifies into law a 2018 state Supreme Court decision that makes it easier for independent contractors to become reclassified as employees of motor carriers. It is the latest development in efforts by California lawmaker to reduce what they have called widespread misclassification of independent contractors.

The bill has been opposed by the California Trucking Association, which maintains the law would require many motor carriers to use an employee standard known as the “ABC test.” That standard, truckers have said, makes it difficult, if not impossible, to continue the use of independent contractors. The test uses a set of criteria to distinguish employees from independent contractors.

“The fact is, many in California choose the independent contractor model because they can actually be paid more,” Spear said. “Many choose the independent contractor ­model definition because they have other businesses on the side. We really need to turn up the volume on this and let it be known that it is eroding choice, freedom that people have to pick the occupation and the flexibility they desire, and it’s not going to be dic­tated by trial lawyers and union bosses.”

Spear added, “The ports seem to be the easiest target for those that are advocating a change in this definition. This is something that is a very concerted strategy by the plaintiffs’ bar in California and the unions,” Spear said.

Numerous policy discussions and educational sessions on ­issues such as this that are confronting the trucking industry are on the docket for MCE, which runs Oct. 5-9 at the San Diego Convention Center.