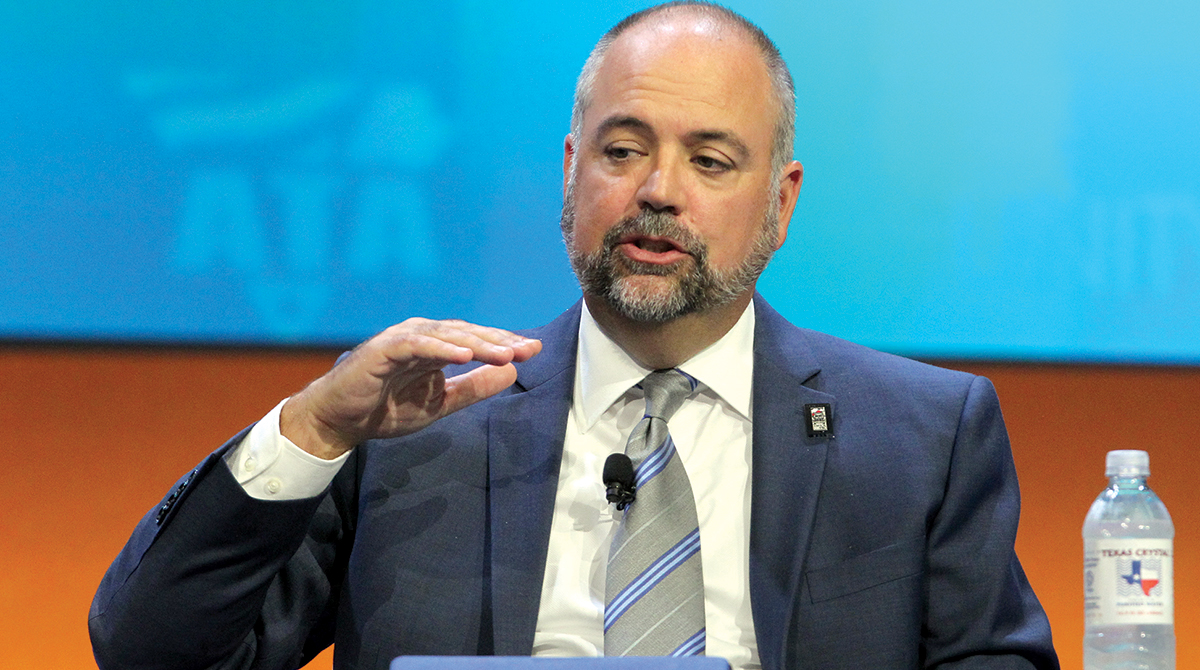 Bob Costello speaks at a past event. (John Sommers II for Transport Topics)

Three core economic sectors of trucking are showing strength, but disruption from the omicron variant of the coronavirus hangs over the industry as it heads into 2022, American Trucking Associations Chief Economist Bob Costello said.

Costello during a Nov. 30 webinar said the outlook for what he described as three “buckets” of freight — consumer spending, construction and manufacturing — remain strong for the near future. “The first bucket of freight is quite good,” he said. “The consumer is in good shape. The labor market is solid and people are spending money and that’s good for our industry.”

For construction, Costello said multiple indications suggest continued activity. “Generally, I like to look at single family housing starts,” he said. “I think demand for housing remains very high. Also, we are going to start to do more construction on the highway side and bridges and infrastructure in general with the new bipartisan infrastructure law, which was fantastic.”

Costello points to construction as a factor affecting the trucking industry. (sculpies/Getty Images)

“The third bucket of freight is the industrial side of the economy,” Costello added, noting that factory output in October reached its highest levels since January 2019 despite ongoing supply chain challenges. “This is trending in the right direction,” he said, adding, “The three buckets of freight for trucking are all solid and that’s good news for our industry.”

Still, Costello noted that he expects inflation to remain stubbornly high in the short-term, as the economy sits somewhat unbalanced between high demand for goods and a service sector that is still recovering.

“I do think that — in the near term — you are going to see an acceleration of inflation,” Costello said. “But I don’t know that it sticks around for too terribly long,” he said.

While the duration is unknown, Costello did warn that prices could creep into historic territory for growth.

“We were at 6.2% year over year,” in October, he said, pointing to the Consumer Price Index 12-month gain reported by the Bureau of Labor Statistics for the month. “I’m going to tell you right now, folks, it’s going to get worse in the near-term. This is going to go up even more.” In terms of historic growth, he noted that CPI growth previously reached 6.2% in the late 1960s, early 1970s and again in the early 1990s. “Right now we’re tied for the fourth-highest cycle in history,” Costello said, cautioning that in the coming months a year-over-year increase of more than 7% is possible.

He also noted uncertainty fueled by the omicron variant — and, potentially, future variants — could also present challenges for the economy.

“We now know we are dealing with a new [variant],” he said. “We don’t know what this is going to be like yet. But in the long run, I think we’re just going to be dealing with this sort of thing [as we] move through the next few years, and probably beyond.”

Costello added, “It is something we’re going to have to get used to, but it can still be sort of a punch in the gut.”

Costello noted that while the delta variant slowed third-quarter U.S. Gross Domestic Product, 2021 will finish the year at more than double the annual 2% rate of growth the economy saw in the 2010s.

To maintain a growth trajectory, however, trucking must address the ongoing driver shortage, he said, warning that the industry could see the number of drivers leaving increase over the next eight to 10 years.

If these trends persist, “We’re going to be over 150,000 short and we’ll be getting to that point of looking at a world of hurt,” he said.

Costello noted the shortage has worsened even as carriers continue to increase driver pay, a trend he asserts has “stopped the hemorrhaging.”

He noted the DRIVE Safe Act, a training program for younger drivers that was included in the recently signed $1 trillion infrastructure bill, is a step in the right direction.

“It’s more of an apprenticeship program,” Costello said, noting that the initiative’s rolling enrollment of 3,000 participants cannot fully address the total shortage. But, he added, “We think it’s going to be a good thing.”