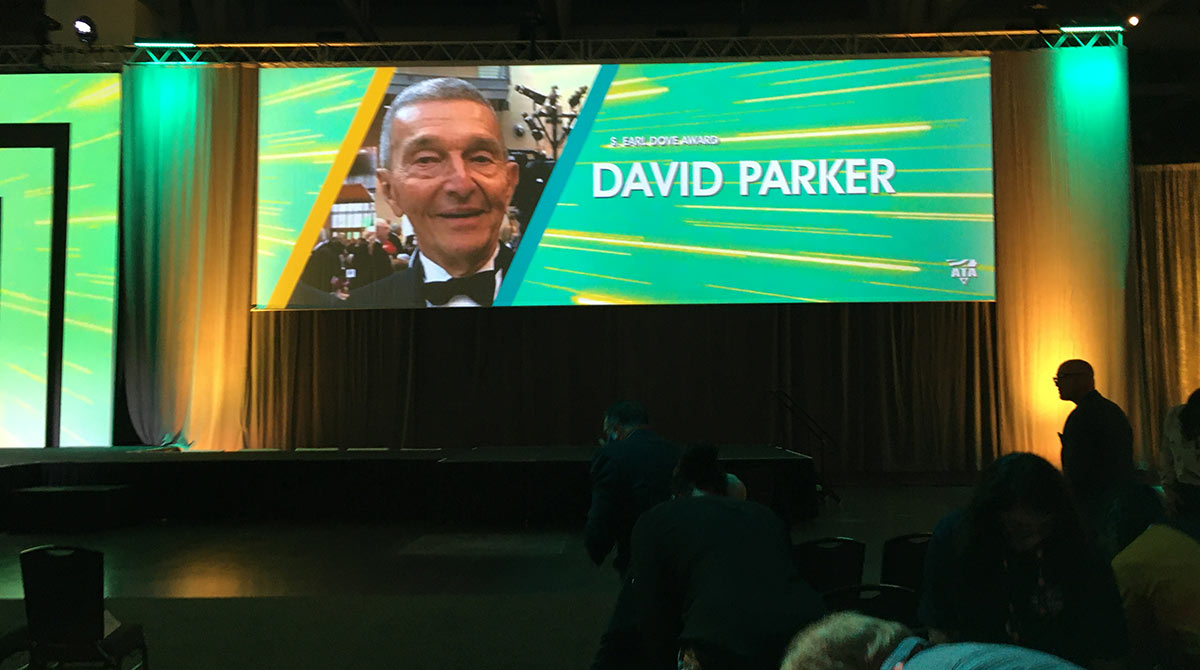 Parker had been a longtime contributor to the industry, last serving as senior legal counsel for Great West Casualty Co. and Great West Risk Management.

The award recognizes individuals whose contributions of time, energy and intelligence have advanced the interests of the trucking industry and the ATA federation. It is named for the former ATA chairman and former owner of AAA Cooper Transportation.

Parker had been a mentor to Meisgeier early in his career.

A longtime trucking executive and attorney who focused much of his legal career on helping the trucking industry, Parker also served in the U.S. Marines.

He died last year from cancer at age 80.

Meisgeier said that Parker will be remembered as a man who advised many people both as a friend and as a professional. Parker, he noted, had a strong work ethic and his peers enjoyed working with him. He was known for his willingness to share his knowledge and experiences.

“He was well-respected for his analytical ability, his measured approach to complex issues and his willingness to act when there was a problem to be solved,” said Meisgeier.

Parker had been married to his wife, Nancy, for 57 years. She was unable to attend the ceremony but asked family friend Steve Ponder, executive vice president of Great West Casualty Co., to accept the award on her behalf.

“Dave would be honored and humbled to be receiving this award,” Ponder said while reading a letter from Nancy. “It would mean the world to him. Dave was part of the transportation industry his entire professional career. He never quit working. The trucking industry was family to the two of us.”

Other presentations from ATA recognized state trucking association executives with its service awards for every five years in their respective associations.

“These state executives, along with so many of their colleagues in the audience today, work every day in their state capitals and localities to preserve and promote the greater interest of our industry,” said Paul Enos, president of the Nevada Trucking Association and chairman of the ATA Trucking Association Executives Council. “Unlike at the federal level, state legislative initiatives actually move very swiftly and without warning. This fast-paced environment presents many unique challenges.”

In all, there were 10 executives with a combined 135 years of experience:

Enos said Dave Huneryager, president and CEO of the Tennessee Trucking Association since 2004, is planning to retire at the end of this year; and that Rau plans to step down in March.

“So this is going to be their last MCE. Both will surely be missed and we wish them the best in their retirement.”

Introducing @AmericaRoadTeam… what a crew! Our professional drivers are American heroes.

Thank you @VolvoTrucksNA for your longtime support of our Road Team Captains, enabling them to educate the public and policymakers across the country about our industry. #ATAmce21 pic.twitter.com/zRRAyelJDX — American Trucking (@TRUCKINGdotORG) October 25, 2021

Also recognized during the ceremony was America’s Road Team for its work promoting safety. The team of professional drivers represents the industry by working to reinforce its commitment to safety, sustainability and professionalism.