Lauren Schapker recently was tapped to play a key role in the American Road and Transportation Builders Association’s efforts to advance its national agenda.

As vice president for legislative affairs, Schapker will be tasked to advocate for ARTBA’s concerns, such as prompting lawmakers to approve a sustainable source of revenue for the Highway Trust Fund. The account relies on dwindling revenue from the federal fuel tax. 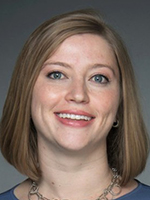 ARTBA is among several infrastructure stakeholders advocating for an increase to the fuel tax. It recently launched an online campaign to promote federal action. The federal rate of 24.4 cents-per-gallon diesel tax and 18.4 cents-per-gallon gas tax was set in 1993. The congressional tax-writing committees have not scheduled legislative hearings to address the account’s looming shortfall anticipated to occur in a couple of years.

Before ARTBA, Schapker led the Washington office of the National Ground Water Association, where she advocated for projects relevant to the group’s interests.

She had been with the Portland Cement Association for five years. According to background ARTBA provided, “She oversaw PCA’s grassroots and political efforts, both of which grew significantly under her leadership.”

She earned degrees from Miami University in Ohio.