Amid an Export Boom, the US Is Still Importing Natural Gas 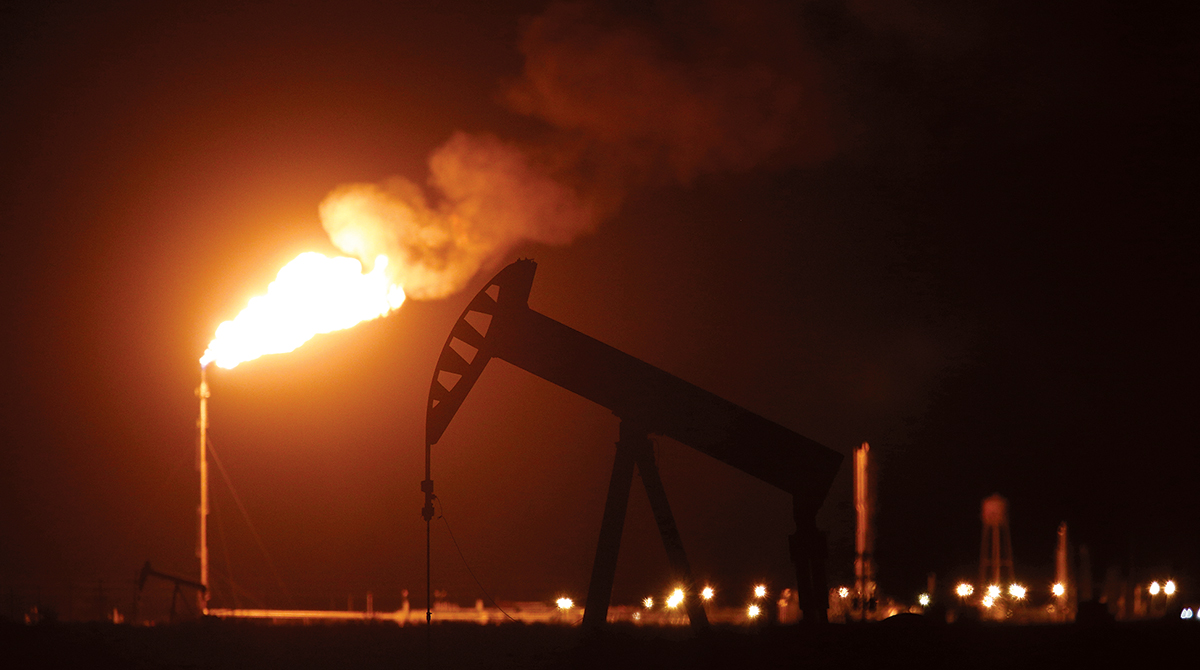 An electric oil pump jack is seen near a flare at night in an oil field in Texas. (Luke Sharrett/Bloomberg News)

The U.S. may be exporting natural gas at a record clip, but that hasn’t stopped it from accepting new imports. A tanker with fuel from Nigeria is sitting near the Cove Point import terminal in Maryland, while a second ship with Russian gas is idling outside Boston Harbor.

Pipeline constraints, depleted stockpiles and a 98-year-old law barring foreign ships from moving goods between U.S. ports is opening the way for liquefied natural gas to be shipped from overseas with prices expected to spike as the East Coast winter sets in.

The two tankers are carrying about 6 billion cubic feet of LNG, enough to power 150,000 homes for a year. At one point Dec. 27, the ship carrying Nigerian fuel to Cove Point passed another tanker in the Chesapeake Bay filled with U.S. gas that was headed abroad.

“It is ironic,’” said John Kilduff, a partner at Again Capital LLC in New York. But the “super cheap gas” produced in the nation’s shale fields “is trapped down west of the Mississippi unable to serve its own market,” he said by phone. “The gas is where the people aren’t.”

As usual, it’s all about the money. The companies shipping the gas into Maryland — BP Plc and Royal Dutch Shell Plc — will likely have it stored until freezing East Coast temperatures push prices higher as local suppliers struggle to meet demand, according to Trevor Sikorski, head of natural gas, coal and carbon with the London-based industry consultant Energy Aspects Ltd. in a note to clients on Dec. 27. 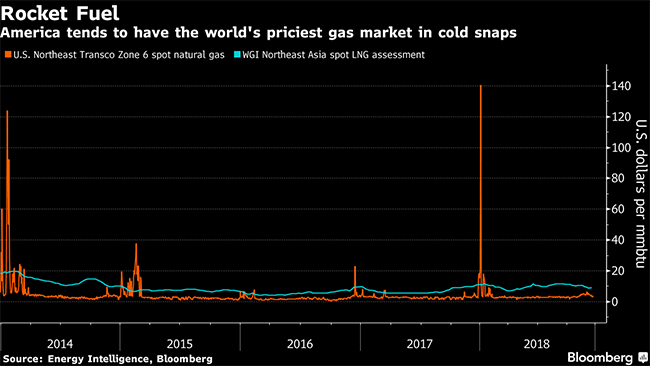 Other factors are at play as well. For instance, American providers can’t just ship LNG from shale fields in the south because the giant ships that transport the super-chilled fuel sail under foreign flags. Under the 1920 Jones Act, that means none can legally transport LNG to the Northeast from existing export terminals in Louisiana and Texas.

At the same time, even the vast pipeline network feeding the region can quickly develop bottlenecks at a time when stockpiles are sitting at their lowest levels for this time of year since 2002. While production is soaring, strong demand from more and more U.S. power plants using the fuel, along with new export terminals, soaks up much of that new supply.

“There’s still some logistics and pipelines that need to be built to match out to where the demand is,” Kilduff said.

While Boston Harbor sees regular LNG traffic from Trinidad, the imports at the Cove Point terminal in Maryland are “a less expected development,” Sikorski said in the Energy Aspects note.

The Northeast’s appetite for LNG imports “is an outlier in a global market that has seen a very soft” fourth quarter for demand, he said.

Further north, a tanker named Exemplar has been loitering just outside Boston harbor after picking up a cargo from France’s Montoir-de-Bretagne terminal two weeks ago, according to ship tracking data. That ship’s LNG originated from the Yamal LNG facility in Russia, according to Madeleine Overgaard, a market analyst for Kpler.

The fuel was initially supposed to be delivered to Canada on Dec. 21, Overgaard wrote in an email. Instead, Exemplar turned and was repositioned outside of Boston. It remains unclear where the cargo will end up.

Carol Churchill, a spokeswoman for Exelon Corp., which runs the Everett import terminal near Boston, said on Dec. 28 that the ship “is not coming into Everett. All of the LNG that we have contracted for is coming from Trinidad,” she said.