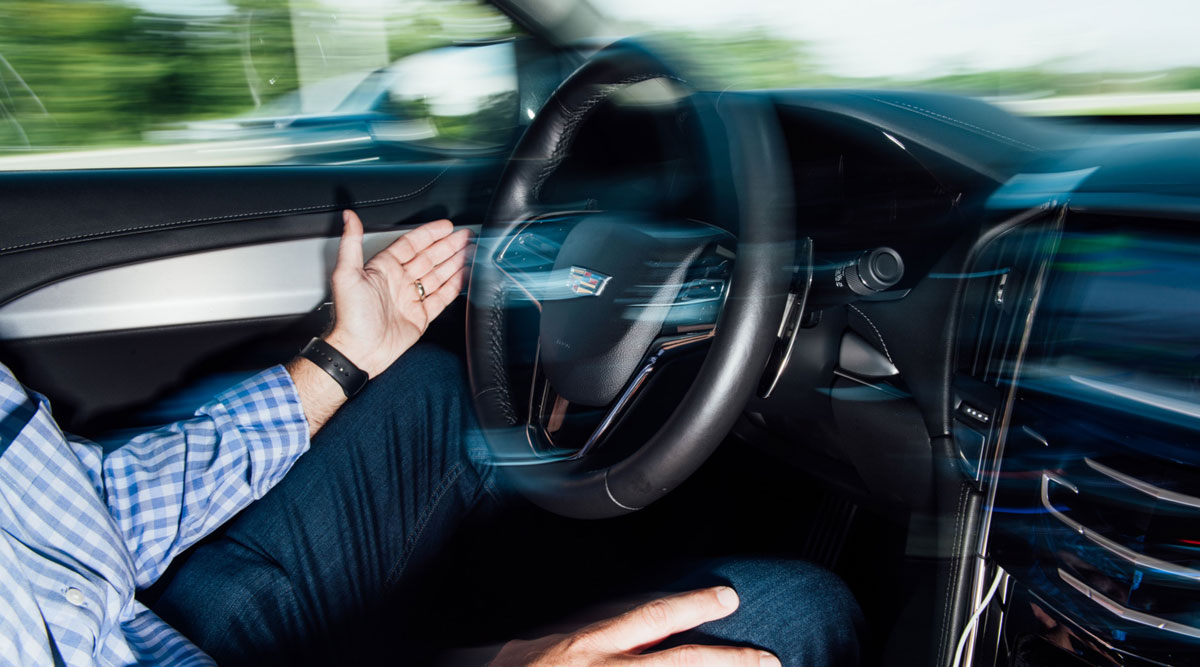 A driver demonstrates a semi-autonomous vehicle in Michigan in 2017. (Graham Walzer/Bloomberg News)

Nearly half of Americans say they would not get in a self-driving taxi, according to a poll commissioned by the advocacy group Partners for Automated Vehicle Education. The poll, conducted online in February and March by SurveyUSA, found widespread skepticism and confusion about autonomous vehicles.

Of the 1,200 adults surveyed, 48% said they would “never get in a taxi or ride-share vehicle that was being driven autonomously,” while 21% said they were unsure about it. A fifth of respondents said that AVs would never be safe, and another fifth stated incorrectly that it is possible “to own a completely driverless vehicle today.”

“Americans have a lack of trust and a lack of knowledge about AVs,” said PAVE executive director Tara Andringa.

A coalition of autonomous vehicle developers and road safety groups, PAVE was founded in 2019 with the goal of informing the pubic about self-driving cars. Its members include Waymo, Cruise, and Argo — three of the leaders on Hyperdrive’s recently published Self-Driving Scorecard — as well as the National Safety Council, Mothers Against Drunk Driving and the National Federation of the Blind.

COVID-19 has been a wakeup call to many businesses. Knowing the location and status of freight makes all the difference in navigating uncertainty. Host Seth Clevenger speaks with supply chain visibility experts Glenn Koepke and Francis Roy. Hear a snippet, above, and get the full program by going to RoadSigns.TTNews.com.

The latest survey results echo previous polls that suggest a potential problem regarding consumer acceptance of self-driving cars. “Companies are putting huge investment into the development of AVs, but public opinion polls like this one show great skepticism, concern and distrust,” said Andringa. “The point of PAVE is to help bridge that gap.”

This is the first time that PAVE has surveyed public sentiment around AVs. The group plans to use the poll as a baseline to measure changes in sentiment and to help judge the efficacy of its education campaign, which includes holding driverless car demonstrations for the general public.

The poll results, said Andringa, bolster her belief that giving people access to the technology is the best way to change opinions. Sixty percent of those surveyed said they would have greater trust in AVs if they knew more about how the technology works.

Oliver Cameron, CEO of Voyage, a self-driving car startup and PAVE member, said the poll conforms with his experience providing autonomous rides to residents in private retirement communities in Florida and California.

“We’ve had a few residents who are excited, and they don’t really care about the fact it’s a self-driving car because they saw the birth of flight,” Cameron said.

But for many others, he said, the first ride is like being on a roller coaster. There’s fear, followed by relief.

“It’s like ‘Oh, that wasn’t so bad,’” Cameron said. “I think that is going to be most Americans’ experience. It will be an exciting technology — maybe even a scary technology—until you try it. And then it will just become normal.”

Perhaps surprisingly, drivers who said they were aware of bad publicity around automated driving — including the case of the Uber self-driving car that killed a pedestrian in Arizona in 2018 and crashes involving Tesla’s Autopilot — were more likely to say AVs are safe.

Drivers who reported having advanced-driver assistance systems, or ADAS, on their own cars were also more likely to be optimistic about self-driving cars. Seventy-three percent of drivers with a forward collision alert system on their own cars, for instance, said that safe AVs would be available within 10 years, compared to 58% of those without.

Yet drivers who say they own vehicles with ADAS are also more likely to be mistaken about the availability of completely driverless vehicles; 59% of drivers who reported having a remote parking system, for instance, mistakenly stated that they can buy a self-driving car today.

“The way that some companies advertise their current products leads people to believe that cars are capable of more than they are,” said Andringa.