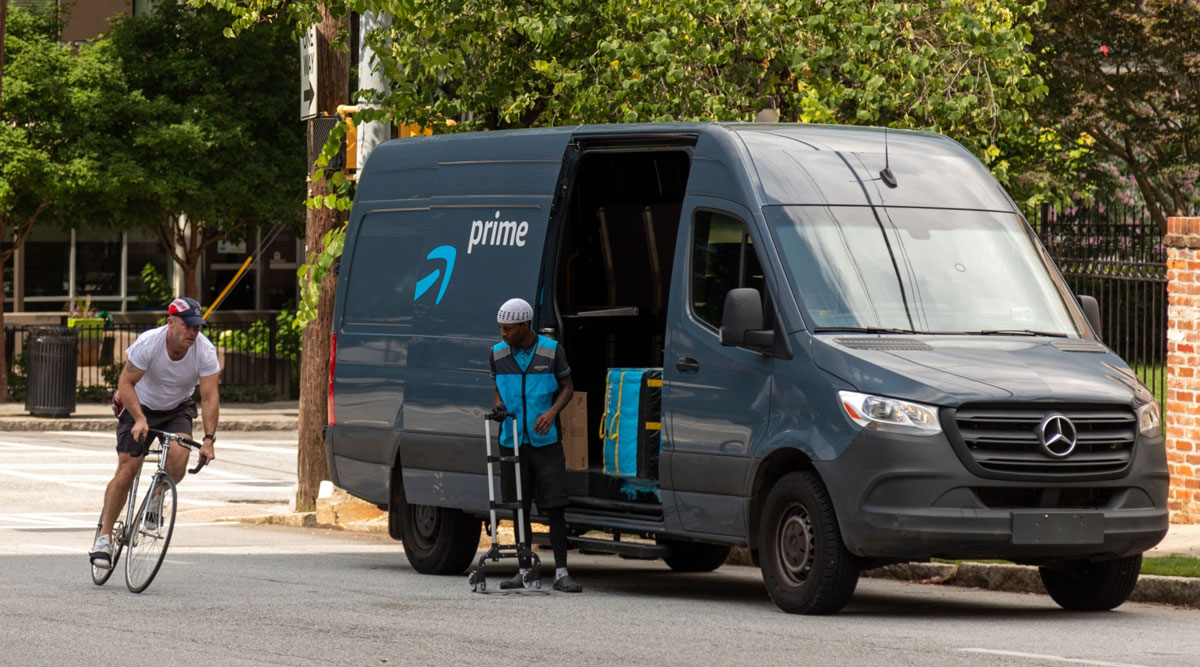 A pedestrian rides a bike past an Amazon Prime delivery van in Atlanta on July 21. (Lynsey Weatherspoon/Bloomberg News)

Amazon.com Inc. is buying 1,800 electric delivery vans from Daimler AG’s Mercedes-Benz, the retailer’s biggest commitment to date to cut the carbon footprint of its delivery operations in Europe.

The deal, for the German automaker’s eSprinter and eVito models, will be complete by the end of the year, Amazon said in a statement Aug. 28. It comes two years after Amazon agreed to buy 20,000 conventionally fueled Mercedes Sprinter vans to help build its package delivery operations in the U.S.

Amazon, which is increasingly delivering shipments with its own staff or contractors instead of relying on major carriers, last year announced a deal to buy 100,000 custom-built electric vans made by Rivian Automotive Inc. The electric truck startup expects to start production next year and complete the order by 2030. The Mercedes purchase makes it clear Amazon also will seek vehicles from other automakers to remove planet-warming greenhouse gases from its delivery fleet.

Electric vehicles are a major piece of Amazon’s effort to become a net zero emitter of carbon by 2040, an ambitious goal for a company that historically had lagged behind its retail and technology peers on the environment. As part of that initiative, Amazon CEO Jeff Bezos in September announced the Climate Pledge, an open invitation for other companies to match Amazon’s commitment and track and report their own emissions.

As part of the Aug. 28 announcement, Mercedes became the fourth signatory to the pledge, joining three initial signers from earlier this year.

It’s unclear whether Mercedes, which had previously announced plans to make its passenger fleet carbon neutral by 2039, has agreed to any new environmental commitments as part of its participation in Amazon’s climate pact. Daimler has been reporting its carbon emissions to the public and global tracking organizations since at least 2010, according to data from CDP, formerly the Carbon Disclosure Project. Amazon disclosed its carbon footprint for the first time last year but hasn’t submitted data to CDP’s closely watched public tracker.

An Amazon spokesman said the Climate Pledge commitment was made by the Mercedes subsidiary, not Daimler as a whole, which also owns American truck manufacturers Freightliner and Western Star. A Daimler spokesman said that by having the unit sign the Climate Pledge, the company is reinforcing its commitments and is “excited to join a community that will share knowledge, ideas and best practices.”