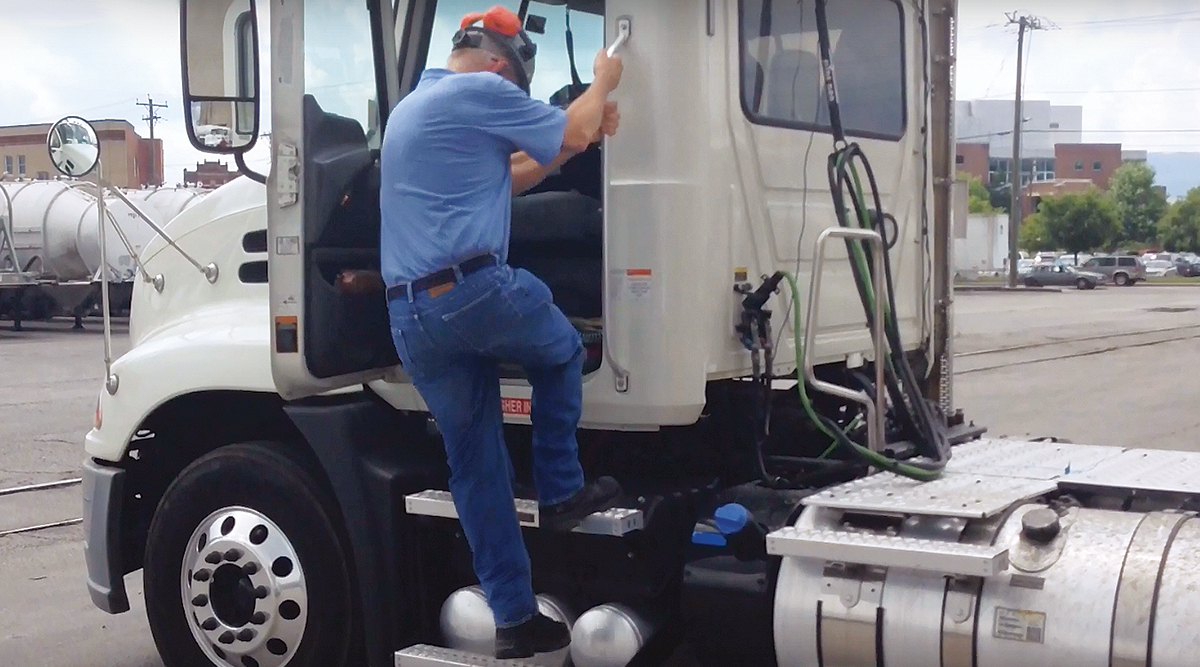 A trucker exits his cab. Getting in and out of a truck is one of many ways a driver can get injured on the job. (Quincy Smith via YouTube)

“Whether it is getting in and out of the truck not using ‘three points of contact,’ working on top of trailers or being exposed to wet and slippery conditions, there are many exposures of this type for drivers,” said Chris Mikolay, vice president, national accounts and truck alternative risk for National Interstate Insurance Co., which offers workers’ compensation and commercial auto liability insurance for the industry.

Broadly defined, workers’ compensation insurance provides coverage for medical expenses and lost wages to a company’s employees who are injured on the job.

Common injuries that can lead to workers’ compensation claims include those from slipping and falling while getting in or out of the truck cab or the back of the trailer, as well as those from cranking the landing gear, pulling a fifth wheel pin from an “awkward position” to uncouple the trailer and loading and unloading the truck, said Stephen Kane, president of Rolling Strong, which offers technology-based health and wellness services to motor carriers.

James Burg, president of James Burg Trucking Co., a 90-truck fleet based in Warren, Mich., said that now, “people that just climb steps are having injuries that aren’t related to the job, but more related to their bodies, but we’re still being tagged with those claims.”

Burg, who is chairman of the insurance task force at American Trucking Associations, said the rising age of the workforce is a contributing factor, noting that a 30-year-old who loses footing on the job might catch him or herself — “That wouldn’t be an injury,” he said — while an older worker in the same circumstance might get hurt. At 55, “that same stumble would now tear a meniscus,” Burg said, adding that until a few years ago, he didn’t know what a meniscus — cartilage in the knee — even was.

Kane noted that drivers’ tendons and the ligaments around their joints can get tight because of the sedentary nature of their work. They can also get dehydrated if they’re drinking more coffee and energy drinks than water.

“The combination of these things makes drivers susceptible to injury, specifically to the shoulders, lower back and hips,” said Kane, whose company offers workouts designed for truck drivers.

He added that drivers are twice as likely to get injured on the job as compared to the general worker, “and it typically takes them almost twice as long to get back to work.”

As to the impact of medical costs, Tim Horgan, director of marketing at Hub International, an insurance broker, said in 2012, an injured shoulder claim was settled for about $25,000 but today, that figure is $100,000 or higher. 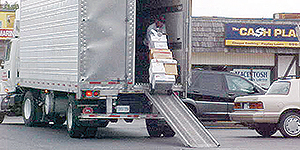 Loading and unloading a truck is another common way truck drivers can get injured. (truckdriversafety.ca)

But there’s some good news for motor carriers regarding the cost of insuring against those claims.

“Workers’ compensation premiums have been a bright spot in an otherwise increasingly troublesome insurance market for motor carriers,” said National Interstate’s Mikolay. That’s a departure from commercial auto liability premiums, which he said, “have been rising rapidly, particularly for fleets with below average safety cultures, in tougher venues or with above average loss frequency.”

Mikolay added, “Thankfully, workers’ compensation costs have not followed this trend, and in fact, many motor carriers are seeing their workers compensation premiums remain stable, and for some, their costs have actually been decreasing.”

But fleets don’t have to wait for government reform to manage risk; they can take ownership through initiatives such as driver training.

“Educating drivers with various videos on how to safely get in and out of the truck or how to safely get on the back of a flatbed” can help, said Jerry Gillikin, chief marketing officer at Hub International. He said more of the company’s clients are doing online training, something that’s especially important for flatbed drivers, who have an increased level of risk because they are “tarping, chaining and getting up on the truck.”

Someone who's a triathlete is probably not going to be a truck driver.

One of the biggest workers’ compensation exposures, however, is from motor vehicle accidents — some of the costliest claims result from crashes, so some fleets are using technology to help reduce the frequency of claims, Mikolay said, citing in-cab camera systems that record both externally and internally, as well as lane-departure and collision-avoidance systems. Sam Tucker, CEO of Carrier Risk Solutions, an Atlanta-based company that provides safety and compliance services to motor carriers, stressed the importance of cameras. One of his customers, which has 13 over-the-road trucks, caught a safety issue with its drivers last year after installing cameras in the cabs of the trucks, he said.

“We then started getting the data back and noticed they had a safety belt problem with the drivers, and we previously had no idea,” Tucker said.

But an industry that is battling a shortage of drivers cannot always be picky, said Andrew Ladebauche, CEO of insurance broker Reliance Partners. Carriers must be somewhat flexible during the pre-employment screening process because it’s “tough to get drivers right now,” he said, adding, “someone who’s a triathlete is probably not going to be a truck driver.”

Shift in Eating Habits, Exercise and Attitude Pays Off for Overweight Driver