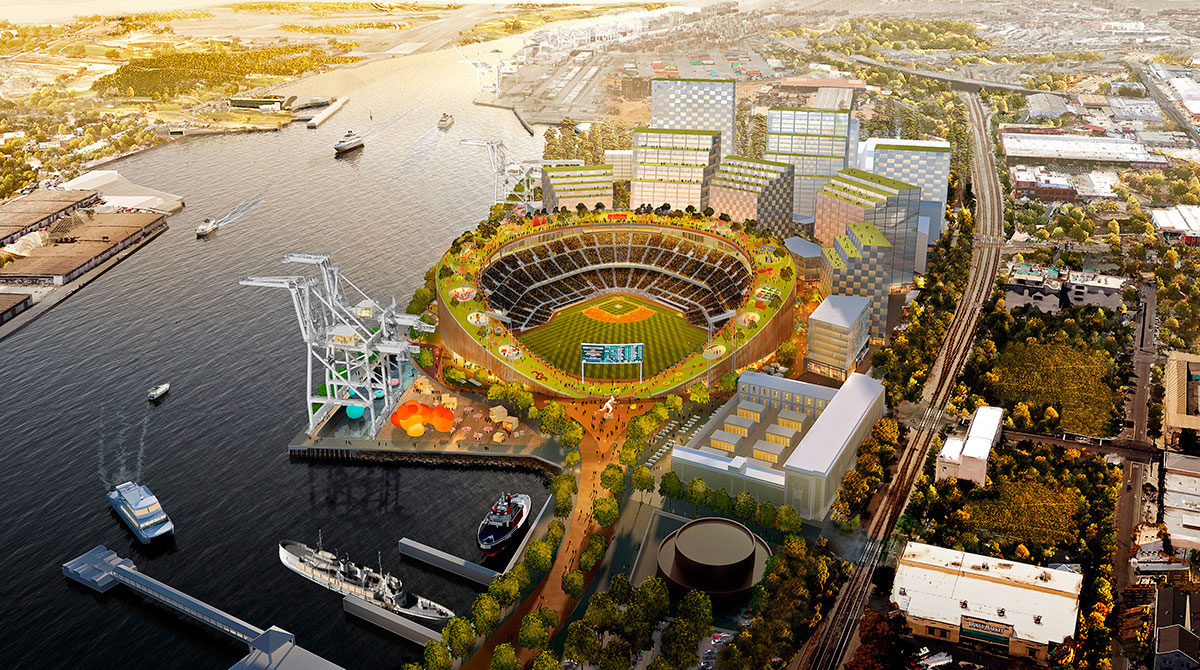 Artist's rendering of a skyline view of the proposed ballpark at Howard Terminal near Jack London Square in Oakland. (Bjarke Ingels Group/Oakland Athletics via AP)

SAN FRANCISCO — A California agency on June 30 cleared the way for the Oakland Athletics to continue planning a $12 billion waterfront ballpark project.

The San Francisco Bay Conservation and Development Commission voted 23-2 to reclassify a 56-acre terminal at the Port of Oakland as a mixed-use area where a new ballpark could be built. The vote is the first in a series of legal hurdles the team would have to overcome before it gets permission to break ground for the project.

The commission followed the recommendation of its staff, which found the team demonstrated removing the terminal from port use “would not detract from the region’s capability to handle the projected growth in cargo.” 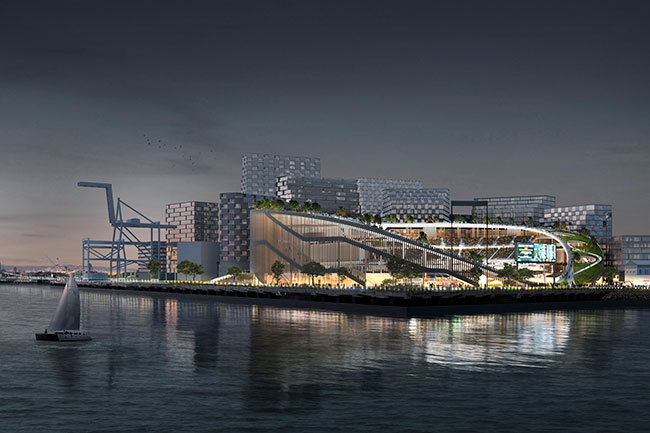 Artist's rendering of a water view of the proposed ballpark at Howard Terminal. (Bjarke Ingels Group/Oakland Athletics via AP)

The A’s are the last professional franchise remaining in Oakland after the NBA’s Golden State Warriors relocated to San Francisco and the NFL’s Raiders to Las Vegas in recent years. The defections weigh heavily on the Bay Area city of roughly 400,000 people, some of whom pleaded with the commission June 30 to work harder to keep the team and the accompanying jobs.

Oakland Mayor Libby Schaaf said the approval moved the city closer to bringing “this bold vision into a beautiful reality and keep our A’s rooted in Oakland for generations to come.”

“Our city has historically been overlooked for major economic development, but today that story about Oakland changes,” she said in a statement.

The two commissioners and members of the public who opposed no longer classifying Howard Terminal for port priority questioned whether the Port of Oakland would have the room needed to expand as shipping traffic grows if a massive real estate development were in its midst.

Erin Wright, a third-generation longshoreman and member of ILWU Local 10, said the maritime community opposes the project because it would interfere with the shipping and receiving of cargo.

“Everyone with a working brain knows that the building of houses in an industrial zone is going to have a huge negative impact on all operations and lead to a downturn and degradation of our seaports,” he said.

“Our port is busier than it’s been in my 33 years. We need (Howard Terminal) for operations. We are using it, we have been using it every day,” he added.

The A’s proposal includes a $1 billion privately financed 35,000-seat waterfront ballpark at Howard Terminal, which is currently being used as overflow parking for containers and trucks. The project also would include 3,000 residential units, office and retail space, hotel rooms and an indoor performance center.

The team’s lease at the aging RingCentral Coliseum runs through 2024. The league has said rebuilding at the current location is not a viable option. In May, Major League Baseball instructed Oakland’s brass to explore relocation options if no ballpark agreement could be reached.

— Ken Ritter in Las Vegas contributed to this report.