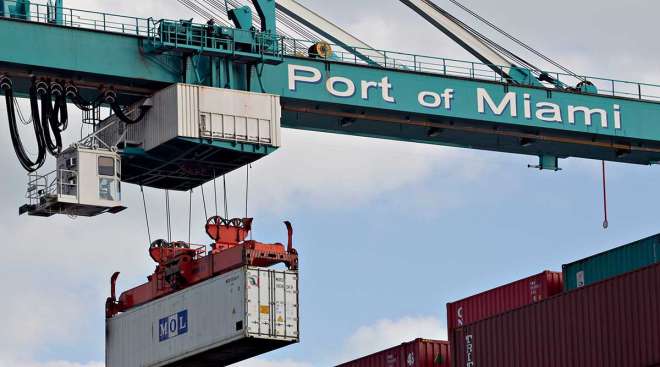 The dollar volume of trade through the Miami Customs District slid for the fourth straight year in 2016, but there are indications that the long decline may be over.

Total trade in the Miami district, which includes South Florida airports and seaports, fell 2.21% to $104.5 billion, according to an analysis of U.S. Census Bureau Data by WorldCity. Exports dropped 4.23% to $56.1 billion and imports dropped marginally to $48.4 billion.

The last time the Miami district shattered records was 2012, when local airports and seaports handled $124.6 billion worth of exports and imports.

But during a luncheon May 5 marking World Trade Month, Ken Roberts, president of Coral Gables media and data research company WorldCity, said trade through South Florida is “back on a good footing,” and it appears that the “big slide” in total trade will end this year.

RELATED: Plan to ease South Florida cargo congestion back on the table

Historically, South Florida has served as the shopping cart for Latin America and the Caribbean. But economic problems in key markets and lower commodity prices resulted in a loss of $21.05 billion in trade with just five nations — Brazil, Colombia, Costa Rica, Venezuela and Switzerland — that have been top trading partners.

WorldCity brought together the directors of PortMiami, Port Everglades and Miami International Airport to discuss trade at its annual World Trade Month luncheon, which was held at the Coral Gables Country Club. More than 200 people attended.

PortMiami Director Juan Kuryla said he was optimistic that as the world’s top shipping lines reorganize themselves into new alliances, larger ships will come to PortMiami. The port has deepened its main channels to accommodate the larger ships that now transit the expanded Panama Canal and is averaging about 10 ships a month that wouldn’t have been able to enter the port without the dredging project.

Port Everglades also is focusing on plans to deepen and widen major channels. “It’s about us getting ahead of the curve in infrastructure development. We see the ships getting larger,” said Steven Cernak, chief executive and director of Port Everglades. The port plans to spend $800 million on capital improvements over the next five years.

Emilio Gonzalez, director of Miami International Airport, said innovation, technology and pursuit of non-traditional business is helping cargo grow at the airport. In 2015, MIA became the only airport in the country to be designated a Pharma Hub Airport, which assures pharmaceutical manufacturers that their products will be transported in accordance with best global practices.

The two seaport directors conceded that they often compete for the same shipping lines and services, but Cernak said whatever the outcome is, “it benefits South Florida.”

A piece of good news for PortMiami this week came at the expense of Port Everglades. Miami-Dade Mayor Carlos Gimenez announced that Hapag Lloyd’s Mediterranean Gulf Express service would be returning to the port on June 11.

The Germany-based line had dropped its Mediterranean service to Miami last August and added Port Everglades as a port of call. The new MGX service, which won’t call at Port Everglades, will allow transit times of 15 days from Livorno, Italy, for example, and 11 days from Valencia, Spain.