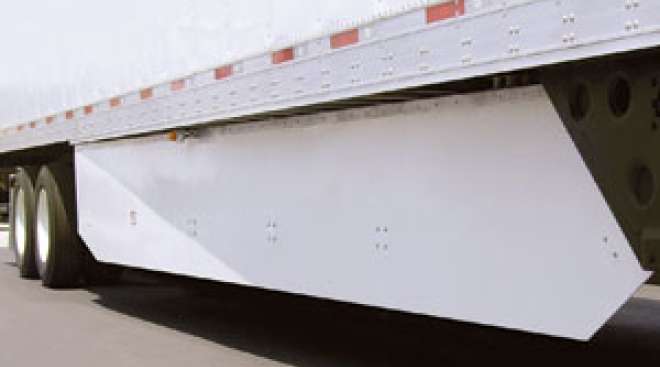 Fleets have ramped up their investments in trailer aerodynamics systems in recent years to improve fuel economy, and federal regulations are expected to drive further adoption, a new report found.

Today, approximately a fourth of all dry van and refrigerated trailers on the road in the United States have at least one aerodynamic technology installed, according to a new report from Trucking Efficiency, a joint effort between the North American Council for Freight Efficiency and Carbon War Room aimed at boosting freight efficiency.

The report also said prices for trailer aerodynamic technologies — particularly side skirts — have decreased significantly due to a greater competition among suppliers, higher sales volumes leading to lower costs and increased availability of devices directly from trailer manufacturers.

In fact, more than 30% of new trailers are being equipped with trailer aerodynamic devices, the report found.

“Fleets have moved from asking why they need aerodynamic devices on their trailers to determining when and how they will add them,” said Mike Roeth, NACFE’s executive director.

Regulations such as the federal government’s proposed Phase 2 greenhouse-gas emissions standards are expected to spur further growth in the deployment of aerodynamic systems. That proposal, issued in June by the Environmental Protection Agency and the National Highway Traffic Safety Administration, would introduce the first federal trailer efficiency standards starting in 2018.

The Trucking Efficiency report also noted a “clear prioritization” on which areas of the trailer the industry is addressing through aerodynamics.

Other aerodynamic systems include products to address the gap between the tractor and trailer, wheel covers, mud flaps and vortex generators.

Trucking Efficiency said it is “highly confident that all fleets should be considering the aerodynamics of their trailers, and the adoption of devices which will improve those aerodynamics, as a major opportunity to save fuel.”

The best package of systems to adopt depends on a fleet’s unique duty cycle, the report said, but up to about 10% improvement in fuel economy is available to the majority of fleets running 53-foot dry box trailers.

One key challenge preventing further adoption of trailer aerodynamics is the perceived complexity of testing and comparing device performance.

“The net benefits from the package of devices will not simply equal the sum of the benefit of each individual device, making it difficult for fleets to prioritize investment decisions and feel confident on their paybacks,” the report said.

To address this issue, Trucking Efficiency recommended that fleets and aerodynamics suppliers work to improve communication on device performance. The report also calls for development efforts to further improve the return on investment for these systems.