33 Million Have Sought US Unemployment Aid Since Virus Hit 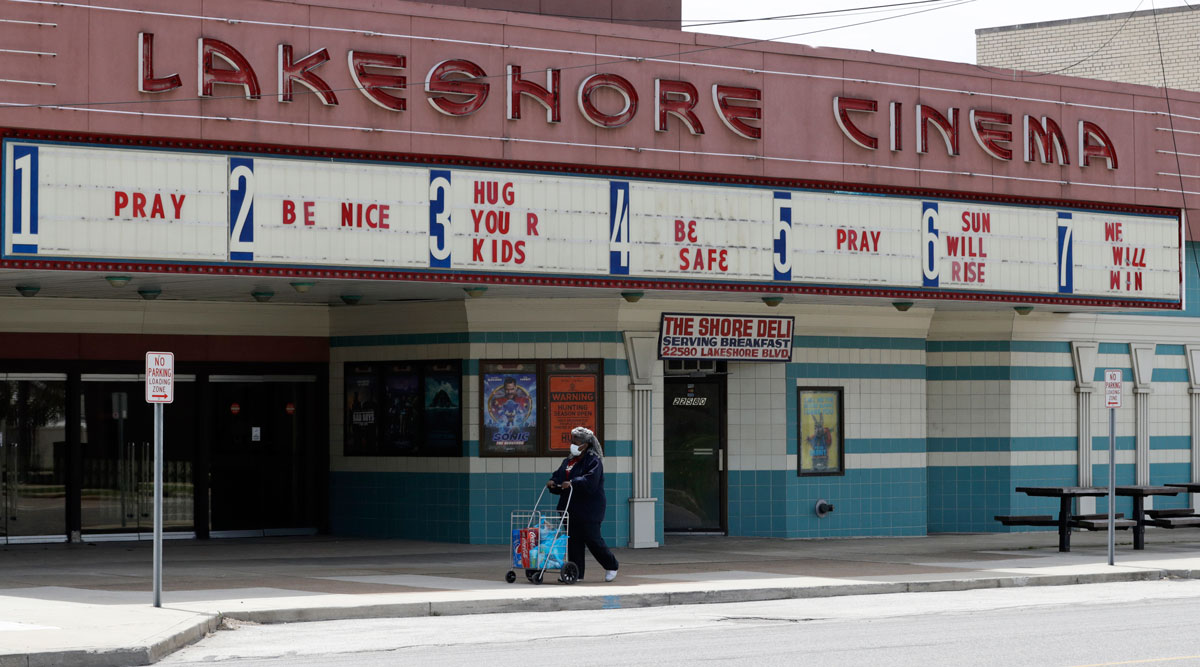 A woman wearing a mask walks with her groceries past a closed theater in Euclid, Ohio, on May 6. (Tony Dejak/Associated Press)

An estimated 33.5 million people have filed for jobless aid in the seven weeks since the coronavirus began forcing millions of companies to close their doors and slash their workforces. That is the equivalent of one in five Americans who had been employed in February, when the unemployment rate had reached a 50-year low of just 3.5%.

The Labor Department’s report May 7 suggests that layoffs, while still high, are steadily declining after sharp spikes in late March and early April. Initial claims for unemployment aid have fallen for five straight weeks, from a peak of nearly 6.9 million during the week that ended March 28.

Applications for jobless aid rose in just six states last week, including Maine, New Jersey, and Oklahoma, and declined in the other 44.

The report showed that 22.7 million people are receiving unemployment aid — a rough measure of job losses since the shutdowns began. That figure lags by a week the figures for first-time unemployment applications. And not everyone who applies for jobless aid is approved. The number of laid-off workers receiving aid is equal to 15.5% of the workforce that is eligible for unemployment benefits.

Those figures are an estimated proxy for the job losses and for the unemployment rate that will be released May 8, which likely will be the worst since modern record-keeping began after World War II. Unemployment is forecast to reach 16%, the highest rate since the Great Depression, and economists estimate that 21 million jobs were lost last month. If so, it would mean that nearly all the job growth in the 11 years since the Great Recession ended has vanished in a single month.

Even those stunning figures won’t fully capture the magnitude of the damage the coronavirus has inflicted on the job market. Many people who are still employed have seen their hours reduced. Others have endured pay cuts. Some who lost jobs in April and didn’t look for a new one in light of their bleak prospects won’t even be counted as unemployed. A broader measure — the proportion of adults with jobs — could hit a record low.

The official figures for jobless claims also may be undercounting layoffs. Surveys by academic economists and think tanks suggest that as many as 12 million workers who were laid off by mid-April did not file for unemployment benefits by then, either because they couldn’t navigate their state’s overwhelmed systems or they felt too discouraged to try.

As the economy slides further into what looks like a severe recession, economists are projecting that the gross domestic product — the broadest gauge of economic growth — is contracting in the current April-June quarter by a 40% annual rate. As it does, more layoffs appear to be spreading beyond front-line industries such as restaurants, hotels and retail stores. 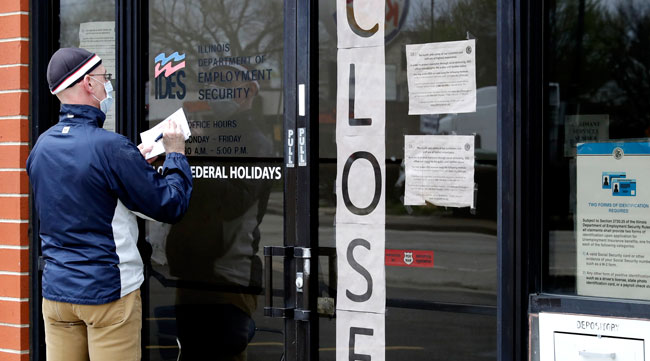 A man writes information in front of the Illinois Department of Employment Security in Chicago on April 30. (Nam Y. Huh/Associated Press)

GE Aviation, for example, has said it is cutting up to 13,000 jobs. Uber will shed 3,700 positions. MGM Resorts International has announced that the furloughs of more than 60,000 employees could turn into layoffs.

But the job cuts have hammered workers at restaurants, hotels and retail firms particularly hard. According to payroll processor ADP, about half the total jobs in the hotel and restaurant industry — 8.6 million — disappeared in April, based on data from its corporate clients. A category that includes retail and shipping shed 3.4 million workers.

As businesses across the country have shut down and laid off tens of millions, the economy has sunk into a near-paralysis. Even as some businesses are beginning to reopen in some states, factories, hotels, restaurants, resorts, sporting venues, movie theaters and many small businesses still are largely shuttered. Home sales are falling. Consumer confidence and spending are sinking.

The difference between the 30 million-plus unemployment claims that have been filed in the past several weeks and the expected April job loss of slightly more than 20 million reflects differences in how the figures are compiled.

The government calculates job losses by surveying businesses and households. It’s a net figure that also counts the hiring that some companies, such as Amazon and many grocery stores, have done. By contrast, the total jobless claims are a cumulative figure; they include applications for unemployment aid that began in mid-March.

In addition, the government conducts its surveys for the monthly jobs reports in the middle of each month. So layoffs from the final two weeks of April won’t show up in the May 8 jobs report. They will instead be included in the May jobs report to be released in early June.

After problems with state computer systems had slowed the distribution of federal benefits for many laid-off workers, all 50 states are now paying the $600 extra weekly benefit that the federal government included in a relief package enacted in late March. That represents a significant help to millions of laid-off workers, many of whom still remain anxious and uncertain.

Jamie Stewart is renting out a spare bedroom in her home to try to make ends meets after losing her job at a southwest Florida resort. Having applied for unemployment benefits in late March, she finally received her first payment of $1,200 this week. Stewart, a 37-year-old resident of Bonita Springs, works as a concierge in the off-season and as a shift manager and bartender in the resort’s restaurants.

After her layoff, she deferred her car payment for two months and canceled non-necessities such as Zoom, Pandora and Netflix. She recently signed up for food stamps, which cover about half her monthly grocery bill.

“My mental health has deteriorated to a point that I don’t recognize myself anymore,” she said. “My eyes are swollen and bloodshot all the time now from regular moments of weakness that leave me completely inconsolable.

“It looks like I have aged 10 years since the lockdown started.”