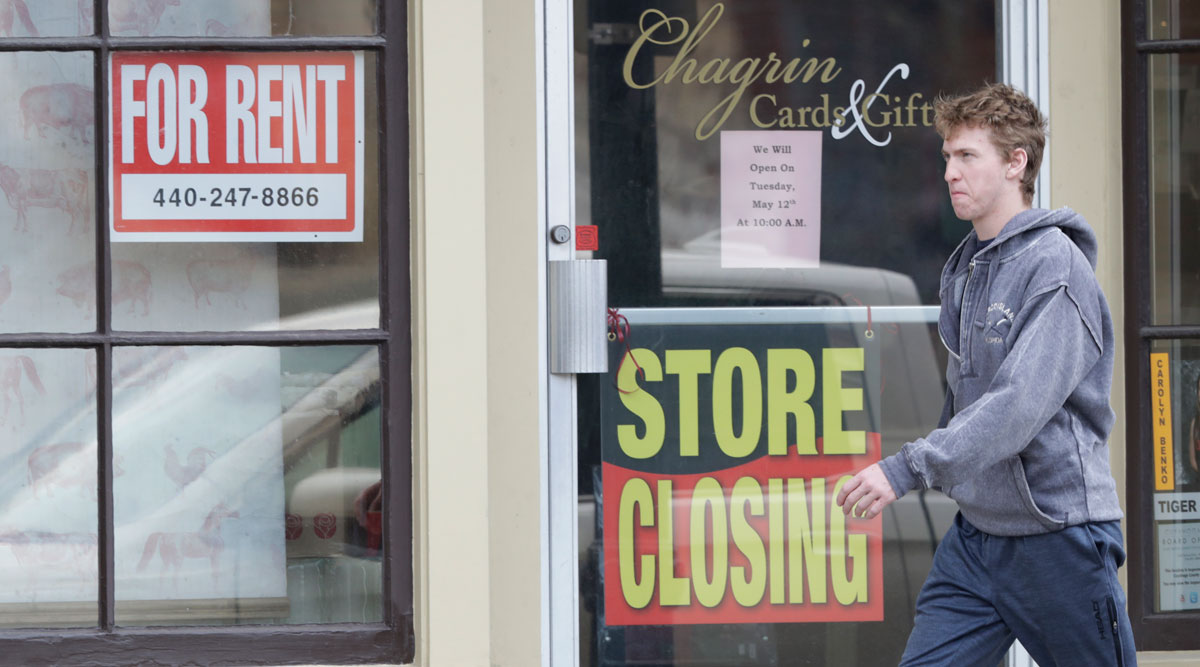 A man walks past a closed business in Chagrin Falls, Ohio, on April 29. (Tony Dejak/Associated Press)

WASHINGTON — More than 3.8 million laid-off workers applied for unemployment benefits last week as the U.S. economy slid further into a crisis that is becoming the most devastating since the 1930s.

Roughly 30.3 million people have now filed for jobless aid in the six weeks since the coronavirus outbreak began forcing millions of employers to close their doors and slash their workforces. That is more people than live in the New York and Chicago metropolitan areas combined, and it’s by far the worst string of layoffs on record. It adds up to more than one in six American workers.

With more employers cutting payrolls to save money, economists have forecast that the unemployment rate for April could go as high as 20%. That would be the highest rate since it reached 25% during the Great Depression.

This week, the government estimated that the economy shrank at a 4.8% annual rate in the first three months of this year, the sharpest quarterly drop since the 2008 financial crisis. Yet the picture is likely to grow far worse: The economy is expected to contract in the April-June quarter by as much as 40% at an annual rate. No previous quarter has been anywhere near as weak since the government began keeping such records after World War II.

As businesses across the country have shut down and laid off tens of millions of workers, the economy has sunk into a near-paralysis in just a few weeks. Factories, hotels, restaurants, department stores, movie theaters and many small businesses are shuttered. Home sales are falling. Households are slashing spending. Consumer confidence is sinking.

With some signs that the viral outbreak may have plateaued at least in certain areas of the country, a few governors have taken tentative steps to begin reopening their economies. But surveys show that a large majority of Americans remain wary of returning to shopping, traveling and other normal economic activity. That suggests that many industries will struggle with diminished revenue for weeks or months to come and might be unable to rehire laid-off workers.

The Economic Policy Institute has calculated that about 70% of people who have filed for unemployment benefits since the virus struck have been approved. Applications from the rest may still be pending, or they might have been turned down. Some applicants may not have earned enough money in their previous jobs to qualify for unemployment benefits.

Thursday’s figures also showed that states have approved the benefit applications of nearly 18 million people. This figure is much lower than the total number of people who have sought unemployment aid since the virus struck, in part because it lags behind by one week. And not everyone who applies for benefits manages to receive them.

The viral outbreak “has made us accustomed and desensitized to previously unthinkable phenomena, but today marks a tough reality for our country and for American workers,” said Andrew Stettner, senior fellow at the Century Foundation.

Americans’ confidence in the economy and in their future incomes has plunged, a sentiment that could slow the rebound once more states and cities allow businesses to open. Many consumers, whose spending drives the bulk of the economy, may be slow to begin shopping, traveling and eating out. Some will likely remain too fearful of contracting the virus. And local and state officials are likely to maintain limits on the number of people who can congregate in certain places at any one time.

Consumer confidence, as measured by the Conference Board, has plummeted to a six-year low, and its measure of how Americans regard the current economy fell by a record amount.

Nearly a fifth of Americans expect their incomes to fall in the next six months, the Conference Board found, the worst such reading in more than seven years. That reinforced the belief that Americans will remain cautious in the spending for months to come.

In the meantime, the jobless are struggling to get by and secure their unemployment benefits.

In Sunrise, Fla., Jessica Salm had just started working at a Chili’s when the restaurant closed March 16. It took her six days to file her claim through Florida’s overloaded website. Her first unemployment check — $494 for two weeks — didn’t arrive until a month later. Before then, Salm relied on a $225 payment from her union, which she used to pay her phone bill. Her phone is critical: It’s how she applied for unemployment aid. 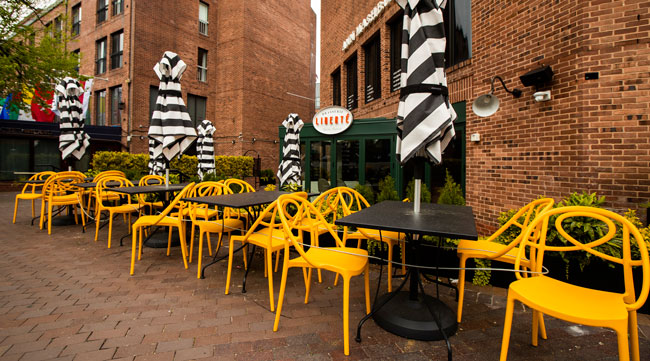 Salm, 36, has also received two $600 checks provided by the federal government’s relief package. But the benefits have all been used to pay her mortgage, car payment, car insurance, health insurance and the $1,500 credit card bill that she and her fiancé have built up. Salm hopes to return to work soon. But she fears for her health and isn’t sure what kind of business the restaurant will do.

“I’m not sure how that’s going to work with everyone still fearful,” she said.

In the United States and overseas, layoffs are mounting, with the airline industry still shedding jobs. Boeing announced this week that it would cut 10% of its workforce through layoffs, buyouts and attrition. The company has been hammered by the collapse in air travel and troubles with its 737 Max aircraft.

British Airways said it would cut 12,000 jobs, more than a quarter of its workforce. Scandinavian Airlines said it will reduce its workforce by up to 5,000 — half its employees.

In Europe, joblessness has reached 7.4%, the statistics agency Eurostat reported April 30. Millions of other European workers are being supported by temporary short-hours programs under which governments pay most of their salaries in return for companies agreeing not to lay people off.

Many laid-off workers in the United States are still struggling to obtain unemployment aid.

Early this month, Norma Ferrufino lost her job as a janitor at an office building in Washington, D.C., after having worked there for nearly 30 years after the building’s owner switched contractors. The new contractor rehired all her co-workers except for her and four other older employees, she said.

Ferrufino has applied for jobless benefits but has so far received only postcards saying her application is pending. She is desperate to return to her old job because there are so few other opportunities available now. Ferrufino, 54, also worries that businesses won’t want to hire her now that she is over 50. She also misses her former co-workers.

“They all hope I can come back,” she said through an interpreter, breaking down in tears. “I’ve known some for 28 years, it makes me so sad.”