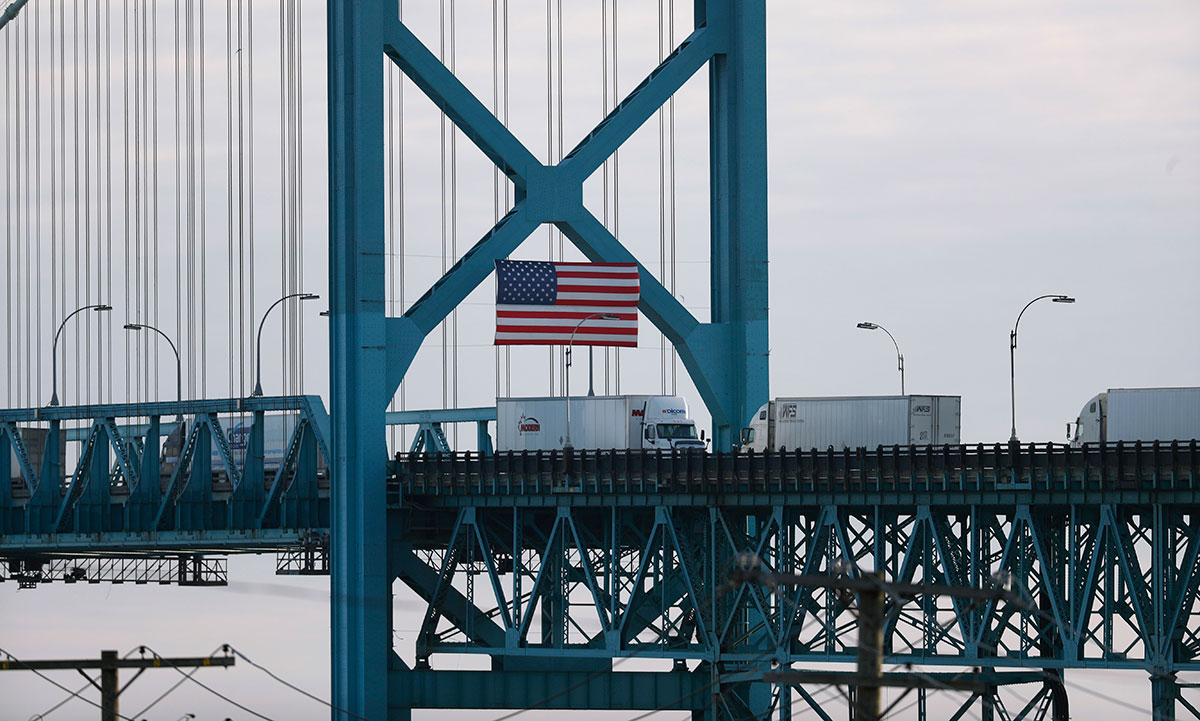 Truck crossings between the states of Michigan and New York and the province of Ontario were fairly steady last year, declining just .42% versus 2016 levels, according to a report from the Bridge and Tunnel Operators Association.

The association, known as BTOA, released 2017 traffic statistics between these two northern states and Canada Jan. 22. While there was a decrease in truck crossings, overall car crossings saw a .86% increase. Combined, there were nearly 34 million car, truck and bus crossings, marking a .47% increase from last year.

Ron Rienas, president of BTOA and general manager of the Peace Bridge Authority, described this year’s statistics as “basically flat.” The Peace Bridge, which links Buffalo, N.Y., to Fort Erie, Ontario, saw a .48% increase in car crossings and a 3.98% decrease in truck crossings, a decline that the report partially attributes to a lane closure that dominated the bridge for about half the year.

“It’s almost insignificant, both the increase and the decrease, in the overall scheme of things,” Rienas said. “When you look at the overall numbers, it’s pretty minuscule in terms of the overall change.”

Most of the goods traveling between New York, Michigan and Ontario are related to the automotive industry, according to Rienas. In particular, he said goods moving out of Detroit and down the Port Huron corridor frequently are involved in auto manufacturing. Port Huron, Mich., is about 55 miles northeast of Detroit and is located at the southern tip of Lake Huron.

In addition to automotive products, machinery and electrical equipment, Moncion said commodities moving between the United States and Canada include iron ore, coal, oil and potash. Potash, a source of soluble potassium, is primarily used as an agricultural fertilizer. Michigan DOT spokesman Jeff Cranson added that the state offers crops such as asparagus, cherries, blueberries and apples.

“Despite showing more momentum in the second half of the year, real [gross domestic product] increased by 1.6% over the whole year, the slowest growth rate since the 2011 recession. This could account for the decrease in truck crossings,” Moncion said. “The value of merchandise exports declined by 1.4%, with drops in most top transported commodities, such as potash and oil products. This can be attributed to modest performance on commodities struggling to regain value over the year, and to the modest economic performance of Canada’s main trading partners, particularly the U.S.”

Walter Heinritzi, president of the Michigan Trucking Association, noted that the stagnant numbers between Michigan and Canada signal the soft commercial demand between the United States and its northern neighbor. “Trucks go where the freight has to go. That business is going to go where the demand is,” he said.

More striking than this year’s numbers is the drastic drop in crossings between the U.S. and Canada since the Sept. 11, 2001, terrorist attacks, Rienas said. BTOA’s report found that overall cross-border traffic in 2017 was 35.4% lower than in 2000. The association’s 2000-2017 Comparative Traffic Volume Analysis reveals that there has been a 20.3% drop in truck crossings between 2017 and 2000.

“Post-9/11, the border changed pretty dramatically. Everything changed as of 9/11. We’re not seeing any increase in terms of the numbers since that time. That’s a pretty dramatic drop in traffic,” Rienas said. “What’s really telling is that all the projections in 1999 and 2000 were that traffic would continue to increase and that there’d be exponential growth in trade as a result of NAFTA and car traffic and everything else. In fact, the opposite actually happened.”

BTOA is a binational organization representing bridge and tunnel crossings between Ontario, Michigan and New York. Its members include representatives from various bridge authorities and transportation departments.