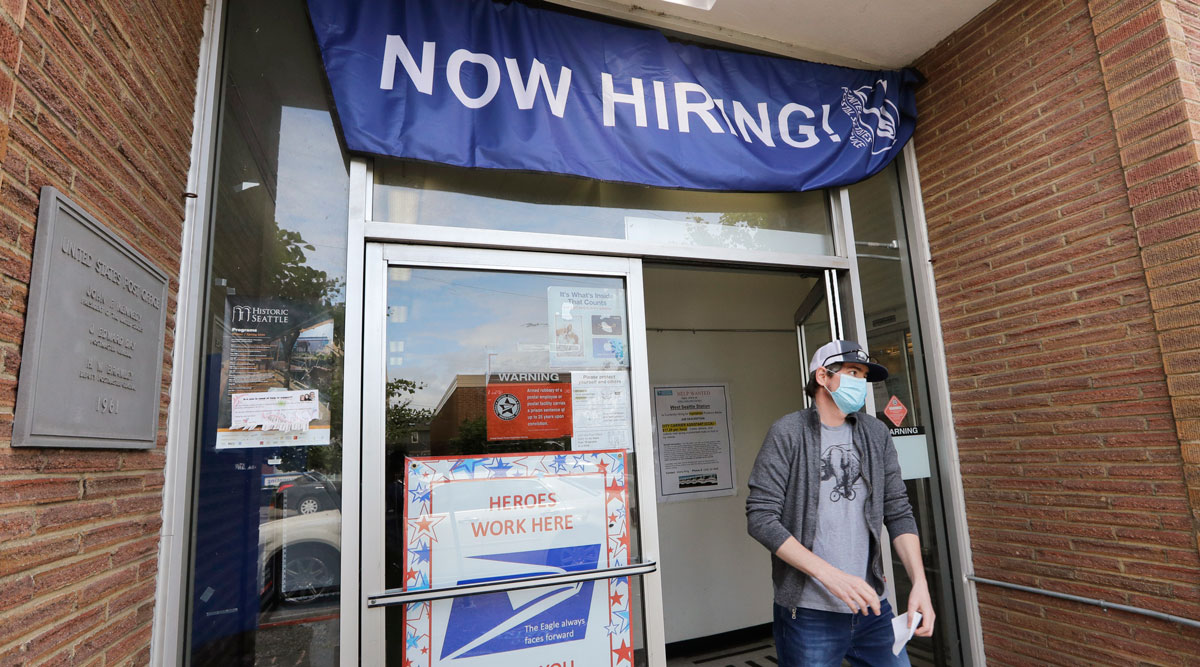 A customer walks out of a Post Office branch in Seattle on June 4. (Elaine Thompson/Associated Press)

WASHINGTON — About 1.5 million laid-off workers applied for U.S. unemployment benefits last week, a historically high number, even as the economy increasingly reopens and employers bring some people back to work.

The latest figure released June 18 marked the 11th straight weekly decline in applications since they peaked at nearly 7 million in March as the coronavirus shut down much of the economy and caused tens of millions of layoffs. The decline was much smaller, though, than in recent weeks, falling just 58,000.

The total number of people receiving unemployment aid also fell slightly, reflecting the return of many to their old jobs.

Still, analysts had expected a sharper decline in weekly applications, and some expressed disappointment that so many people are still seeking unemployment benefits even as restaurants, gyms and many categories of retail shops are reopening across the country.

“It does seem like there are many new people filing for unemployment, and this is worrisome when we are three months into the crisis and you are starting to see reopenings across the nation,” said Gregory Daco, chief U.S. economist at Oxford Economics.

The jobless claims report generally tracks the pace of layoffs. But it provides little information about how much hiring is occurring that would offset those job losses. In May, employers added 2.5 million jobs — a surprise increase that caught analysts off-guard because the number of applications for unemployment aid was still so high.

Daco said he expects the June jobs report, to be released in early July, to show another increase in hiring. But he said the June figures will be particularly hard to forecast. 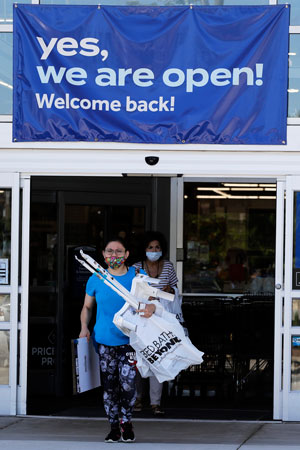 Millions of people, Daco noted, have likely been rehired thanks to the government’s small business lending program, which has made about 5 million loans to employers. But the actual number of recovered jobs depends on how many people those businesses actually rehired. And some companies may resort to layoffs again once they spend all their loan money.

Such a huge flow of people in and out of work, and the uncertainty surrounding it, make it hard to track where the job market is headed, Daco said.

The jobs report for May had suggested that the damage might have bottomed out. The unemployment rate declined from 14.7% to a still-high 13.3%. Employers added 2.5 million jobs.

Even so, nearly 21 million people are officially classified as unemployed. And including people the government said had been erroneously categorized as employed in May and those who lost jobs but didn’t look for new ones, 32.5 million people are out of work, economists estimate.

The June 18 report also showed that an additional 760,000 people applied for jobless benefits last week under a new program for self-employed and gig workers that made them eligible for aid for the first time. These figures aren’t adjusted for seasonal variations, so the government doesn’t include them in the official count.

Other recent reports have been more encouraging and suggest that the lifting of shutdown orders has sparked some pent-up demand from consumers, whose spending largely drives the economy. Most economic gauges remain far below their pre-pandemic levels, though, and some analysts question whether the recent gains can be sustained, especially if the virus were to surge back. 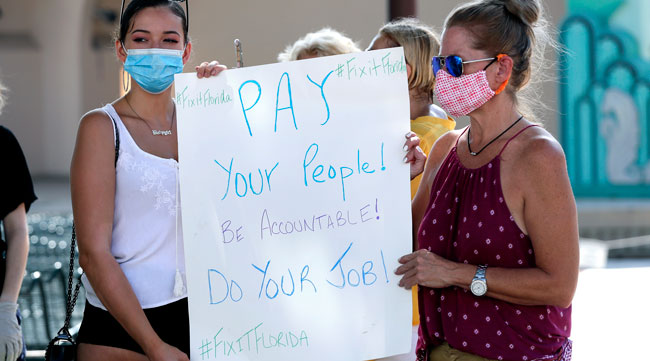 A group of demonstrators gathers in Florida to protest the state's unemployment benefits system on June 10. (John Raoux/Associated Press)

Last month, retail and restaurant sales jumped nearly 18%, the government said June 16, retracing some of the record plunges of the previous two months. Even so, retail purchases remain a sizable 6% below their year-ago levels.

Furniture store sales nearly doubled, and clothing sales nearly tripled, though both remain far below their levels before the coronavirus struck. Clothing store sales are still down 60% compared with a year earlier.

With nearly record-low mortgage rates, applications for home loans reached an 11-year high last week. But even though the number of homes under construction rose in May, they remain substantially below last year’s pace.

The economy and the job market face a raft of uncertainties that could slow or even derail a recovery. Business reopenings have caused spikes of viral infections in nearly half of states, a trend that could lead consumers to pull back again on shopping and dining out and reverse any economic gains.

Restaurants, bars, gyms and movie theaters will likely rehire only a portion of their workforces. Many consumers won’t fully resume their previous habits of shopping, traveling and going out until a vaccine is available.

“Recently, some indicators have pointed to a stabilization, and in some areas a modest rebound, in economic activity,” Federal Reserve Chairman Jerome Powell said June 16 in testimony to a Senate committee. Yet “until the public is confident that the disease is contained, a full recovery is unlikely.”

Corinne Cook, who lives in Kissimmee, near Orlando, felt a huge relief to finally receive her unemployment benefits last week after a month and a half of battling Florida’s bureaucracy.

Cook, 28, had moved to the area in September for an 18-month contract position as a 3D modeler for Walt Disney, a job involving sculpting character prototypes that were printed on 3D printers. But she was laid off in mid-April after the parks closed down.

She is receiving the minimum state unemployment benefit from Florida, $125 a week, because the state has no record of her prior earnings in New Jersey, even though she said she has uploaded, mailed and faxed her documents from her job there. If her previous earnings were properly credited, her state benefits would more than double. She is grateful, though, for the extra $600 in federal unemployment benefits, which have allowed her to pay off some bills.

“It was very stressful,” she said.