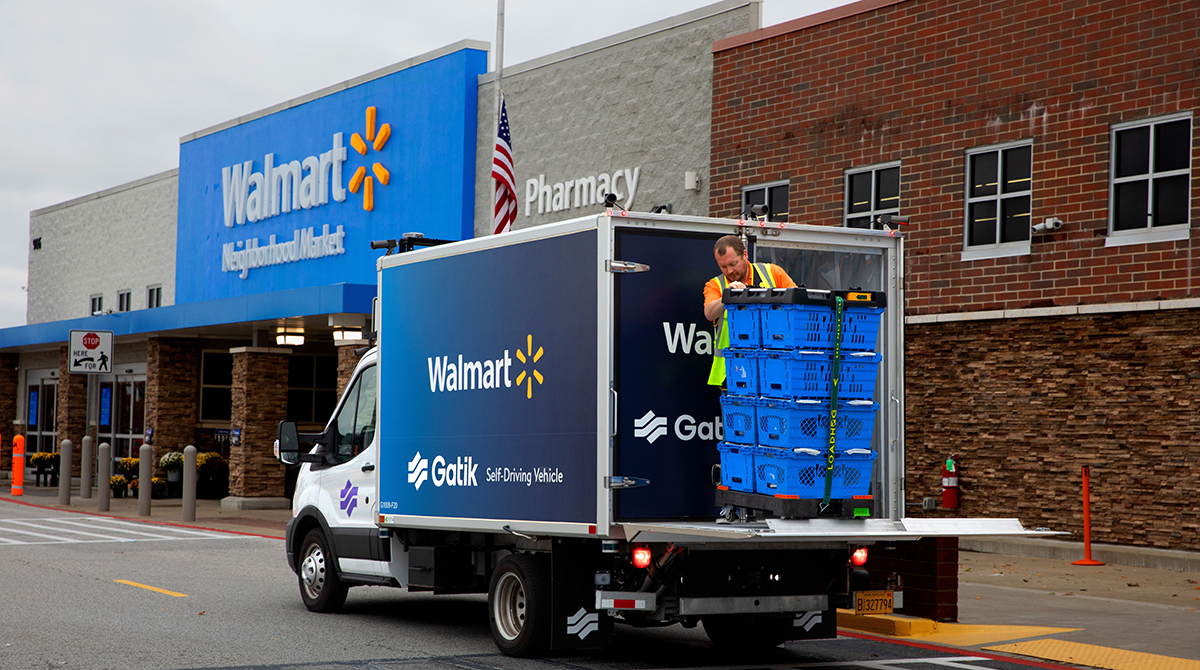 At the moment, the future of transportation is at the Walmart on Regional Airport Boulevard in Bentonville, Ark.

Near the Buttered Biscuit and the Cornerstone Baptist Church, a pair of delivery trucks have begun pulling up 12 times a day full of online orders sourced from a warehouse seven miles away. They carry everything from apparel to avocados but what’s most impressive is what they lack: a human driver.

Gatik, which owns and operates the rigs, claims the business is the first driverless cargo delivery, at least the first to generate revenue. “This is the milestone that our team has been working towards for the last four and a half years,” said Chief Executive Officer and cofounder Gautam Narang. “To my knowledge something like this has never been done.”

Rather than trying to engineer robot ride-hailing for people going from one arbitrary point to another, Gatik has focused only on cargo — and not just in a particular area, but on a specific route. It drove the Bentonville loop for more than two years, for example, before it took out the human chaperone.

The rig is programmed to take the most conservative route, not necessarily the most direct. For example, the machines decline an unprotected left turn on every trip, choosing instead to make three right turns.

“We truly believe in solving the middle-mile delivery problem, not the autonomy problem,” Narang said. “We can take unprotected lefts; we can do multiple lane changes, but it’s all about risk and exposure.”

Cargo, meanwhile, makes for an easier lift than passengers, both technologically and economically. Demand is easier to model, schedule and spread throughout the day than say a tide of commuters wanting to get home in a rainstorm. Guidehouse Inc., a global research and consultancy, expects automated vehicles will primarily be carrying cargo — not people — until 2027.

“The operating economics are much better suited to getting this stuff out there sooner,” said Guidehouse analyst Sam Abuelsamid. “I’m a little surprised more of these companies haven’t picked up on that.”

Gatik won’t have bragging rights for long. Cruise LLC, the autonomous driving arm of General Motors Co., won approval in September to start carrying cargo without a driver and it expects to get the go-ahead to take paying passengers around San Francisco in a matter of days. A week ago, Cruise cofounder and CTO Kyle Vogt hailed “Sourdough,” one of the company’s test vehicles, and took a driverless ride from Pacific Heights to Hayes Valley, almost two miles away. “This is officially ride #1 for Cruise,” he wrote on Twitter.

The car would have taken Vogt anywhere he wanted to go, according to spokesman Ray Wert, providing it stayed within the company’s operating domain, which still excludes much of the city. “We have to solve the hardest problem first,” Wert said. “We have to make it work in the most complex areas. And if it works there, it’s easier to scale to more simple, suburban areas.”

Most roads in the automated driving industry lead to Walmart. In addition to the Gatik program, it bought an undisclosed stake in Cruise in April, joining a $2.75 billion investment round. Meanwhile, it is also working with robotic giants Nuro and Waymo and recently enlisted a fifth player, Argo AI, to test last-mile deliveries in Miami later this year. It will add routes in Austin, Texas and Washington early next year, according to Argo spokesman Alan Hall. In Florida and Texas, Argo already meets the requirements for trips without a human, Hall said.

“We’re definitely not at an inflection point yet,” Guidehouse’s Abuelsamid explained. “But 2022 is the year that we start to see more of these commercial launches.”