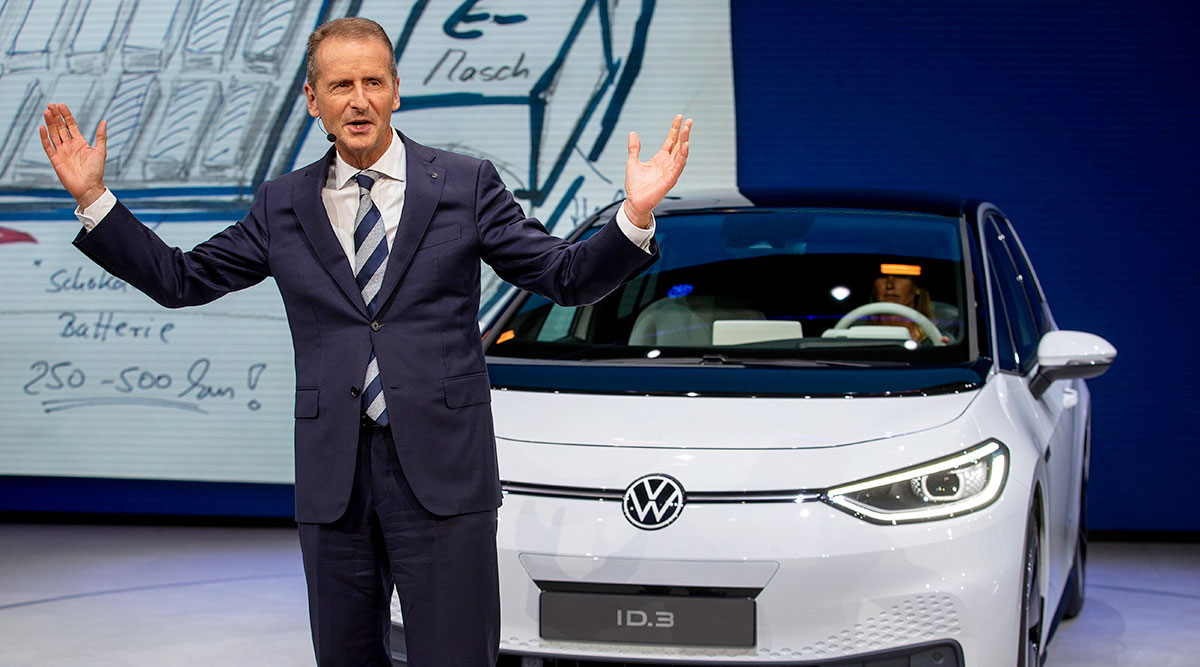 Volkswagen AG is unwrapping not just new models at the Frankfurt auto show, but a tweaked logo as the world’s biggest carmaker ushers in the electric era.

Little-changed since World War II, the new VW emblem was uncovered atop its headquarters in Wolfsburg on Sept. 9. And in Frankfurt, the manufacturer showed the VW brand’s battery-powered ID.3, the first model in an unprecedented $33 billion push to make electric vehicles for the masses.

The twin steps — both heavy with symbolism — reflect the high stakes involved in Volkswagen’s ambitions to become the world’s electric-car leader just four years after the diesel-cheating scandal plunged it into the worst crisis in its history. The carmaker aims for the ID.3 hatchback to become a trendsetter and take on similar status as its iconic Beetle.

“This evening is a decisive moment for us,” CEO Herbert Diess said from the podium. The ID.3 is meant to “take the electric car from being a niche product to the mainstream, making it accessible for everyone.”

VW is pulling out all the stops as it seeks to reshape its image. In Frankfurt, the gathered crowd was treated to vegan sliders with green buns and herbal concoctions garnished with thyme.

Diess called for the end of coal-generated electricity, among other planet-saving measures. “How can we save the world for our children?” read a query emblazoned on an entryway wall. 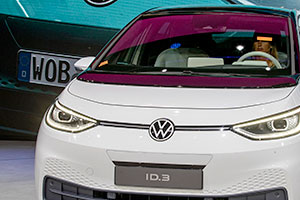 If things work out as planned, the ID.3’s technical underpinnings, dubbed MEB, will emerge as a new industrial standard for battery-powered cars, giving Volkswagen economies of scale that rivals would struggle to match. U.S. peer Ford Motor Co. already has agreed to use the technology for a high-volume car in Europe and is considering adding a second model. Diess sees nearly 50% of the group’s sales in Europe and China being electric in 10 years.

But if consumers remain on the fence about the cars because of range, charging and cost concerns, VW could find itself stuck with sunk costs, redundant factories and excess workers.

“VW’s bold electric vehicle plans scare this analyst given their huge near-term costs and uncertain demand,” Max Warburton, a London-based analyst with Sanford C. Bernstein, said in a note. Former patriarch Ferdinand Piech, who died two weeks ago, “would have argued that expensive investments in new technology tend to pay off in the very long run.”

The time for VW’s effort to reinvent itself is hardly favorable. A decade of almost uninterrupted growth for the industry — fueled mainly by China — has come to a grinding halt. Global demand for new vehicles contracted last year, and the trade war between the U.S. and China and uncertainty over Brexit is serving up yet more challenges.

“We really now come into situation where the trade situation starts to influence the mood of customers, and that could disrupt the market,” Diess said in a Bloomberg Television interview. “We hope there won’t be a recession.”

VW is tapping the brakes already, even as it still generates vast amounts of cash and profits. The manufacturer has scaled back production plans by some 450,000 cars for this year and has pledged to lower output further if necessary. VW’s cut roughly equals the annual output of one its 122 factories worldwide and exceeds Tesla Inc.’s delivery target for 2019 of between 360,000 and 400,000 cars.

Separately, the German giant has started to make gradual progress toward untangling its unwieldy corporate structure. It regrouped its car brands to focus on luxury cars and mass-market vehicles, and after some back-and-forth eventually completed a public listing of trucks unit Traton SE earlier this year.

In May, VW announced plans to review strategic options — including a possible sale — for the industrial machinery units Renk AG and MAN Energy Solutions. Analysts have urged VW to consider deeper changes, including an initial public offering of the high-margin Porsche brand, to unlock value. The sports-car unit, which is VW group’s most profitable division, will show off its electric Taycan model at the Frankfurt show after unveiling it last week.

Despite these efforts, investors are doubting VW and other carmakers’ ability to master the technological shift toward electric and self-driving cars. Diess has stressed the importance of reviving VW’s weak market value to help bolster the company’s case for acquisitions and partnerships.