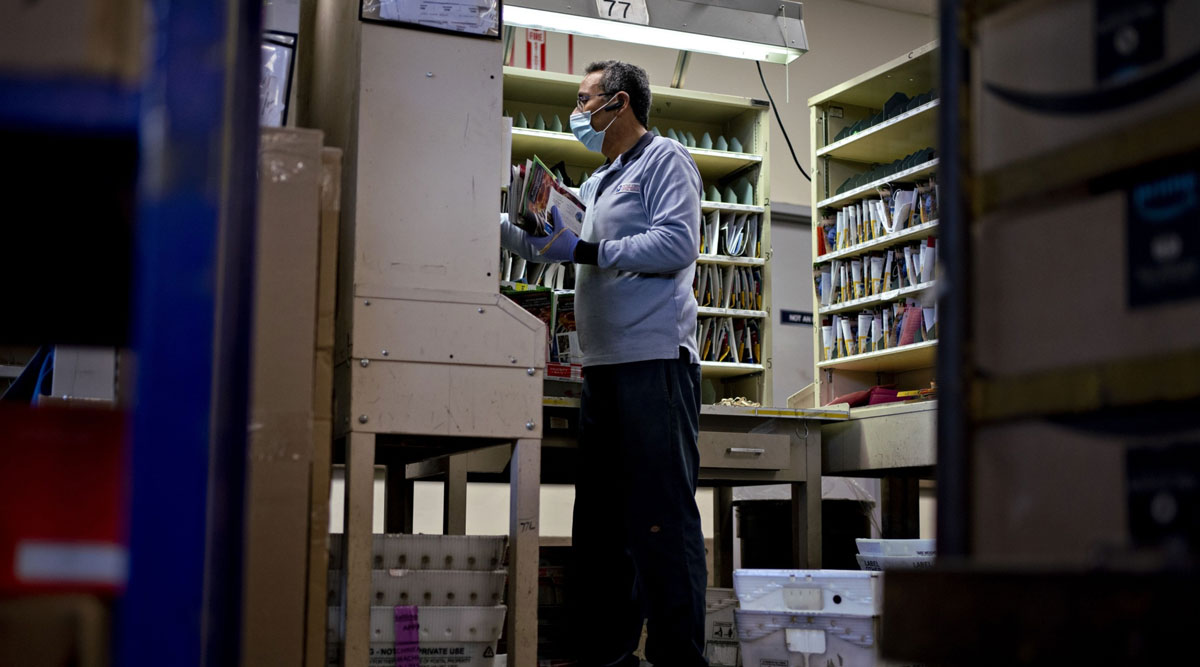 A letter carrier prepares mail for delivery at a USPS facility in Virginia on May 19. (Andrew Harrer/Bloomberg News)

The U.S. Postal Service overhauled its organizational structure, as Democrats called for an investigation into whether the changes implemented by President Donald Trump’s postmaster general pose a threat to mail-in ballots for the November election.

The announcement prompted criticism from Democrats, who have already raised alarms over mail delays that they worry will skew the election results if ballots aren’t returned in time. At stake are votes in 34 states — including almost all of the presidential battlegrounds — that won’t count mail-in ballots unless they are received on or before Election Day, even if the ballots are mailed on time and subject to post office slowdowns.

Interest in voting by mail is expected to spike this year as many Americans try to avoid public settings, such as polling-place lines, during the coronavirus pandemic.

“This is deliberate sabotage to disrupt mail service on the eve of the election — an election that hinges on mail-in ballots,” said Rep. Gerry Connolly, a Virginia Democrat who chairs the House subcommittee on government operations. “Postmaster General DeJoy should be focused on ensuring delivery standards, not this Trojan Horse reorganization.”

Connolly was among Democrats, including Massachusetts Sen. Elizabeth Warren, who wrote Aug. 7 to the Postal Service’s inspector general asking for an investigation into staffing and policy changes implemented by DeJoy, a Republican donor appointed in May.

Democratic Rep. Carolyn Maloney of New York, who also joined the letter, said Aug. 8 in a statement that the operational changes at the post office were “inappropriate” so close to the election.

“The drastic changes to the Postal Service by an overtly partisan Postmaster General are another example of the president’s attempts to prevent millions of Americans from having their votes counted,” she said.

The Washington Post reported that the Aug. 7 reorganization reassigns or displaces 23 postal executives and centralizes power around DeJoy.

The Postal Service on Aug. 7 reported a quarterly net loss of $2.2 billion on revenue of $17.6 billion, compared to a net loss of $2.3 billion in the same period last year.

Additional money for the post office has become one of several sticking points in negotiations between top congressional Democrats and the Trump administration over a coronavirus relief package.

USPS: Election Is at Risk Over Conflicting Injunctions