The Urban Garbage Truck Gets a High-Tech Battery Makeover 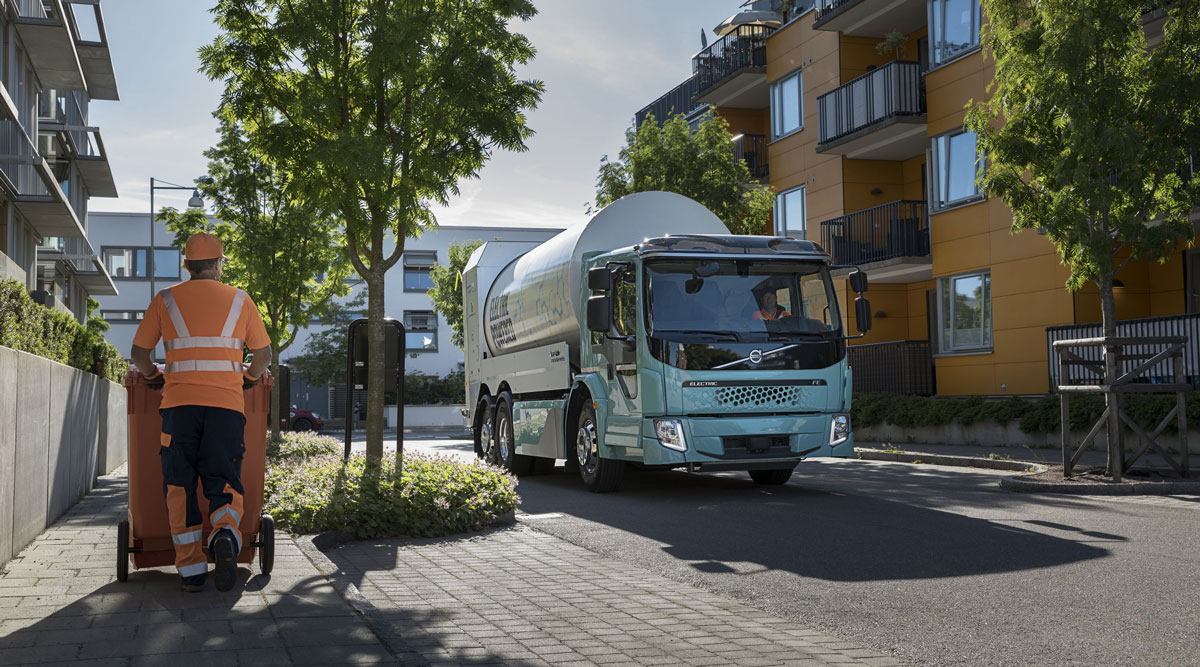 Automakers from Tesla Inc. to Ford Motor Co. are developing ever-sleeker, futuristic-looking electric cars. Volvo AB has something a little different in the race: the battery-powered garbage truck.

The Swedish company will start producing electric versions of its brawny trash haulers next month starting with Europe, with cities from Hamburg to Gothenburg to Zurich already signed up to buy. Volvo says it expects its two new electric models, which can be used for a variety of heavy-duty urban jobs, to do well because they’re emissions-free and much quieter than diesels, whose engines fire up when they lift a dumpster.

“We believe this technology can be a large contributor to reducing emissions,“ said Anna Thorden, product manager for electric mobility at Volvo Trucks. “Electric trucks are beneficial for drivers, cities and the global climate.”

While diesel remains the most popular fuel source for trucks, ahead of natural gas, it faces restrictions that will likely boost demand for battery-powered vehicles, said Nikolas Soulopoulos, an auto analyst at BloombergNEF.

City centers are becoming increasingly hostile environments for combustion vehicles. Paris, Madrid and Hamburg have already introduced limited bans on older diesel cars, and Barcelona, London and Rome plan to keep them out altogether by the end of this decade.

“For these kind of jobs, electrification has a real potential,” Soulopoulos said. “Cities are worried about air pollution and are making it much more expensive for diesel trucks to come in.”

Volvo is offering two versions, one weighing 16 tons and a larger model clocking in at 27 tons. The company wouldn’t say how much they will cost, though Soulopoulos estimates the sticker prices for the first generation of heavy-duty e-trucks will be about double their diesel equivalents. But by the middle of this decade the total cost of ownership will be about the same due to their lower maintenance costs and fuel consumption, BNEF predicts.

It’s not just the purchase price that operators need to consider. Buyers must also set up a charging infrastructure, adding to the already higher up-front investment. But Volvo says customers should also count incentives including tax breaks and lower toll fees in some regions, cutting the lifetime cost of the vehicle. Moreover, batteries are rapidly becoming more powerful and more affordable, meaning ranges and potential applications will multiply in coming years, Thorden said.

In Europe, the U.S. and China, Volvo faces growing competition from rivals also working on rigs ranging from long-distance freight haulers to urban vans to stop-and-go workhorses such as garbage trucks.

StreetScooter, a German startup bought by Deutsche Post AG in 2014, developed a no-frills electric delivery van that turned into a surprise hit. Tesla in 2017 unveiled the Semi, a longhaul e-truck that can accelerate from zero to 60 mph in 20 seconds (production hasn’t started yet). And BYD Co., the Chinese electric-vehicle maker backed by Warren Buffett, has a range of e-trucks on offer for freight delivery and waste management.

Daimler AG, the No. 1 globally in conventional heavy trucks, this year plans to show customers an electric version of its popular Mercedes-Benz Econic truck.

The new variant can be adapted for a variety of jobs — starting with one for quieter and cleaner garbage collection in cities. The company will begin testing the truck next year and expects to start serial production in 2022.