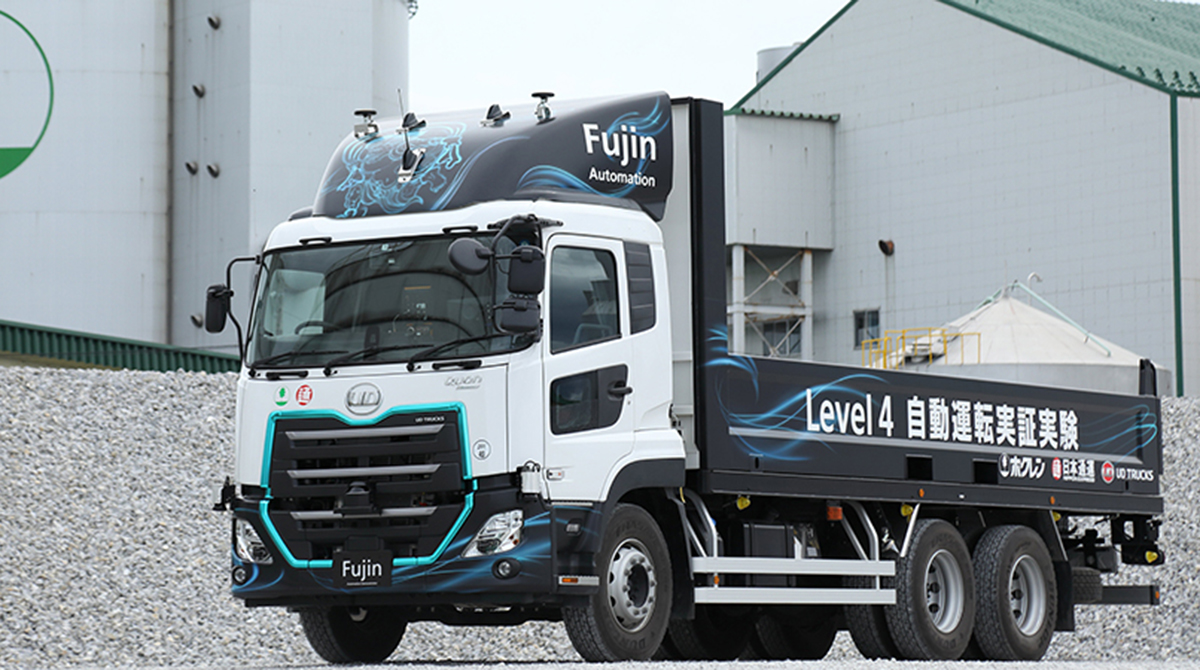 Japanese truck maker UD Trucks, a unit of Volvo Group, announced it showcased Level 4 autonomous driving together with the nation’s largest logistics firm and a 100-year-old agricultural cooperative — calling the technology an important tool to address the contracting work force.

The demonstration took place at the Hokuren Sugar Refining Mill in Nakashari, Hokkaido.

A specially adapted Level 4 heavy-duty Quon model from UD Trucks operated on a typical delivery route from the entrance to the produce acceptance area, interim storage and the final unloading area at an average speed of 20 kph. The route included a distance of 200 meters on a public road — a first for heavy-duty trucks in Japan.

“Japan’s growing labor shortage is a serious issue that must be addressed. By combining the expertise of commercial vehicle manufacturers, logistics companies and the agricultural sector, we believe that autonomous driving technology can play an essential role in finding the solutions we need,” UD Trucks President Takamitsu Sakamaki said.

SAE International has defined Level 4 autonomous driving as a truck that can drive itself under certain conditions without any driver input or backup assistance.

The shortage of truck drivers now poses a great risk to the stable supply of not only sugar beets, but also broader agricultural and livestock products produced in Hokkaido, of which 3.5 million tons are shipped outside the prefecture every year. Securing a stable transportation network connecting Hokkaido and other destinations is critical, according to the Ageo-based company.

“We have high hopes that the introduction of autonomous driving will help secure transportation capacity needs in the near future,” said Hokuren Federation of Agricultural Cooperatives President Kazuyuki Uchida.

Meanwhile, Japan’s agricultural sector has various other issues to deal with such as a decrease in the number of farmers and an aging population, a decrease in cultivated land area, labor shortages at production sites, market-opening pressure in international trade negotiations and agricultural cooperative reforms, according to the cooperative.

The Quon vehicle employed network-based RTK-GPS (Real Time Kinematic Global Positioning System), an advanced version of GPS that allows for a high localization accuracy. By combining network-RTK with autonomous driving technology, it is possible to achieve higher precision in vehicle operation even in bad weather or on poor road conditions.

Widespread implementation of this technology also is a key area of focus for Nippon Express, which established its own logistics engineering strategy office in 2017. The company has been active across a broad range of areas, including truck platooning using automated driving technology, unmanned logistics centers that reduce labor costs, and logistics solutions that utilize artificial intelligence, drones and advanced tracking systems. Nippon Express is Japan’s largest global logistics company, with 705 locations in 302 cities in 46 countries.

“We have been working hard, together with our customers, to improve the efficiency of logistics, but the shortage of drivers has become more and more serious. We would like to look deeper into the practical applications of autonomous driving technology in various business areas, based on the outcome of this latest trial,” said Nippon Express Chief Operation Officer Hisao Taketsu.

Also, Japan is intent on playing a leading role in drone technology, producing a national road map for its development and studying ways to define and advance regulations. In August, a flying car made by NEC Corp. hovered off the ground for about a minute, Bloomberg News reported.

The vehicle is essentially a large drone with four propellers that is capable of carrying people. The Japanese electronics maker demonstrated the machine, flying without a passenger, at a Tokyo suburb. Powered by a battery, it rose briefly to 10 feet above the ground before setting down.